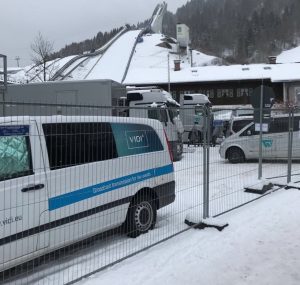 SVG Europe is delighted to announce that VIDI GmbH – a leading service provider and expert in technical consulting, project planning and systems integration in the converging broadcast and telecommunication industries – has renewed its Gold level sponsorship for another year.

With a particular specialism in video transmission, VIDI’s experienced core team works with seasoned outside specialists who have years of industrial and technical expertise relevant to the planning of complex projects such as the transmission of international sport events.

Explaining the decision to continue its association with SVG Europe, VIDI GmbH director event services Robert Oszvald comments: “We renewed our sponsorhsip with SVG Europe because we see this as a great medium to be seen as one of the leading major sport event providers in Europe.

“In terms of current/recent projects, we had a successful Confederations Cup in 2017 and are now looking forward to an even more challenging World Cup in Russia. [In addition] we have renewed our partnership with the EBU. For the first time in two years, VIDI devliered the two German ski-jumping events (Oberstdorf and Garmisch-Partenkirchen) on the Four Hills Ski Jumping Tour to Eurosport on behalf of EBU, as well as for ORF, ARD and ZDF.

“Our partnership with SVG Europe [contributes to this ongoing] success within the major sports events business.”