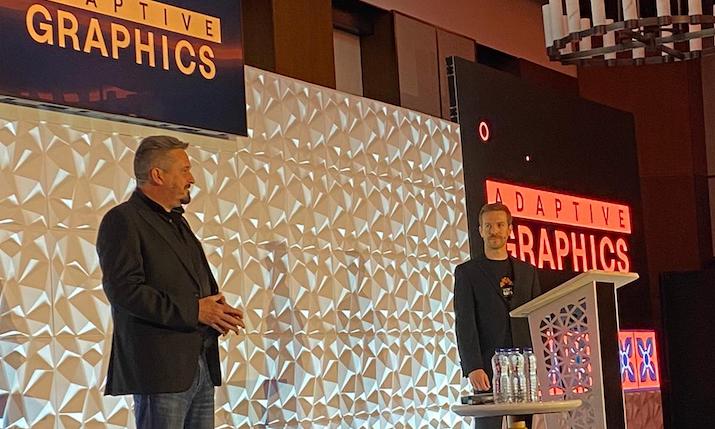 Vizrt has revealed details of the latest version of its Viz Engine live graphics compositor. Version 5 boasts a host of new features, including a revamped integration with Unreal Engine 5 and a reworked clip playback experience, but it’s the concept of adaptive graphics that looks set to have the biggest impact, particularly in the sports world.

Adaptive graphics is described by Vizrt as, “single workflow, multi-platform content delivery that automatically adjusts resolution, format and layout to support specific display devices, ensuring the graphics are optimised for the viewer”. This effectively enables graphic artists to create once and publish multiple times, saving time, reducing errors and improving the quality of production.

As Gerhard Lang, CTO at Vizrt, explains: “Viz 5 with adaptive graphics, obviously for sports that is an interesting one. Tik-Tok, for example, is becoming a more and more relevant channel for quite a few sports production, whether it is live or for the first replay, and we got quite a few requests from that.

“We’ve been watching and following for a while the move to square or smaller format 16:9 productions. There’s a huge difference between watching UHD on a big screen and watching on a small mobile phone. But viewers still want to have the most relevant information available to them in the most visually appealing form.”

This need fits into the Vizrt ethos, according to Lang: “We’ve always been about making the creation process easy, making the production easy, simplifying the workflows and so on, but always keeping the focus on delivering the best looking graphics. And we extend this functionality to formats that have not been so prominent for our broadcast customers.” 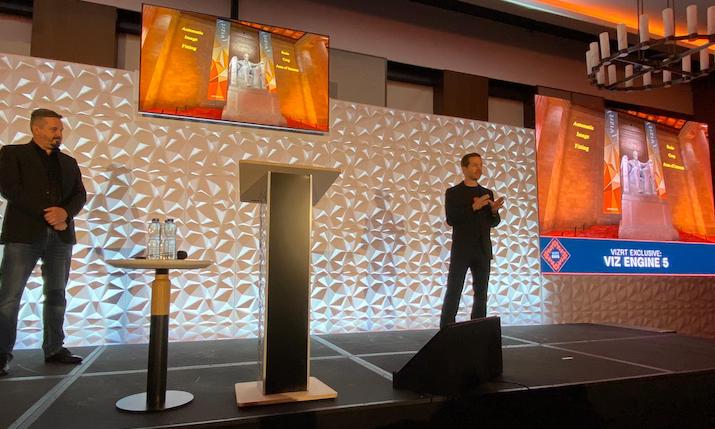 While solutions already exist that enable the production of graphics for vertical or square videos, the drawback was that users needed to keep the scenes separate.

“It was a little cumbersome in terms of managing the process, designing it, reviewing, doing quality control on it and so on, so with Viz Engine 5 we are introducing the concept of adaptive graphics in the Vizrt portfolio,” he adds.

“The core of it is, of course, an engine that has all the functionality in there that allows you to store the scene with all the attributes that control the scene. It has also helpful functions that allow users to order the log system to make auto suggestions on what it thinks the best layout would be. All of this can be modified and changed by the designer to fit their exact needs.”

Changes are also visible in the user interface, which makes its clear what was auto suggested and what has been modified so that the formats fit the production format. All of the variations of the graphic can be made visible to the user at once and there are no limitations on numbers.

“It’s completely up to the user to decide how they wants to parameterise those formats,” Lang explains. “This goes forward because it also allows you to use the same set of graphics but with different branding. This means you can make sure that graphics are consistent in functionality and appearance and so on. It’s a real cost and time saver, plus, it also reduces the amount of errors that can be made.”

This functionality spans the whole process from the creation of templates that control the graphics, through to playout. Trio is the first control application that is adaptive graphics aware.

“Adaptive graphics, for us, is an enabler for adaptive storytelling,” he continues. “We need to fix the graphics part first. But obviously it is also important to do the complete compositing of all the different layouts of sources that you require either for live or for instant replay in a fashion that is suitable for that format.

“Of course, we want to reduce the number of operators and the costs that are required for such a production to the bare minimum, but without compromising the quality. So we did some tests. We had a combination of several AI technologies that assist the operator in choosing the right cutouts of either the clean feed or camera one of a soccer game, for example, to show it in a vertical video.

“We found that tracking is the operator who follows the most interesting part of the game. And then they can basically choose ‘I want the cutout to follow my eyes’, or they can have object tracking, which is our AI object tracker, active as well, and you tell it what it should follow. Whether in motorsports or in soccer, there’s not much difference – we can detect quite a few different objects right off the shelf. But you can also train those AIs to be better when producing for a specific sport. For example, we did that with NASCAR. The advantage of specialised networks or trained networks is that while usually all of the object needs to be visible for the object trackers to recognise and follow them, even if you have partial occlusion and so on, this still works.”

Lang also highlights the enhancements in the area of fonts as a, “super-important aspect” of Viz Engine 5.

“We started rendering fonts, many, many years ago as geometries and textures and so on, but we saw that with HD the quality was not what we wanted it to be,” he recalls. “So the latest iteration before the Fusion deck was what we called the Razor font, which was already shader-based font rendering. Now, inside Fusion, we redid everything and created a font renderer that will give you the best representation of a glyph independent of the size in which it is rendered. It’ll be super crisp, super sharp, you can scale it down to a very small size, but you can use the same font also on a large video wall, and the representation will be spot on.”

“These variable fonts can be modified in many ways, so that depending on which format you’re using, the font representation or glyphs rendering is optimal for that kind of format,” explains Lang.

When it comes to graphics in sports, the growth in AR has also been considered. “A lot of sports broadcasters are using statistics information, on-field AR graphics and so on,” he adds. “The Fusion deck is something that can be used for 3D fonts or text as well, so extrusion is already there. But it’s using the same technology, meaning that the crispness and clarity of the fonts gets preserved even if you take them from a 2D representation into a 3D representation.”

According to Vizrt, Viz Engine 5 also offers the most advanced integration with Unreal Engine 5, making it possible to blend the two render paths into a single, powerful graphics workflow that is greater than its component parts.

“We’re getting more and more requests from sports broadcasters for UHD HDR productions and this was one of the bottlenecks that we had before with the Unreal integration. Now with Viz Engine 5 and Unreal 5 we have made a lot of progress on the performance, meaning we could reduce the latency of the systems, plus we enabled up to four UHD live or clips or other assets to be used inside the Unreal Engine. At the same time, we made advances on many other fronts of the integration as well.”

With the new integration, it is also possible to choose where things get composited. “So, for example, in Engine 4, everything got brought back into Engine and the compositing happened there. This requires additional computational steps and also some information that is not too easy to transport from Unreal back to Engine without getting lost. With the new integration, you can choose between many random sequences, and a few of them allow you to do compositing over on the Unreal side.

Other new features include the ability to save the Unreal scene inside the graphic hub. Lang explains: “So if you have a large production, maybe four or five Engines being set up for AR on the sports menu, or in the studio, you can now utilise the functionality that is native to the graphic app, like replication, deployment, synchronisation and so on. We make sure that once an Unreal asset is being stored in there, it gets distributed and can be loaded from all Engines that require that asset, without that cumbersome manual copying, making sure that nothing gets forgotten. It’s just making the whole setup way safer to operate.”

This simplicity and security is applied to all aspects of Viz Engine 5. “It’s about making making life easier, making the system more performant, bringing down the latency, but also enabling better formats and making use of the latest and greatest functionality that is exposed by Unreal Engine,” concludes Lang.