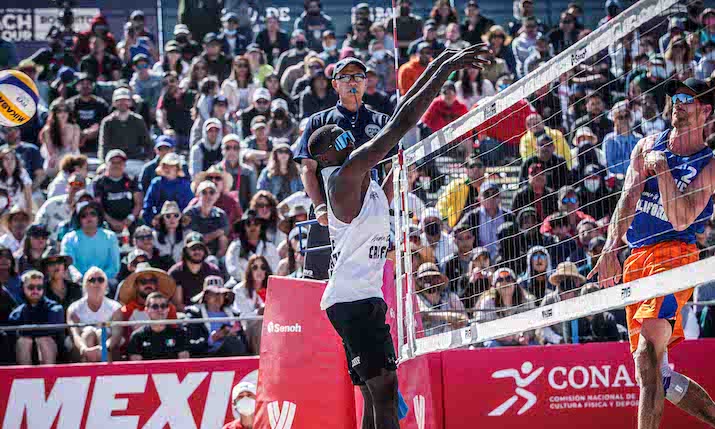 Volleyball World, creators of an integrated ecosystem connecting all volleyball stakeholders (fans, athletes, corporate partners) through both digital and live events, has turned to LiveU to bring cost-effective coverage of its global beach volleyball tournaments to viewers around the world.

LiveU Matrix is a next-gen cloud video solution allowing users to share and receive high-quality, low-latency live feeds with, and from, broadcasters and other stakeholders around the globe – inside or outside their organisation.

Roy Hasson, director of solutions sales at LiveU, said: “We delivered an end-to-end solution, supplying the feeds from the event locations to the various takers around the world. We provisioned and routed these via Matrix, using LRT [LiveU Reliable Transport] as well as SRT on the output side. We also integrated a remote commentary solution, Spalk, which was seamless, providing a completely smooth IP workflow, while maintaining high-quality and very low delay from the camera to the final taker. This type of delivery allows significant cost reduction and flexibility to our clients compared to the previously used traditional methods. This was the first of its kind at this magnitude for a sports event and there was great collaboration by all parties involved.”

LiveU deployed LU800s as multi-camera encoders on-site, connected via both LAN and WiFi, with cellular connectivity for backup. The company’s technology can easily switch between these networks providing tremendous, seamless resiliency.

Hasson added: “With LiveU, you get two in one: the main and the backup via alternative network connectivity. This is in addition to the redundancy provided by using a second LU800 encoder.”

Finn Taylor, CEO Volleyball World, said: ‘’Beach Pro Tour tournaments are held all over the world meaning the look and feel of each competition can change on a weekly basis. With the help and support of LiveU a lot of work has been done to solidify the event presentation and ensure consistency for those who are watching the broadcast at home.’’

While most of the takers were already LiveU users, for those who weren’t, it was easy to quickly establish a cloud server. Indeed, during the event there were takers (broadcasters and others) who wanted a feed as the tournament progressed. LiveU also offered the ability to distribute the signal beyond broadcasters in other formats.

Nils Sørensen, VP broadcast at Nent Sports, said: “As one of the takers of this Mexican beach volleyball tournament, it was very easy to use Matrix to do so. It provides a clear interface and effortless IP connectivity. We were very impressed and see this as an important and cost-effective way of receiving and sending content in the future.”

Hasson said: “Working with Volleyball World to understand what they wanted to achieve, it was clear that empowering increased flexibility and dynamism of their coverage across the year was one, which, using this workflow they can do without it being a huge, logistical exercise.”

Motasem El Bawab, head of digital, Volleyball World, said: “From the start we wanted the Beach Pro Tour to be an end-to-end digital product for the fans and our stakeholders, using LiveU and its fully managed service. Those working across sports will know the huge complexity and impact of traditional distribution methods. LiveU negated all of that. From start to finish this event ran exactly as it should have done. And that’s not to mention the very considerable cost savings over traditional distribution methods. We are very impressed with LiveU and want to expand our architecture and offerings to other events.’’