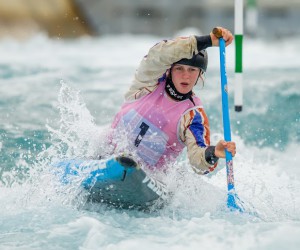 Later this month 300 of the world’s top Canoe Slalom athletes will compete at London’s Lea Valley White Water Centre in the largest global canoeing event outside of the Olympic Games. Starting on 16 September, these competitors, drawn from more than 50 countries, will spend five days tackling the technically demanding Olympic course – the venue for Team GB’s double-medal triumph at the 2012 Games. In last year’s Canoe Slalom World Cup, the British team achieved an impressive one silver and seven gold medals.

As well as World Champions being crowned in five disciplines at Lea Valley, the event serves as part of the qualification process for the 2016 Rio Olympic Games.

Canoe Slalom involves negotiating through a series of 25 gates placed along a 300 metre white water rapid. The paddlers need to race as fast as they can through the gates while meeting the challenges of waves, stoppers and eddies. Time penalties are imposed if a gate is touched or missed altogether.

Television coverage of the demanding Lea Valley event will be provided by Geneva based, Hit the Roof. Co-founder and executive producer for the London event, Cédric Roger, reveals that the unusual name of the company originated from the location where he and two associates were discussing setting up the venture. “It was a French-style building – one of those where if you were taller than one metre twenty, you banged your head on the ceiling.” 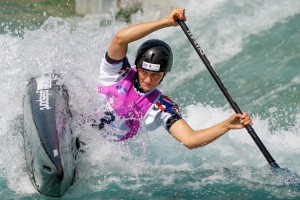 He continues: “We were founded in 2003 as a consultancy. We operate throughout the world and form partnerships with various sports federations, enabling them to achieve the maximum exposure on television. We are very discreet and go about our work without getting on the frontline. By increasing the exposure for organisers, it maximises the opportunities for sponsorship and other activities in these sports.”

By working with the organising committees, the coverage of events is provided free-of-charge to broadcasters. Those taking the programming are simply charged with certain satellite costs. The more broadcasters take the coverage, the smaller the share of the charges.

He goes on: “When we are working with the world archery federation, we become WAFTV, or if with the wrestling authorities, WWTV and so on. So basically it’s maximising the visibility of these federations, and in doing so we have set the benchmarks for coverage of many of these events.” 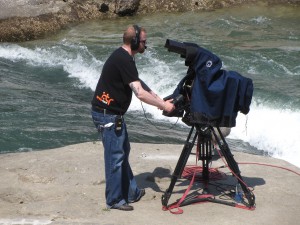 A Hit the Roof cameraman in position to capture the canoeing action.

Although Hit the Roof started planning this London event six months ago, it has been working with the International Canoe Federation for several years. Roger says that one key to its success has been the use of the same crew members for specialised events. “This is important when it comes to the technical aspects of sports such as canoeing. We need camera operators who understand what is going on during all parts of the competition. It’s even good if they can read the nuances of the weather! But what’s more, it is good for the organisers to see familiar faces and develop confidence in the crew’s ability to provide the very best coverage. So we use the same people, wherever in the world we are operating.”

Alongside Roger is director Svenn Kuchen. “He is the only one who is allowed to oversee the live portions of the coverage. He is assisted by two vision mixers who are equally conversant with how the canoe slalom championship works.”

Although Hit the Roof was not involved with canoeing at the London Olympic Games (it was covering archery at Lord’s cricket ground for the duration of London 2012), Roger has become familiar with the Lea Valley venue. “It is an ideal location for this type of action – I’d say probably the best in the world. And it can very readily accommodate television needs.” 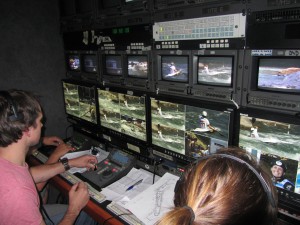 Hit the Roof is bringing its own OB truck from Switzerland for the Lea Valley event.

Hit the Roof is bringing its own OB truck from Switzerland for the event. “Strangely, that turns out to be more economical than hiring locally in the UK,” states Roger. “The unit will arrive on the Sunday before the start of the championships to organise power and lighting. Over the following two days we will rig the cameras and other kit.”

Thirteen cameras will be utilised in total, with one being a super slo-mo Sony 3300. Three EVS units will be deployed for replays, including a Nano controller. This will be the first occasion that Hit the Roof has used this unit attached to the high-speed slo-mo camera.

“We will be providing English language presentation and commentary as part of our commitment. Working alongside our commentators will be experts in the particular discipline that is being shown at that time. This English language coverage is especially relevant to countries – Australia and New Zealand, for example – that might be showing the races in the middle of night. It means they do not need to have their own commentary team on hand at that inconvenient time.”

For those broadcasters who need to overlay their own language commentaries, the world feed will be available with an effects-only track.

The importance of correct start times, the duration of each participant’s efforts, penalty points and similar data, means that the onscreen graphics for the whole championship are fed directly from the event organisers. This data is provided through SiwiData, the Italian company founded in 1983 to provide basic results services for small sports events. SiwiData has developed its own technology to create high quality broadcast graphics that can be placed in a downstream keyer on the OB van’s vision mixer.

“It is mandatory that all broadcasters take the dirty feed so that the right graphics are always displayed,” declares Roger. “All this helps increase the understanding of the sports by the audience.”

Alongside the live broadcasts, Hit the Roof is responsible for producing highlights programmes. These will also include a scene-setter programme before the Championships begin. Shots of London and the Lea Valley venue will then be used for the opening titles for each day’s broadcasts. Each race day will conclude with a 5-minute highlights programme, whilst a 26-minute production will be available at the conclusion of the event.

“We are editing the highlights programmes on Adobe Premiere, while clips for news organisations will be produced using Final Cut Pro,” says Roger.

As well as the broadcast television coverage, the International Canoe Federation has a comprehensive internet presence and will be providing second screen services encompassing results and other relevant data during the Championships.

Roger concludes: “We have developed the skills in these infrequently shown sports to ensure that they receive the very best coverage that is possible. We set up the company to do just that – and we are succeeding.”