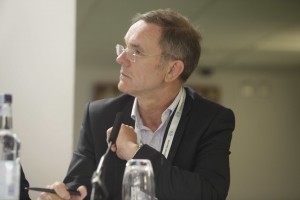 This year’s Wimbledon Championships saw IMG Media further extend its array of broadcast services to the tournament by undertaking an experiment in remote production to expedite the access of footage by participating broadcasters.

“Space is at a premium in the broadcast centre at Wimbledon, so we are definitely on the lookout to see if any elements can possibly be taken off-site,” says David Shield, global director of engineering & technology for IMG Media.

On this occasion, efforts centred around the EVS-based central content store (‘CCS’) that IMG has been evolving for some years now, which combines extensive footage from previous tournaments as well as the current Championships. “It can be accessed only by participating broadcasters and the idea is that they browse within the store and then undertake a file transfer to their own EVS systems,” explains Shield.

For the 2015 tournament, IMG decided to experiment with editing its digital content at its production hub in Stockley Park, north of London, using raw footage on the Wimbledon-based CCS. “We established a 100MB raw data link between sites as well taking an additional, 500MB capacity through the EBU’s Nimbra-based fibre network as back-up,” adds Shield.

At Stockley Park, three desktop stations equipped with Adobe Anywhere were used to browse material and undertake various editing duties, including the creation of short highlight-style clips. Material was then distributed back to IMG in SW19, where it was transcoded for use on Wimbledon’s own website.

Shield allows that there “were some system issues” during the first week, but that these were resolved by the tournament’s mid-point and that overall the trial can certainly be counted as a success.

IMG also implemented a process of transferring archive material from mainline storage to a small SAN in order for it to be transferred back to Stockley Park for ingestion into the IMG MAM. “This helps the archive sales people as the greatest number of sales are made right after the tournament, meaning that they benefit from having access straight away,” says Shield.

These changes also helped to accelerate the production of the annual official Wimbledon film – in essence, a 90-minute chronicle of the tournament’s milestone moments.