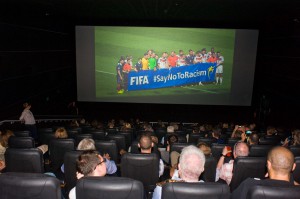 The French and German teams on screen in the Vue cinema

The FIFA World Cup final was viewable in Ultra HD in London on Sunday to members of the public at the Vue Westfield cinema, following a successful trial before an invited audience for the Germany-France quarter-final. The final was the third match from the World Cup that Sony has produced in UHD, and “is the largest scale live transmission that we have yet done in 4K,” said David Bush, Marketing Director, Sony Professional Solutions Europe.

“We have a team of about 45 people working on the 4K production in Rio,” including Sony staff, Globosat Brazil, which has just built a 4K production vehicle, and Telegenic. “Sony is also very much involved in all of the HD production [64 matches], which is itself a major undertaking.”

The 4K workflow is a parallel set up to the HD production at the Maracana stadium, and Sony used 12 F55 4K cameras, plus one F65 camera, which was running in 2x (120fps) for slow motion effects (this was shown for the first time at NAB, and has only recently started being used for real productions).

“We’ve been working for a long time on optimising the production side,” he added. “That’s been a long process over several years, with different trials, including the Confederation’s Cup last year.”

Probably the most interesting aspect of the three UHD transmissions has been the use of High Efficiency Video Coding/H.265 to compress the satellite link from Rio. Bush admitted that there were some challenges with the satellite transmission.

“There’s a number of elements of prototype equipment in the chain, including new input cards for our digital projectors and new decoders from IDC [International Datacasting]. Some of the challenges that we’ve had to overcome relate to the use of HEVC as a new compression scheme. 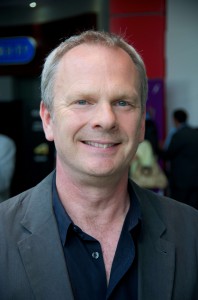 “We’ve only had a couple of opportunities this week to get a live signal from Brazil and look at that on the screen here at Vue. We were having some challenges synchronising the audio to the video, just timing issues, not so much drop out issues.”

There was an uplink (via Eutelsat) from Brazil to Paris, and a further uplink to London, “quite a long signal chain, going through a lot of different equipment, so there were some issues synchronising the audio, but we got there in the end, and we’re really happy with what we’ve been seeing so far.”

Speaking to SVG Europe at the quarter final, he said: “It’s the second full production we’ve done.” The first match wasn’t transmitted to any public sites, but Sony did have some engineers watching the results at Vue. During the week, it also had a few test signals to examine.

It was a multipoint delivery, with the signals also going to a couple of test sites for Eutelsat and DSAT Cinema (which did systems integration, including network and receiver configuration) to look at. IDC provided the 4K/UHD HEVC decoder and professional satellite receiver installed in the cinema.

When they discussed this initially, four months ago, with Eutelsat, DSAT and IDC, they felt that HEVC transmission was not only achievable, but “would make the project worthwhile in terms of being another milestone reached.” However, the use of HEVC “wasn’t without some risks, as we’re still using prototype technology. IDC did a fabulous job in getting that technology to a maturity that made us feel confident that we could use it for today,” said Bush.

As the transmission was “more of a technical and marketing test exercise” than a commercial production, “it really was about testing just what we can do.” The useful bit rate received from Maracana was at 83Mbps.

When you watch something on the big screen, you expect a wider picture than the 16:9 of UHD offers. What looked great on the 95-inch displays in the lobby seemed too high in the cinema. However, the results were still impressive.

Although Bush said that the production team is still learning what can be done with 4K, the most obvious benefit were the wide shots, showing most of the pitch, which allowed you to see the patterns of play without missing any detail. Indeed, in the Germany-France match, the first ten minutes or so was almost entirely made up of wide shots. As the pace of the action increased, the shots got closer, but even then were generally long shots. Indeed, with the increased resolution and big screen, a mid shot was probably as close as you would want to get. 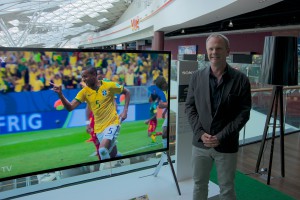 Bush watches a lot of live football, as a Premiership club season ticket holder, and believes that the higher resolution allows the director or cameraman “to shoot slightly wider, and that gives you a more tactical view of what is happening in the field of play. It really is more like being at a live match where I will be looking at not just where the ball is, but the movement of players off the ball and the tactical set up. As a sports fan, that’s the thing I’ve noticed most today.

“Of course, there are some fabulous close up shots as well, where there is a lot of detail in the shot, and just from an aesthetic point of view they look beautiful.”

Also noticeable were the improved dynamic range and colour reproduction, deeper blacks and brighter whites. The match was shot at 60p, which Bush thinks is particularly important for sports, for reducing the motion blur. The match wasn’t standards converted, and was projected at 60p.

“It’s another milestone in proving what can be done with 4K, in this case for cinema, but obviously there are a lot of broadcasters very interested in what we’re doing,” some of whom (such as the BBC) have taken a signal for their own 4K testing.

“We think there is a really strong momentum behind 4K, and more and more people are getting the opportunity to see it,” which he believes is resulting in growing demand.

“The adoption of a technology is always about a number of breakthroughs,” of which this test was one not only in live satellite delivery, but also in production. “It is the largest scale 4K production we’ve done to date, as a live delivery,” he said.

On Vue in London

For the final, Vue is making pairs of tickets available for free, via its website. “We’ve worked really closely with Vue for a few years now,” said Bush. “All of its UK sites are installed with our 4K projectors. It’s a really deep partnership,” not just as a supplier “but working with them on developing new types of business opportunity, particularly in the area of event cinema,” which included the production and delivery of the play War Horse in 4K recently.

This will not only include sporting events, as they intend to experiment with wide range of other content, “to test the audience appetite, to test the experience. Some things will work better than others, so it is about testing out a lot of different experiences,” and Vue hopes to attract new types of audiences.

For sports, Bush hopes such cinema events can build on the success of the fan fests seen at the World Cup and elsewhere. “Sports viewing is a very social activity in its nature, and bringing that in a very high quality into a cinema does tick some of those boxes. Even today, with a closed, invited audience, you feel the engagement from a lot of the people in the theatre.”

As the final is a public event, it will be a more representative audience, so they hope to learn even more from that.