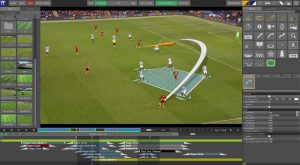 After the successful release of Tactic Advanced earlier in 2019, RT Software has followed up with the release of Tactic Pro, aimed very much at the top end of studio show and live sports analysis. Incorporating all the ‘ease-of-use’ functionality of Tactic Advanced, Tactic Pro introduces additional features such as Multicam support, Camera Morph, Line Tracking, and Timeline based editing.

With Multicam allowing users to add graphics to a clip of sporting action from multiple camera angles simultaneously, and Timeline giving much more precise control and editing of complex analysis sequences, Tactic Pro is already a step up from Tactic Advanced. Visitors to the RT Software booth at IBC 2019 will also be able to see demonstrations of the next release with Camera Morph, which allows the user to create a seamless virtual move from one camera to another. Line Tracking provides consistent and accurate, multi-point tracking references, allowing graphics to stay in position on the playing surface even as the camera moves, as well as enabling accurate metrics such as distance between points or speed of player movement. Current users of Tactic Pro will be able to upgrade to the new features free of charge.

Both versions of Tactic are designed for full broadcast workflows, either clip-based or with control of
external replay servers, while also providing the presenter with the option of presenter control via touch screens or handheld devices. Tactic allows any broadcaster to enhance their highlight packages, post- or pre-match segments and even live events.

Mike Fredriksen, Commercial Director at RT Software, said: “We believe from our many years of experience working with sports broadcasters that we have the easiest-to-use and most cost effective telestration systems on the market. Tactic Pro is a huge step forward for our customers by providing them with easy-to-use top-end functionality and features that would only previously be available on the most expensive and complex systems.”

The next step for RT Software is Tactic Lite, a version aimed at lower budget sports production. Mike Fredriksen added: “Tactic Lite development is already underway and will introduce high-quality telestration features to a market where such features were previously unattainable. The Tactic family is taking shape in a way that means anyone looking for a telestration solution need look no further than RT Software, regardless of their requirement or budget.”