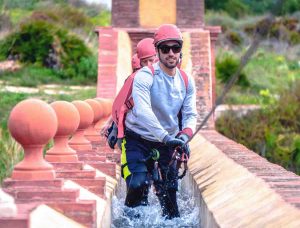 Filming the second series of THRU in Andalusia, Spain

Insight TV has announced the launch date and new production details for the second series of its reality show, THRU. The 8 x 44-minute series, which sees two teams of nine brave competitors trek through highly challenging terrain following a straight line from point-A-to-point-B, will air on Insight TV and Insight.TV from 11 December.

Following the Blue Team’s series one victory in Greece, which saw Daniel and Ionut win more than 20,000 euros in prize money, this year’s challenge takes place in Spain, in the southern region of Andalusia. Two teams of contestants from all corners of the world including the US, India, Germany, Netherlands, UK and South Korea are all set for their adventure, which sees them travel over, under or through all ‘natural’ obstacles. The teams must not deviate from the predetermined route, whether that means they’re travelling through a river, a castle, a mountain or a swamp, for instance. The routes will also pass through several private properties (houses and companies), which means the teams will have to use their best negotiation skills so the locals will provide the permission required to continue.

The show features several fitness influencers including Hugh Sunhong from Seoul, Ben Mudge from Belfast, and Lienke de Jong from Amsterdam. It’s hosted by Brendan Moar, who takes teams to surprising locations to begin their new THRU battles. In every episode the teams compete along a straight track that is only 10 metres wide while carrying backpacks, which each contain their share of the team’s cash: a total of 50,000 euros. During the race tension rises when the teams discover that not only must they eliminate their team members, but they also have to face some big suprises that Moar has in store. The winner is determined by which team makes the least mistakes along the track.

“We’re really excited to see the reaction to the new series of THRU, which will kick off the festive season with a bang,” said Arun Maljaars, director content & channels at Insight TV. “This series will be bigger and better with more prize money and a lot more surprises that even the fittest influencers will find challenging. The mental and physical tension that the series brings will guarantee a breathtaking and gripping finale in Malaga. It’s definitely one you don’t want to miss!”