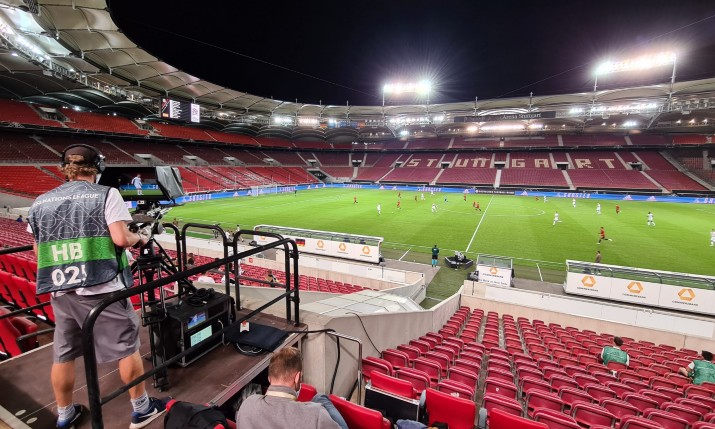 After the successful premiere at the German Cup Final in Berlin in early July, the RH2W remote head built by Berlin-based Blackcam System was repeatedly used at the UEFA Nations League match between Germany and Spain at the Mercedes-Benz-Arena in Stuttgart, Germany on 23 September.

The RH2W was located directly between the coach benches at the centerline and was used for both the live editing and the super slow-motion sequences. The newest feature the RH2W’s ability to carry system cameras with box lenses while delivering smooth pictures with ultra-long focal length.

The use of the Blackcam Remote Head was co-initiated by the OB company TVN Mobile Production who were providing production services as part of the host broadcast operation.

Since the return of the German Bundesliga after the COVID-19 lockdown this key camera position had been permitted due to the new, stringent hygienic requirements. The RH2W remote head brought one of the key camera angles for sport broadcast back to life, and it again delivered most emotional pictures of the game in Stuttgart.

Steady to the highest focal length, the Blackcam RH2W was used with a Sony HDC-4800 camera and a UHD Digisuper 122x 4k Canon lens with zero latency remote control and super slo-mo included. The RH2W’s large dynamic range is suitable for any type of sport broadcast. The company says sensitive camera moves with full focal length of 1000mm (122x) are possible without shakes and easy to handle for any camera operator and fast panning movements are also easily executed.

The overall dynamic range is completely displayed in the system’s control and does not require an extra adjustment of the speed range compared to other remote systems. The camera operator is able to keep both hands on the remote arms to operate it easily as experienced camera operators do not need to get accustomed to the new technology because the standard handling allows precise and dynamic camera work.