UK satellite uplink, television and radio transmission and new media service provider Arqiva has put the assets of its outside broadcast division up for sale. The OB fleet has worked in recent years on a variety of TV sport productions, including coverage of the Football League and bowls, but Arqiva has decided to sell after a general review of its business.
Known at one time as Scanners, Arqiva OBs operated a fleet including four HD trucks that worked on a range of TV productions, from sport to light entertainment to current affairs. While the OB arm was initially seen as complementing Arqiva’s uplinking and SNG operations, recently it has appeared to be less of a priority for the company.
In July Arqiva bought UK WiFi hotspot provider Spectrum Interactive and has formed a joint venture with BT, BAE Systems Detica and Sensus to operate a network of “smart meters” for domestic electricity suppliers. Steve Holebrook, managing director of Arqiva’s Broadcast & Media division, says this shows that corporately the company is “constantly evolving as a business into new areas of growth whilst at the same time efficiently determining which aspects of our current portfolio are growth limited.” 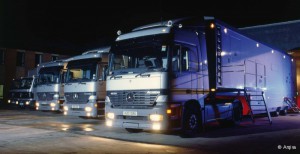 Arqiva hopes to sell its OB fleet by September.

The implication is that OBs is considered “growth limited”, despite Arqiva’s activities in distributing films and live events to digital cinemas. Recent activity in this field included using Arqiva’s Digital Cinema Satellite Distribution System, which involves its SNG uplinks, to relay 3D coverage of Wimbledon.
Commenting on the decision to sell Arqiva OBs, Holebrook says, “It is prudent for us to regularly review existing markets whilst at the same time explore new business opportunities. As part of our wider business review we have identified that Arqiva’s Outside Broadcast business has insufficient scale to compete in a market that is dominated by a couple of large OB players. We have therefore taken a decision to seek a buyer for the business who bring scale benefits through integration with their wider business.”
Holebrook described the decision to sell the OB business as “difficult” and added that Arqiva was looking for a buyer and would “begin a collective consultation programme with those staff who are affected”.
SVG Europe understands Arqiva is hoping to complete the sale, which involves only the trucks, by September and that the major UK OB groups have been approached. At this stage they are bound by a non-disclosure agreement (NDA) and cannot speak openly about the matter.
Industry sources, however, feel the Arqiva fleet was in need of new investment to bring it in line with changes in technology, such as 3G. Whether this makes for an attractive sale remains to be seen.