Live from Roland Garros: UHD HDR production on tap for end of tournament

France Télévisions is once again working closely with the Fédération Française de Tennis (FFT) to make sure that rights holders for the French Open around the world have a chance to deliver the more matches and coverage of the event than ever. And during the final four days of the tournament Roland Garros will be the latest event to experiment with UHD production in HDR and SDR. 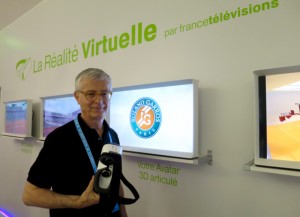 Bernard Fontaine of France Télévisions says the HDR/SDR tests will find out how much average viewers notice the difference between the two formats.

Bernard Fontaine, France Télévisions, director of innovation, says that a 4K production (four Sony cameras operating in SDR mode, four Sony cameras operating in HDR mode, and three additional HD cameras upconverted to 4K will be used during the semi-finals and finals. The 4K production will be produced in a Euromedia truck with an Ateme encoder handling the encoding of the signal using Hybrid-Log-Gamma standard so that a single signal can be delivered to both HDR and SDR sets. Eutelsat will handle satellite distribution.

As for the traditional HD production, France Télévisions is handling the production of the seven TV courts (plus its own domestic feed) while FFT is producing nine additional courts with the use of Sony’s Hawkeye production system. 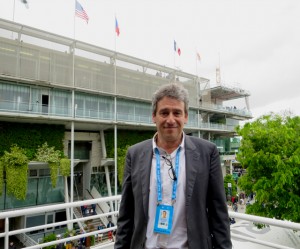 “We have five of our trucks here with seven control rooms handling the international feeds and one truck for the domestic program,” explains Nicolas Kirszenzaft, production manager, Francetv Sport. The two largest trucks have two control rooms in each while the three smaller trucks have one control room in each. There are also three Avid editing systems tied to a Unity server for editing needs.

“The challenge is the start, 11 a.m. on the first day, as we need to get seven international feeds up,” says Kirszenzaft. “Then the domestic program begins around 3 p.m. everyday while the Sunday [domestic] show is big.”

More than 600 people are on site for the production, not so much because of the scale of the production but the French labor laws that limit workers to 35 hours per week. As a result there are two people staffed for each position, a move that keeps the staff fresh, something that is often not the case at a tennis major complete (like the past two days here) with weather delays.