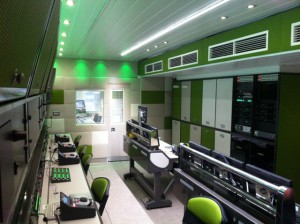 NEP Vision’s latest OB unit, Atlantic, hit the streets earlier this month and the triple-expando unit is giving BSkyB football productions a massive new home that is not only 1080/50p capable but also measures approximately 900 sq. ft. when in full production mode. “Atlantic combines the design ideas of our Gemini truck but condensed into one truck,” says Brian Clark, NEP Visions, Commercial and Technical Projects Director. “We were tasked with coming up with a new design that pushes the concepts of ‘Mobile Unit Design’ into a new era.”

At the core of the production area is a Grass Valley Kayenne vision mixer, a Calrec Apollo audio desk, Vizrt graphics gear, an Evertz EQX Magnum router, and 12 eight-channel EVS XT3 replay servers with a fully tapeless capture and transfer infrastructure. Samsung flat screen monitors and Evertz multiviewers also play a key part as the truck can handle up to 30 Grass Valley LDK 8000 cameras outfitted with a variety of Canon lenses.

“One of the things we wanted to do was give it a different feel so it was more like a studio instead of being in a truck,” says Clark. Windows within the truck allow for those in the main production area to have visual contact with the audio and videotape areas. And there is also a larger vision area. 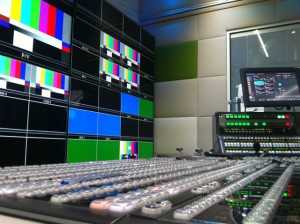 A Grass Valley Kayenne vision mixer is at the center of Atlantic operations.

“The vision area is usually cramped but the area in Atlantic is bright and light,” adds Clark. “And the finish on the walls in the unit are like leather panels instead of carpeting. Those panels help with the acoustics and create a very nice working environment in a powerful truck.”

From an engineering standpoint the truck is 1080/50p or 60p from end to end, a first for Visions and the UK market. And while 1080/50p has yet to hit consumer homes Clark and Visions believe it is important to understand how 1080/50p works in a real-world implementation.

“We want to be seen at the front end of technology change and push Broadcasting forward to see how this standard works,” he explains. “How do all the parts of the chain work together?”

But for clients like BSkyB the near term enjoyment of working in the Atlantic is the room, space, and being in a massive unit that can expand and within minutes be ready to go.

“It’s a very intuitive and creative work space where they can walk into the production gallery and see people, react to them, and talk to them,” adds Clark. “This is just one of the key design features but this one point then helped focus the other aspects of this trucks operation .”