The deployment of its newly launched instant replay system, Simple R, during the Bulgaria/Denmark World Cup qualifier last month was undoubtedly a recent highpoint for multi-channel recording, slow motion, instant replay and sports refereeing solutions provider Slomo.tv. But viewed in context, it was merely the latest stage of progress for a company whose profile has grown steadily since it was established in 2007. 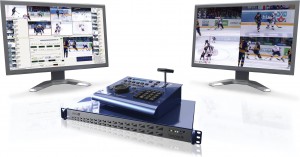 Sandro Glanzer, Slomo.tv European and ME product manager, readily allows that “Simple R is now on everyone’s lips”, but insists that there is much more to the company’s current offer than this compact 3-in, 2-out instant replay server.

“We provide customised solutions at affordable prices for practically all tapeless recording applications,” he remarks. “Our major product lines with up to 16 channels of HD include DMR technology – a unique process of simultaneously recording to internal RAID storage and direct into NLE native files to external media. Our servers can be networked together, while we are also very proud to have the only Windows-based broadcasting systems licensed for Apple ProRes codecs.”

And, all the time, the sports-oriented range continues to grow. By way of illustration, Glanzer alludes to videoReferee, an 11 HD channel server for video adjudication, which captures official data from the scoreboard controller and creates a DVD of game highlights. “The system is already very successful in Russia and [has been] installed at almost all major sports arenas,” he says.

2013, meanwhile, looks set to be a year of significant new product launches. A combination of mixer, multi-viewer and editing tool, MIXpace aims to “dramatically” reduce space requirements and weight in OB vans; multiple MIXpace devices will be able to access the same video sources simultaneously. Also on the way is the compact, ‘entry-level’ Brick, which provides four recording channels (HD/SD on SSD) and two-channel playback with transitions in a 2U, 9.5” wide form factor.

Riding high on a summer that saw Simple R receive the ‘What Caught My Eye’ treatment during IBC and the confirmation of a distribution agreement with Broadcast Solutions GmbH, Glanzer reveals that among Slomo.tv’s overriding European objective for next year is the development of an extensive dealer network. ‘Net pricing’ for all end-customers, he notes, will be fundamental to the company’s approach.

“We think this policy is the only way to deal with the problem of decreasing dealer margins and unfair competition. It is good for everyone: the dealer, who can concentrate on providing better service; and the customer, who can purchase a product [without being in doubt that they are] getting a fair dealer. We are looking for the most appropriate dealers and, in time, will be ready to offer exclusive territorial contracts. This process has only just started, [and the] requests of qualified resellers are still welcome.”

As might be expected, a comprehensive exhibition presence will be part and parcel of this drive for growth. “We will be at the CABSAT, NAB, Broadcast Asia and IBC shows, and are in negotiations with several established companies regarding cross-selling and bundling,” confirms Glanzer.