Sky Sports is once again on hand at the U.S. Open golf championship, this year being played at Erin Hills in Wisconsin, but its operations have been improved thanks to the U.S. Open debut of the Open Zone, and two new innovations from Telegenic: a new cart-based touchscreen display and an upgraded infrastructure for the T-Wiz OB van which plays a central role in Sky’s 34 weeks of golf coverage in the U.S. And NEP is once again at the center of the action with its Chromium production unit handling the production of Sky Sports coverage that makes use of various camera and audio signals from the Fox Sports production. 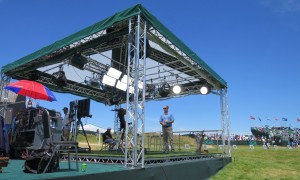 The Open Zone is a small open sided studio located next to the practice range that includes three positions for the weekend: a seated interview position with the range as a backdrop; a practice area with shot tracking where golfers and commentator Butch Harmon can demonstrate shots; and an area for the touchscreen system to be used for analysis. The Open Zone made its debut at last year’s Open Championship at Royal Troon and was used stateside at the Players Championship at TPC Sawgrass last month.

“It’s a good innovation and a lot more engaging than just being in a studio as you can see Butch play rather than just sit in a chair,” says James Clement, Sky Sports, head of operations. 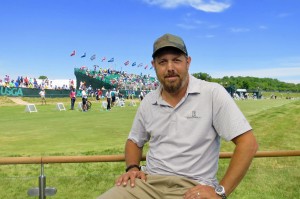 Travis Schwarz, lighting director for U.S.-based Sky Sports productions, says the Open Zone is the site of Sky’s 30-minute opening show, closing show, and then about five or six inserts with one or two demos during the day. The studio has a translucent roof to allow for more natural light to enter the tent and he says there is loads of flexibility to move around and change things up.

“It was built with three sets by design,” he says. “Sky Sports has always been big on innovation and everyone else follows behind.” 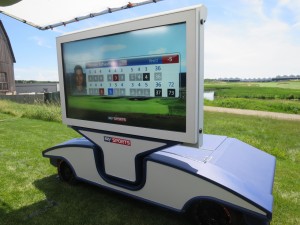 Sky Sports has a new Sky Cart for its U.S.-based event coverage.

Clement says the new cart with touchscreen was created with the input from talent and staffers. Telegenic was then tasked with turning that vision into reality and the results is a cart that has 72-inch screen with 5,000 nits of brightness that can roll around to various standup interview positions and has hydraulic jacks for improved stability and a screen that can retract to the center of the cart to provide additional stability when in motion.

“The center of mass is as low as possible,” says Clement. “We tried to build something that works for everyone and it flipped from being an R&D piece to something that is business as usual.”

The new system is only in the U.S. as the Sky Sports team back in the UK is in a better position to handle maintenance on the current system.

The bigger news from Telegenic is the revamped infrastructure for the T-Wiz remote production trailer. T-Wiz debuted last year and includes a control room area that can cut a complete show for lower-level events (at the U.S. Open it is handling graphics duty), a comfortable green room for talent, and comfortable commentary positions that replace traditional office trailers. The new technical infrastructure is based around a Riedel Mediornet 10 Gbps decentralized routing infrastructure, multiviewer, and a Lawo VSM control system and the combination gives the truck much improved flexibility and firepower.

“The biggest improvement is the Mediornet decentralized router as now the Sky Cart, Open Zone, T-Wiz, and Chromium are all part of the same router and any signal is available to anything,” says Simon Foster, Telegenic, deputy head of audio. “The support we received form Riedel was fantastic as they helped us set up and commission it. This is the right router for the right job and decentralized routers, I think, are the way forward.” 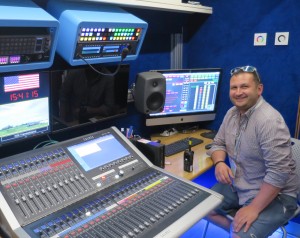 Simon Foster of Telegenic inside the T-Wiz audio area.

Audio also took a big step forward with a move to a DANTE network as the single network handles all the wireless IFB and commentary systems. The DANTE network is also set to DHCP so that it automatically assigns IP addresses to devices like radio mics. That means that people in the field don’t need to worry about tracking down IP addresses.

“And with the push of a button we can get the commentary position set up in 57 seconds,” says Foster.

The Lawo VSM control system also greatly improves operations as it gives Foster complete control over all devices on the network and control panels can be personalized and quickly reset for a new user.

“People can build the router panels the way they want and that makes it simpler for people that might not be familiar with running extremely complex networks,” says Foster. “I can also run the Sennheiser mics via remote control software so I can scan the available spectrum and set a mic to open spectrum from here which is great,” he adds.

“With two fibers we can connect the Brio to the Calrec Apollo console in Chromium and share resources with each other,” says Foster. “And because it is on the Mediornet network it once again has every audio source anywhere on the network available.”

And one of the new favorites? The Cedar DNS8 eight-channel noise reduction system.

“It has an automatic learn function so you can open the mic to plus-10, hit learn, and then it gets rid of wind or generator noise,” says Foster. “Then you just adjust the thresholds. But it is our favorite piece of gear to get rid of generator noise. There are generators right next to the T-Wiz commentary positions and you can’t hear them.”