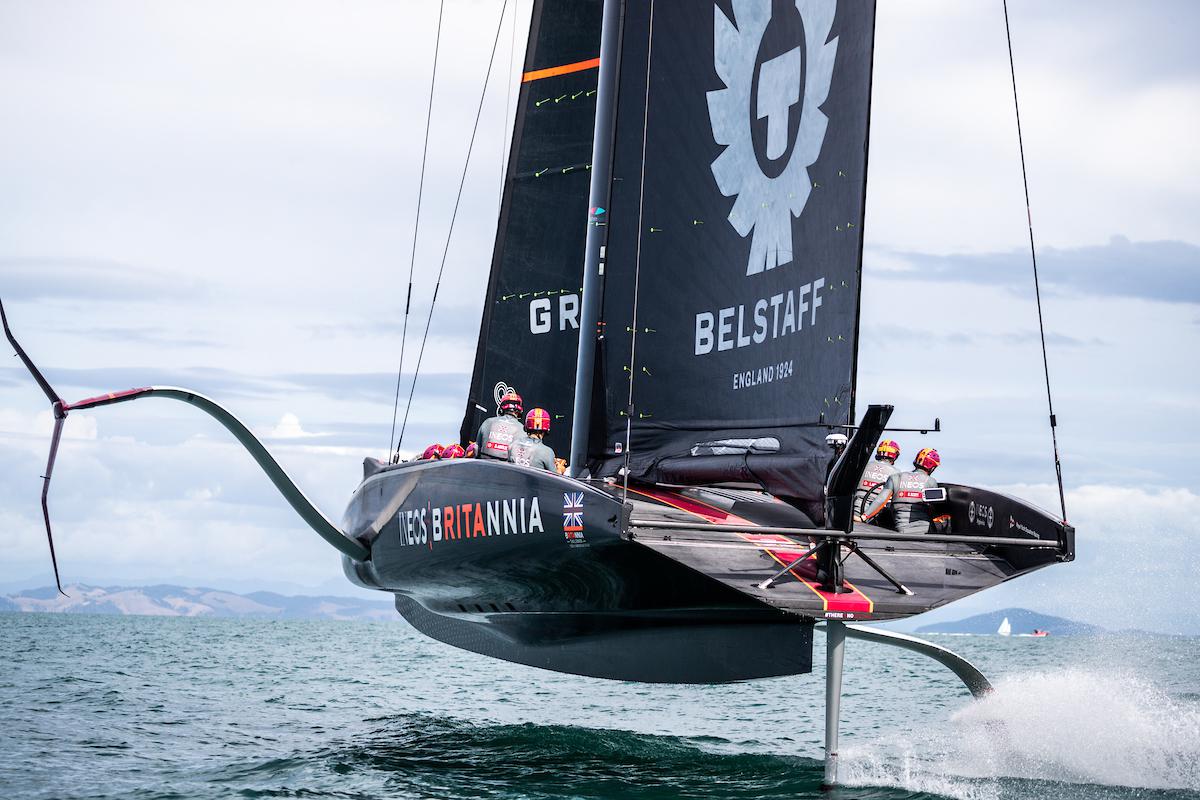 A media pole on the stern of the America’s Cup yachts will transmit video, audio and data to the production team on the shore

The 36th America’s Cup Finals begin on 6 March but the battle to see who will face off against New Zealand in them began this weekend (15-17 January) with the first Prada Cup Round Robin race in New Zealand’s Hauraki Gulf.

For the America’s Cup production team, the race begins a new era of technology innovation, new partnerships and a production with a nice Kiwi feel. At the heart of the production is a new regatta-management system.

The system was built by Igtimi, a sailing-research-development company in Dunedin, NZ, and Riedel (which with WEST4MEDIA formed a joint venture named Circle-O that is the host-broadcast-organising entity).

The system and other new developments will give producer Leon Safton, director Wayne Leonard and a crew of 75 – half of them from New Zealand – some new tools for creating new looks.

“We have lots of people with lots of experience with the America’s Cup,” says Nuttall. “Then we mixed it up with some innovations and people who are new to the Cup.”

One of those new companies is Riedel, which will handle the operation of all the on-board cameras, communications systems via Bolero and broadband microphones.

“They’ve built the mesh network that goes over the harbour and enables us connectivity with the boats and back to the broadcast centre,” says Nuttall.

“The camera boat bounces around like crazy, and the camera operator can sit there and focus half a mile away and clearly see the faces on the boat. It’s amazing.”

The new regatta system improves the America’s Cup production in a number of ways. First, it will allow the racing craft to be tracked within 2cm, allowing a virtual diamond to be drawn around the yacht to make it easier for the equivalent of a video referee to determine infractions and penalties.

“We can track how fast they are moving, how high they are above the water, how much they are tipped forwards and back,” Nuttall explains. “It’s going to be a core part of the broadcast.”

The system also allows safety personnel to ensure that spectator craft are where they are supposed to be, the course location is correct and more.

The boats are the stars of the show, and the yachts this year are arguably the fastest ever for an America’s Cup. Known as the AC75 (or America’s Cup 75) the 25-meter sailing hydrofoil monohull yachts have a mast that is eight stories tall. They can hit speeds of up to 50 knots (or about 120kph). Says Nuttall, boats that large moving that fast are a sight to behold.

“Each AC75 has 10 cameras,” he explains, “one on the bowsprit, one on a media post on the stern used for yacht feeds, two cameras on either side of the mast and the rest in the areas where the crews are. Three of them are agile and the others are PTZ cameras. We also have two helicopters and the plan is for a drone later, and then we have the camera boat. Body-worn cameras will be added later in the Prada Cup.”

It is very much a New Zealand affair when it comes to some of the key technologies. Animation Research Ltd (or ARL, as it is more commonly known for its work in augmented reality (AR) graphics) will be at the centre of the AR graphics.

“ARL has an entirely new system for the graphics,” says Nuttall. “In the past, it would draw the borders using sensors on the water. Now it is using image processing and AI to work out the borders and markers and draw the graphics accordingly. They don’t need data and don’t even need to be onsite, but they are: with a crew of only 75, it makes sense to have everyone here.”

As for the new look, Nuttall says it was time for a refresh. Liveline technology had been around for a while and ARL has a long-standing relationship with the Cup and had some new ideas on how to derive graphics based on some of the work the company has been doing in different sports.

“The data platform is new,” Nuttall adds. “Normally, those would be done in separate silos, which made it a bit complicated, disconnected and therefore not as good. So putting it into one system is a good thing.” 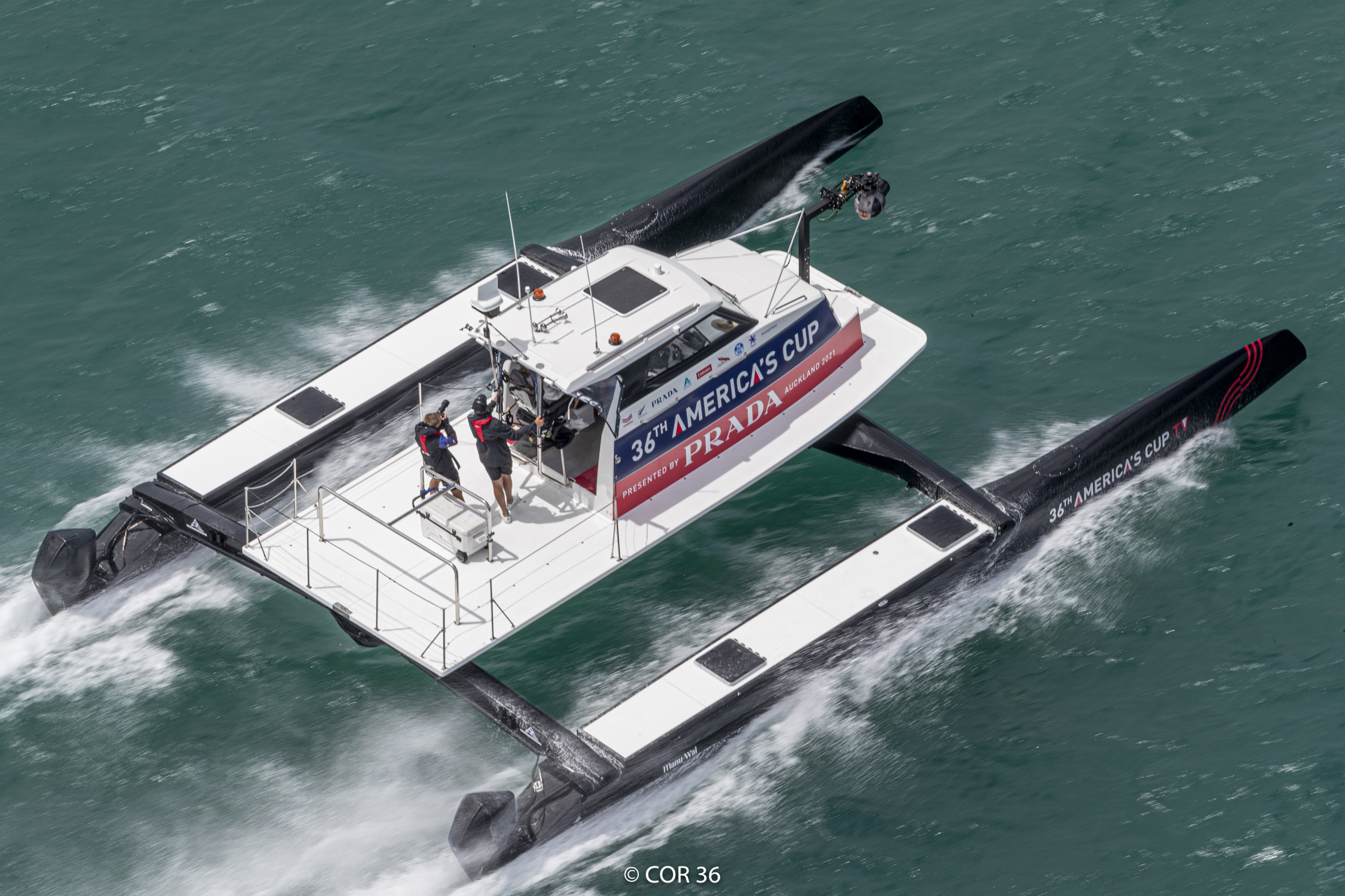 Coverage from sea and air

Queenstown-based Shotover Systems provides a gyro-stabilised camera system, which is located on the camera boat. The boat, which is made out of a recycled AC45 yacht, can reach speeds of 38 knots and is the fastest camera boat in the world. London-based Amis Productions will handle the aerial and camera-boat filming.

“It’s really impressive,” says Nuttall. “The camera boat bounces around like crazy and the camera operator can sit there and focus half a mile away and clearly see the faces on the boat. It’s amazing.”

On the audio side, the production will have broadband microphones from Sennheiser and systems from Riedel on the boats for signal management, allowing viewers to hear what crew members are saying to each other.

“We will get some good-quality audio off the boats, and then the trick is to tell the stories of the races and not get overwhelmed with the details,” says Nuttall. “We have enough details to keep dedicated fans happy with the coverage and then the world feed for the general audiences.”

Racing is scheduled this weekend and for the next three weekends to eliminate one team from the Challenger’s Selection Series. The top two challengers will race against each other for the Prada Cup and the chance to take on the Kiwis in the America’s Cup Final beginning 6 March for a best-of-13 races.

“We will be adding new features like more biometrics, the body-worn cameras will come, and we will use the drone more,” says Nuttall. “We are holding back some things for the latter part of the event when the audience is at its largest.”

“We try to warm the story as much as possible to engage as large an audience as we can. We also use digital and social to tell those stories more calmly.”

European Broadcasting Union Members also have access to live, long-form and short-form highlights via the Eurovision News Exchange. Top rights holders around the globe include the BBC and Sky UK in the UK; Canal+ in France, Switzerland and French territories; TVNZ in New Zealand; TV12 and C More in Sweden; Servus TV in Germany, Austria and Switzerland; NBC Sports in the US; TSN in Canada; ESPN in Latin America and the Caribbean; and DAZN in Japan.

“We are looking to break records for viewing with public broadcasters supplemented with major pay channels like Sky in Italy and the UK and Fox in Australia,” says Nuttall. “We kept the digital rights by and large with live streaming at Americascup.com, YouTube and Facebook almost everywhere in the world. It’s important to make the coverage open and accessible to all.”

The streaming coverage has three channels that will appeal mainly to sailing fans, he adds. “We have a data channel where they can consume all the data they want and then an onboard channel so you can sit on the back of the boat and see an entire race.”

The world feed, says Nuttall, will be packed with the live race coverage as well as lots of features about the tech, the people and the teams.

“We try to warm the story as much as possible to engage as large an audience as we can. We also use digital and social to tell those stories more calmly.”