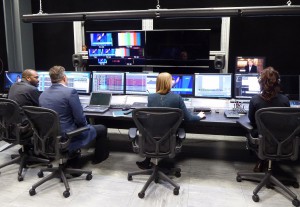 The master control room at TBN UK in London..

Prominent systems integrator ATG Danmon has announced the completion of a second major project for the church and London studios of Trinity Broadcasting Network (TBN).

“Trinity Broadcasting Network was established in the USA in 1973 and is now the world’s largest Christian television network,” comments TBN UK and Europe’s managing director, Richard Fleming. “We have been broadcasting in the UK and Europe since 1999, mainly by satellite, with a reach that was subsequently extended to the Middle East and parts of Africa and Asia.

“This latest project is essentially phase 2 in a series that began last year when ATG Danmon integrated an ingest and playout system which extended our reach to the UK digital terrestrial television network. That service went live on Freeview in January. Phase 2 involves the addition of two extra channels which will be transmitted to other geographic regions.

“The Freeview feed currently transmits in standard definition but the entire playout chain is wired for HD. This gives us the ability to introduce a fully 1080-line service if or when HD delivery channels become available.”

“Playout of the new channels is supervised from a Custom Consoles Module-R desk which we integrated during phase 1,” adds ATG Danmon project engineer Jon Brewer. “We have modified the desk itself and expanded the capabilities of the Pebble Beach Marina automation system to accommodate the extra channels.

“We have also incorporated an Axon TRACS compliance recorder which can store up to 30 days of digital video and audio. A Dalet AmberFin transcoder has been installed together with Vidchecker quality control software. Additional facilities include expanded EditShare storage, Trilogy sync pulse and video test generators, Imagine distribution amplifiers and supporting infrastructure. Playout can be performed live, near-live or from fully automated servers.

“The entire project was completed successfully and on schedule.”