Behind the Scenes of the NFTS Sports Production Diploma: Part III – Practical Coursework 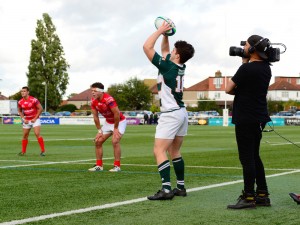 In the third and final part of the series focusing on the NFTS’ Sports Production diploma, SVG Europe and Blackmagic Design find out more about the practical elements of the course in the company of current student Mac Leesburg, who tells us about a recent OB assignment.

“As many of us don’t have technical backgrounds before starting the course, the practical tasks increase in complexity as we progress,” he says. “So having produced some original feature pieces, we were tasked with putting together a full OB to cover a rugby match taking place at the Ealing Trailfinders Club on a sunny Autumn afternoon.

“We collaborated with students from NFTS’ Camera, Sound and Vision Mixing course to plan out the OB for the day. We all had a say in the day’s planning, but as a general split, the broadcast production team looked after the live OB workflow, and we focused on making sure that it would all match what we wanted to produce from an editorial standpoint. An essential part of this was the camera plan, and we were really strong in this, with a good narrative, which translated into excellent coverage for a small scale OB.

“My role on the day was as the producer, overseeing the directing, leading the running orders and feeding instructions to the floor manager and commentators – a lot to look after!

“There were a lot of unexpected issues that we had to cope with during the OB. It was a very different experience to our classroom discussions. When you’re in the thick of it, you have to be decisive and make sure the broadcast keeps running smoothly.

“The Blackmagic OB system came into its own during our coverage of the match. Not all of the students were familiar with the rules, pace and subtleties of rugby, and so it made a big difference having intuitive production hardware. Personally, I joined the course with no camera experience, so the URSA Mini [4K] has been my first professional level camera. I found it intuitive to use, especially the 4.0 UI. It is functional but thorough. As my knowledge and understanding of cameras has grown this year I’ve been able to achieve more with them.

“The best part of the OB assignment was seeing how much everyone had improved from our initial run through a month before, and it was evident from the final programme content that everyone had put everything they could into making the production the best we could. This was a big step up in professionalism for us, and one of our most significant learning experiences on the course so far.”