“Many of our teams have their own apps and they want to develop their own content,” says Leander Monbaliu, Belgian Pro League chief business officer. 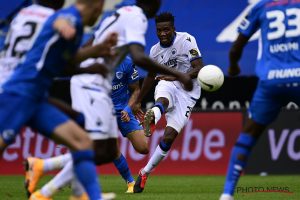 Highlights of players like David Okereke of Club Brugge the Jupiler Pro League are easier than ever for the Belgian Pro League to create thanks to WSC Sports.

The new relationship gives all the clubs, big and small, a chance to take their content creation efforts to a new level. Monbaliu says clubs are also realising new revenue streams that are helping the tool pay for itself. It also is providing more content to 433, football’s most powerful digital and social media agency.

“There is a difference in maturity for the clubs as some have their own media house and then others have smaller ambitions,” he says. “We want to help those that are less accomplished and those that are bigger both rise up.”

Teams have access to a basic version of the WSC Sports system where they access highlight clips that are cut by the league as well as a premium version that opens up more capabilities. The league also carved out rights for the clubs so they can show goals in their match centre during a game.

“What’s most important is to be a service provider for the clubs and league so we can develop digital platforms,” says Monbaliu. “The usage of clips from the clubs is already a lot bigger than it was before because the footage is ready-made and available. We have a new Web site and social media channels and we can automate a lot of the content that goes onto our site.”

Monbaliu says WSC is a key part of a triangle of stakeholders that also includes STATS Perform, the clubs, and broadcasters. With a dedicated channel from Eleven Sports the ability to automatically cut video clips and couple it with stats and metadata from STATS Perform makes it easier to innovate and grow the Belgian Pro League.

“Near-live goals weren’t available to the clubs and now they have that as well as 120 seconds of game footage that they can use after the game,” says Monbaliu. “It allows the clubs to be more present between the games.”

The automation also extends to languages with clips available in French, Dutch, and English.

“English wasn’t available before,” says Monbaliu of the new feature that will help the league gain traction internationally. “There are a lot of famous Belgian players and if the clubs are more present internationally it benefits our broadcasters.”

All the changes are part of a season that began by actually finishing off the final games of last season, including the Cup Final as well as the games to determine what teams make the leap from League 2 to League 1.

“This year we had two clubs join League 1 from the second league and the club that normally would be relegated wasn’t relegated,” says Monbaliu. “We have 18 clubs in the first division instead of 16.”

WSC Sports also is now part of Pro League Forward, a technology platform and hub that the league launched to bring together its various technology partners like those involved with ticketing, CRM, and data.

“We want to bring those companies together and see where we can find new innovative solutions that can benefit the clubs,” says Monbaliu. “WSC Sports has already spoken with different partners and it’s exciting.”