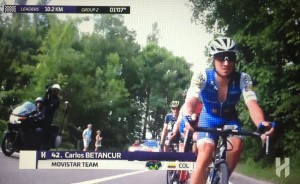 Broadcast RF, in conjunction with EuroLinX, has been breaking boundaries once again by supplying live onboard camera pictures from competition bikes at the recent Velon Hammer Series road cycling event.

HBS, the producers of this show, wanted to give the viewers of this new exciting cycling series an element of what they have seen in a velodrome. Sanctioned by the teams and Velon, Broadcast RF produced a small saddle mounted live HD RF camera system, the “VeloVue Road”.

“Our VeloVue Track, is a live on-board camera designed for Track Cycling, has been a massive success at the world’s leading UCI Track Cycling events.  We started in Paris in 2015, and recently had remarkable success at the World Championships in Hong Kong.  The VeloVue Road is the next step for us in the challenging outdoor Road Cycling environment.  The difficulty is the scale of Road Cycling and the terrain of the courses.  We didn’t want to rush the design, as it’s a compromise between pleasing the riders with the design, and ensuring the RF camera actually works,” said Broadcast RFs Commercial Director, Chris Brandrick.

Julien Bertin, HBS Executive Producer said: “HBS challenged Broadcast RF to build the first ever live onboard camera for the UCI World Track Cycling Championships in 2015. History was made, and they done it. By teaming Broadcast RF up with the cycling expertise of EuroLinX was a no brainer for me by bringing the best in RF technology together to give us and Velon the best results for our new venture, the Hammer Series.”

Graham Barlett, CEO of Velon, wanted to express his happiness with the onboard pictures and stated: “This has been a dream of ours for a while now. Whilst we understand this is a challenging task on the circuits of Road Racing, Broadcast RF and EuroLinX brought our creative ideas to reality for our new event, the Hammer Series.”

The VeloVue Road is an adaptation of the VeloVue Track, allowing transmission directly up to the pressurised RF relay plane supplied and engineered by EuroLinX.  This allows complete freedom for production and give fantastic results wherever the bike is on the circuit, without the requirement for “relay” RF motorbikes, as previously used.

Bruno Coudyzer, EuroLinX Manager, states: “As a specialist in wireless provision for Road Cycling events worldwide, the VeloVue Road added a huge amount of value to the production. We continue to create and innovate new toys with our partner Broadcast RF to make the production different and more attractive to the viewers. This recent addition has proven to be the best available live bike camera and we are pleased the industry now has a fully working product for outside Road Cycling events.”

The VeloVue Road has in built data control allowing remote switching of power, frequency and other RF parameters as well as control of cameras functions, via a bespoke data control system designed by Broadcast RF.  This critical feature is essential in the successful deployment of an on-board Road Cycling camera, eliminating the requirement for large batteries to power the system for hours, thus saving valuable weight.

The inaugural three-day Hammer Series was eventually won by Team Sky after a thrilling Hammer Chase race on the last day, which was decided on the finish line.  The Team Sky bike, which narrowly pipped Team Sunweb and crossed the finish line first was fully loaded with a Broadcast RF VeloVue Road on-board camera.