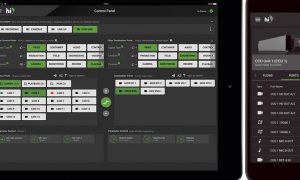 A more human interface: Broadcast Solutions’ HI GUI on an iPad and smartphone

Broadcast Solutions used last month’s IBC to show off a new 12-camera OB truck, an IP-based control system and a Concept Van that was used to demonstrate the power of mesh networks to set up radio camera links beyond the line of sight.

The latter was set up as a wireless hub to show off the capabilities of Silvus Technologies’ radio links, as Broadcast Solutions is its distributor.

These radio links use bi-directional Mobile Networked Multiple In, Multiple Out (MIMO) and Mobile Ad Hoc Networking (MANet) technology where each radio can work as a sender or relay, which extends the signal beyond its normal reach.

The company has already carried out a project using this technology, covering stock car racing events in China, where there was no line of sight between the OB and the pit lane.

Instead, it used three radios as a self-healing network. “If you have a connection, it connects automatically,” said Andreas Höflich, PR manager, Broadcast Solutions.

This is military technology, and the security industry has been Silvus Technologies’ main customer so far in Europe. Broadcast Solutions is the exclusive partner for broadcast for Silvus, but this is the first time it has really been promoted in Europe.

“The radios are tiny, so you could equip each motorcycle in a MotoGP race with cameras and links,” Höflich said, noting there can be up to 20 different HD signals with a single connection line.

The system offers several different IP-connectivity options, so the nodes can be easily integrated into existing infrastructures and connected to various devices such as cameras, mobiles or comms.

The smaller, dual antennae, Silvus Streamcaster SC4200E series radios are available in 1W and 4W output versions. These are useful as body-worn systems for unmanned vehicles, or other applications where higher power is not needed. They offer data rates of 100+Mbps, with have multiple frequency band options, integrated bi-directional voice communications and Ethernet, serial and 2x USB interfaces. These were used in the China stock car racing project, with HEVC codecs to provide low latency (20msec) HD streams at 6Mbps.The four-antennae SC4400E radios come in 1W or 8W output versions, and are aimed at vehicle integration, fixed infrastructure and long range airborne or maritime systems.

The Concept Van used as its test bed is designed to be as flexible and independent as possible, and was equipped with a large battery bank allowing it to operate silently for up to 20 hours. Its design can be adapted to a wide variety of needs, from being a wireless hub for news, sports and events, or a VAR, edit or replay vehicle.

The IP-based control system showcased by Broadcast Solutions at IBC was the Human Interface (HI). First introduced at last year’s show, it has since started being used for various projects including the large new Videe OBX (which was on show at IBC,) and for IBC TV.

HI was designed by a team of developers that the company set up in Hungary. “The idea was to rethink the control system from scratch and make it as easy as possible to use, so that it doesn’t need engineers to configure,” explained Höflich.

It uses touch-based graphical user interfaces similar to those people are used to on their phones. “The user comes first, to make it as easy as possible to control the system,” he added.
A prototype version of HI was used by Riedel at the last Winter Olympics to switch signals on digital signage and Riedel has recently incorporated HI into its SmartPanel, so it can be used for intercom and for switching signals, to save space in an OB.

It is already installed or going into 20 to 30 projects, including some OB vans built by Broadcast Solutions, such as four identical 16-camera OBs bought by Belarus TV and used this year for the European Games in Minsk.

Speaking to an engineer from a London-based sports production company who had gone to IBC to find a new control system for its studios and production control rooms, HI had been one of the most interesting control systems he had found. He particularly liked the ease of control. However, he thought it currently far better suited to OB vehicle use than for studios. Although Broadcast Solutions has integrated it in several studio/PCR projects, including some German shopping channels, the vast majority of its installations so far have been in OBs.

Broadcast Solutions’ latest S12T Streamline UHD OB is a compact, truck-based version of its S12 12-camera trailer, and built to show the technology can work in smaller vehicles.

Although the systems integrator is currently building its first fully IP OBs, S12T uses 12G SDI, “as some of our customers are not ready yet to go the IP road,” explained Höflich. It still has customers making their first steps from SD to HD, while others are shooting UHD HDR.

In tests Broadcast Solution has carried out, it has found that, “12G SDI appears to be best to address this problem of complexity of UHD cabling,” particularly for more compact trucks.

One approach the company favours is building OBs with a Riedel MediorNet, which means customers can then move to IP easily when they want to. “The challenge is for the end-user in the OB, as it has to stay the same for them whether it is SDI or IP, and that is difficult now,” Höflich said. “If something goes wrong during a broadcast most people know what to do with SDI, but not yet with IP. MediorNet is one way to give people a way to be ready for the transition.”

The OB was fitted with a Ross Ultrix router, also taking care of video/audio routing, multiviewers and embedding/de-embedding, as well as a Grass Valley Kahuna 6400 (2M/E) video switcher. It had a Lawo mc2 56 MKII audio console, a Riedel Artist intercoms system and Draco tera equipment for communication and connection. Additionally, it is also the first of the Streamline family of OBs fitted with the HI control system, looking after video/audio router, multiviewers and tally.

Broadcast Solutions also showed a new ENG van at IBC, one of seven it has built for VRT Belgium, which is designed to be as comfortable as possible for an editor in the field. While not an electric vehicle, it has sufficient Li-Ion battery power for up to four or five hours editing before the generator kicks in.

There is room for two workspaces at the custom desk inside, and editors can work and transmit as they are travelling. Other equipment used in the van includes an Axon video router and multiviewer, a DHD audio console with Genelec monitors, plus a workstation running Adobe Premiere and several storage cards. For data transmission Broadcast Solutions integrated Pepwave LTU transmitters as well as a TNG system plus a LiveU200 for camera-mount use.