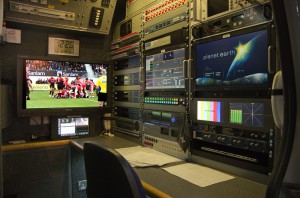 Inside the TES 51 van: Monitoring is done using an Evertz 4K multiviewer and Sony 4K screen

BT Media and Broadcast has introduced its first Ultra HD and 4K Outside Broadcast links vehicle, which Sky Sports used last week on its 4K tests at the Ryder Cup. The van was used to deliver the UHD output direct to Sky in west London and to BT Tower for BT’s internal monitoring. The truck can deliver multiple HD, UHD or 4K signals over fibre and satellite. “It’s a very, very capable truck. It can do two satellite uplinks in HD simultaneously, while outputting UHD via fibre,” said Neil Huggins, head of occasional use services, BT Media and Broadcast.

“It is a little bit low on power to do satellite uplinks for Ultra HD, although that is still to be tested and depends on what compression system is acceptable, which depends on codecs and modulation schemes,” added Steve Burgess, CTO of Megahertz, which built the vehicle for BT TVOB, the service provider arm of BT Media and Broadcast.

“BT has an extensive fibre network at a lot of sports and cultural locations, so can deliver via fibre from most events. All the Premiership football and rugby, and major cricket grounds, and big arenas, like the O2 and Excel, are connected, as is Buckingham Palace for state events,” said Huggins.

All the events BT has done in UHD so far have been trials, such as BT Sport’s 4K tests at Twickenham, but it believes 4K and UHD will become a major requirement in future, “so we wanted to make the truck future proof. We want our infrastructure to be at the cutting edge. Our truck can do it, and our fibre network can do it,” said Huggins.

“It is important for us at BT to be continually at the cutting edge of outside broadcast technology, meeting the developing expectations of our customers,” he said. “We were the first to provide an HD capability, and the first to do 3D.”

The truck is also in constant use for HD productions. BT currently has 15 fibre-only trucks, and five hybrid fibre/satellite trucks (of which this is the latest).

It is fitted with NTT 4K encoders and decoders, as well as a 4K monitor and test and measurement equipment. “Apart from that, the main difference between it and the other hybrid trucks is mostly configuration, because the UHD signal is comprised of four 3G HD signals, and the way this truck is done it is in quadrants,” one for each quarter of the picture, explained Burgess.

The router is configured so that groups of four sources and destinations are locked together. “Keeping them together and timed is the key, so you don’t see the joins when they are put back together,” he added.

It chose NTT compression because “we’ve had experience with them in the past, and they have proved to be very reliable and helpful. Also, they have a history of doing UHD in Japan,” said Burgess. “We just plugged them in, and they worked.”

“We do a lot of on-the-day events. You arrive, do the set up, and broadcast. So, if the encoders don’t work, then everything else is useless,” added Huggins. This is particularly important for football, where the rights go for £6m a match, “so you can’t have a single point of failure.”

The truck can deliver two 1GB fibre paths at once, and also has spare network terminating equipment (which connects to the fibre) that can be quickly swapped in if something fails. It uses the same 2+1 configuration for its network control equipment. “We always have a plus-one in the truck in case of equipment failure,” he said.

For satellite uplinks, it has a fully motorised 1.8m AVL dish equipped with two 400W amplifiers, phase combined, allowing several HD carriers to be uplinked simultaneously. Both fibre and satellite links can be used at the same time, allowing it to send multiple feeds from the venue to the studio.

“Besides being powered from an external generator, the van has a built-in [12kVA diesel] generator, and a UPS to keep working for about 30 minutes if anything goes,” added Burgess.

“This is the only truck in the UK that can deliver all these services – possibly even in Europe,” said Huggins. “This truck is at the cutting edge of outside broadcast delivery.”

Completely fitted out, the truck, TES 51, cost about £500,000, and was reconfigured from an existing HD links vehicle, in a Mercedes Sprinter van. The design included custom coachwork, and the technical area includes a 96-port Snell router capable of handling a mixture of 4K, 3Gbps and HD baseband signals, and ASI transport streams.

Multiple signals are monitored via a 4K Evertz multi-viewer and on to a Sony 4K screen, with two HD Plura monitors for additional qualitative signal monitoring and an HD Phabrix for test signal generation and checking.

BT TVOB provides a delivery service from all the major sporting and event locations in the UK (more than 150 locations), via fibre and satellite, to broadcasters and production company headquarters. The BT truck sits alongside the OB production vehicle, accepting multiple feeds which are then compressed, multiplexed and fed to the broadcaster via the BT Tower in London, or direct.