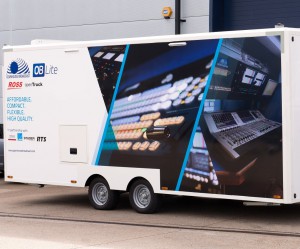 At BVE 2015, Gearhouse will be showcasing OBLite, its the live HD production trailer, as well as demoing its new Hitachi SK-UHD4000 4K cameras.

OBLite is a fully-equipped, live production HD trailer. It can easily house a seven- to eight-person production and operation crew. It’s easy to up- or down-spec as required and offers low power consumption, ergonomic design and features a production gallery, audio workstations and an engineering control area.

Gearhouse Broadcast placed an order for the first 50 of Hitachi’s new SK-UHD4000 camera systems at IBC2014 – the same event at which the camera was launched. The SK-UHD4000 is a broadcast 4K ultra-HDTV camera system which can take the 2/3-inch B4 mount lenses used in conventional HD broadcast cameras. It outputs HD and 4K video signals separately, which means that it can be used in the current HD environment whilst capturing archive or test material in 4K.