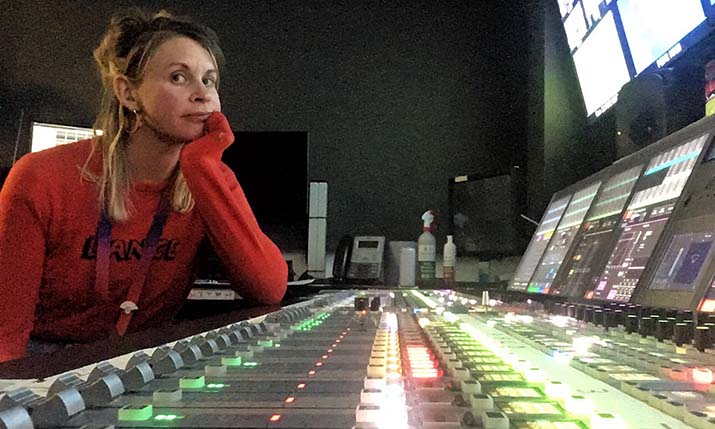 Emma Penny, A1 at Sky Sports

“Live sport broadcasts are definitely one of the most challenging environments I’ve worked in; I suppose I like a challenge,” says Emma Penny, Sky Sports A1 sound supervisor. “The technology is often at the forefront of all other live broadcasting. The job itself is fast paced and relies heavily on the abilities of its engineers to get a big event to air within the rig time. I like the camaraderie of working as a team to get a large live event to air.

“It’s also great to overhear someone in the pub saying they watched an event you worked on, knowing that people at home got to feel a part of an event because you played a part in capturing it for TV.”

On how she got into her career which has led her to the A1 path, like many who have ended up in sports broadcasting Penny says the job was news to her as a student: “I had no idea this was a career! My background was more in the arts studying literature and drama at university. The first time I got more involved in audio was as a producer and newsreader at my university radio station.”

“The biggest change I’ve seen in the last year isn’t in the technology as such, but more in the way engineers have had to adapt their job roles; often multiskilling and taking on new responsibilities”

She goes on: “I went to a news broadcaster in London to do some work experience in the newsroom in the second year of my degree and spent a day working in the gallery as the autocue operator. The next week they needed someone to cover an autocue op who had gone sick and asked if I could come back. I ended up staying on at the company as a freelance multiskilled operator (MSO) working on GFX output, autocue and dialling up comms in the sound room for lives into the news programme.”

“When they found out I could drive a radio desk I started mixing bulletins,” she adds. “Two years later when I finished university a full-time role came up as a sound assistant at the company. I stayed for another year full-time working at bureaux overseas as well as in London as an assistant and covering the other supervisors while they were on leave.” 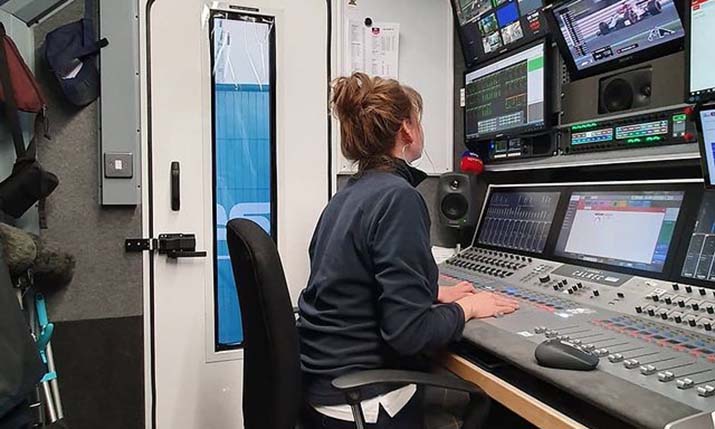 A1 Emma Penny mixing sound for Sky Sports on location at Formula 1 in her pod container, a home from home

Penny worked in news for nearly eight years as a supervisor, or A1, before she started working in sports broadcast as an OB truck audio guarantee, or A2. This was a sideways step career-wise, yet it ultimately led her in a somewhat upwards trajectory once she had the right experience on the job under her belt.

She explains: “As I had no background in sport and OBs I actually wrote to a few companies asking for shadowing opportunities. One of them called me back and mentioned they were hiring. We met and I was a good fit with the team, so they took me on as a trainee guarantee.”

“It was a sideways step and ultimately a jump down the ladder for me in terms of seniority and salary,” notes Penny, “but it has paid off hugely for me in terms of my skillset, knowledge and overall satisfaction in my job. The role was full on compared with news. I went from working a very structured schedule in a studio to travelling up and down the country following different sports and light entertainment (LE) events. I knew very little about the infrastructure of a truck compared with a studio, so the learning curve was steep.”

While working as a guarantee she got to practice her skills on a lot of large LE events, including The Voice and Glastonbury, as well as big sports contracts, including BT Sport Premier League, ITV International Football and Sky Rugby. 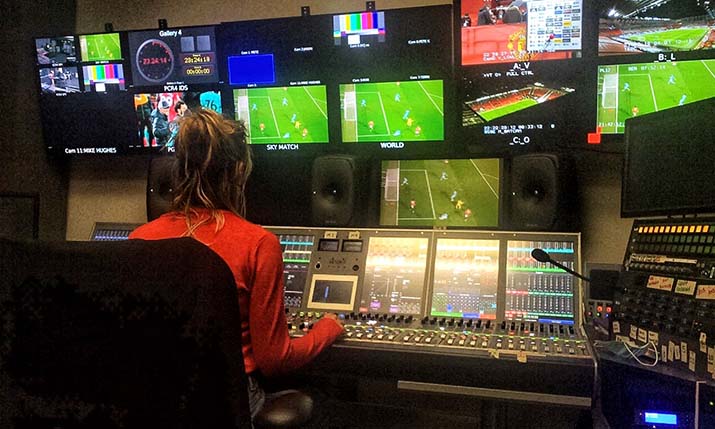 Not having studied a specific sound or broadcast-related subject at university left Penny feeling at a disadvantage for a while in her career. She notes: “I think I’ve had to work hard to gain the same level of knowledge as someone who might have studied in an academic environment.”

Additionally, being a woman in audio has made her career progression slightly more challenging. Penny explains: “There are very few women working in technical audio, whether that’s in supervisor A1 roles or guarantee, assistant, A2 roles. Whether it’s as a direct result of this lack of visibility or not, people continue to be surprised when I arrive on site and tell them I’m the supervisor for that job.”

“I’ve had people come to shadow a show and questioned whether I’m really the one they’re shadowing,” she continues. “I’ve had other engineers tell me not to worry about the details of a technical issue or finer details of a complicated set up as, “it’s not the sort of thing someone like you would need to know”. Not every encounter I have is negative, of course, and there are plenty of examples of workplaces that are supportive and show equal treatment, but there is no doubt that working in broadcast as a woman comes with its challenges.”

“In the early parts of my career I spent a lot of time looking for a mentor to help navigate the potential career paths open in live TV and particularly live events and sport,” she continues. “It was difficult to find information about the roles that are out there and available. I strongly believe that mentoring and teaching on careers available in sport broadcasting is essential to getting the best results. If the right people don’t know to apply for the job a company will always miss the right people.”

On why there is such a lack of diversity in audio for sports broadcasting, Penny comments: “I think there’s a lack of knowledge that these roles exist and fewer role models that represent diversity (whether that’s diversity in age, gender identity or racial identity) in the industry. Education about the jobs in the sector, transparency about what the roles involve and traineeships are all good and necessary ways forward.”

On advice she would you give to other people – women particularly – looking to move into a role in audio for sports broadcasting like her own, Penny says: “Don’t be put off by the fact there aren’t many of us out there! A lot of ‘well regarded’ A1s have a huge catalogue of credits which makes it hard to picture how you could ever work in that position if you’ve not worked in sports broadcast before.

“But more than that, a role in sports broadcast is about working with a crew towards a shared goal, problem solving, communication… The skillset is a lot wider than it might seem and that requires a lot of different abilities and backgrounds. As technology is moving and roles are changing it’s more important than ever to employ a diverse range of people, and women are just as qualified for the job as anyone else.” 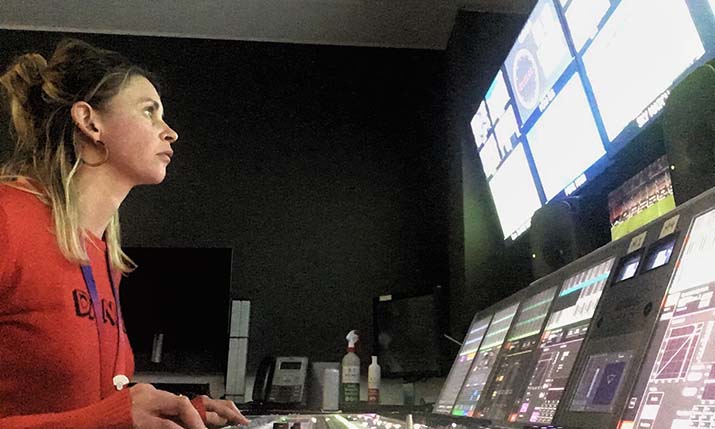 Emma Penny at Sky Sports working on a Premier League match in May this year. She says on the way job roles and processes have changed over the past 18 months: “I think [it] can only be good for the industry going forward as people become more appreciative of the roles of others and technical processes”

As to how Penny moved into Sky Sports, she says: “I had previously worked for Sky as an OB guarantee so knew what the company worked on and how they went about it. I interviewed for a position as sound supervisor and started out helping with Sky’s first large remote production; Formula One.

“It’s great working with other people on the production team to produce huge events, integrating technology and building a set up to satisfy an end goal (pun not intended!); the satisfaction of pulling off a huge live event that lots of people are watching at home,” she adds.

The most challenging element of working in live sport audio today is the remote aspect, she says. “Making a lot of our sports that had previously been produced entirely on site and are now going remote has definitely been a challenge this last year.

“Honestly the biggest change I’ve seen in the last year isn’t in the technology as such, but more in the way engineers have had to adapt their job roles; often multiskilling and taking on new responsibilities. The biggest change I’ve observed in the studios at Sky is that we now produce most of our sport remotely, with a crew on site and a dedicated truck engineer plus a crew in the studio replicating the role that a truck engineer used to perform.”

She adds that this move to remote has benefitted the audio department: “If anything we’ve gained crew in the sound department and everyone’s job is slightly different. It’s a change that I think can only be good for the industry going forward as people become more appreciative of the roles of others and technical processes. I think in the next year the developments in technology will now start to come.”

This has been a time of exciting change at Sky Sports and, for Penny in the audio department, a new cloud platform has been a highlight. She says: “I’ve been involved in the development of a cloud-based broadcast platform at Sky. This has allowed us to broadcast fully remote Netball Superleague matches while harnessing the benefit of on prem and remote from home working solutions. This has been ideal while we’ve been pushed for space because of enforced social distancing measures.”

There have been a lot of highlights in her career so far, and Penny comments on two that have really stood out: “Formula One has been a huge privilege to work on. The engineers I work with there are some of the best in the business and it’s always satisfying to see an event that huge go to air for viewers all over the world.

“That being said, I think the Netball World Cup in Liverpool in 2019 is probably my biggest highlight. Myself and a small crew were responsible for not only Sky’s output, but the host feed that was taken by other competing countries. It was only the third time the World Cup had taken place in England since 1963, so it’s an event I may not work on again in my career!,” she concludes.