ESPN’s ever-expanding coverage of sports events big and small has provided the company with an opportunity to produce those events on every scale imaginable. There are, for example, the multi-day efforts for US Open tennis, the megacasts for college football and the robust NBA, MLB, and Monday Night Football productions.

But continuing expansion of coverage of smaller events — the kind that historically never would see any coverage, let alone coverage by ESPN — is giving the production team a chance to take advantage of automated production systems to deliver quality coverage as efficiently as possible. 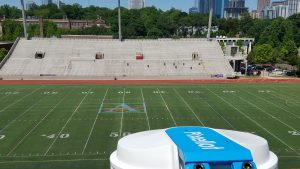 According to Chris Calcinari, SVP, ESPN and ABC Sports Remote Productions, the team is now feeding a lot of different platforms, and, as ESPN+, ESPN3, and college-conference networks continue to grow their content offerings, there is a need to find new ways of working. The most recent advance is the use of two automated production systems from Automatic TV, a Mediapro company, and Pixellot to cover America East sports at seven venues on four university campuses: Massachusetts, Vermont, Stony Brook, and Hartford, CT. The sports covered initially will include soccer, field hockey, lacrosse and volleyball.

“We’ve been working with both companies over the past year to optimise the systems and get them to a 1080p level, where they could stitch the cameras together and output 1080p at 60 fps,” said Calcinari. “We also worked hard on the ball-follow algorithms, developing RTMP streaming for transmission, and then also having an HD-SDI output so that an IP encoder could transmit signals back to Bristol.”

One interesting thing about the systems is that they can tie into the scoreboard operations, making it possible to insert an automated clock and scorebug. The data is input either directly as a feed or from a secondary camera shooting the scoreboard. Announcers are also onsite in a booth that will be a permanent addition to the venues.

“Both systems are operating at a pretty high level, and their strengths are obvious,” said Calcinari. “They are very efficient because, with one system, [sports producers] can cover as many games as are taking place. [After installation], the extent of our involvement is an online user interface where we can schedule the system to turn on and off through our traffic department. The only overhead is the commentary positions, and we just need someone from each school to turn it on and test it.”

The use of an automated production system can sometimes cause consternation among those who typically produce live sports events, but Calcinari notes that the systems are not replacing anyone because, without them, the events would not be covered.

“It comes down to our trying to expand our audience and use innovative ways to cover things we never covered in the past,” he explained. “Without these tools, we would not be able to expand our coverage.”

Mario Sousa, head of sales and marketing, Mediapro US, says that working with ESPN gave his company a chance to work with a valued partner and make the system suitable for higher-end production. The University of Hartford and Stony Brook University will each have two systems: one for an indoor venue and one for an outdoor venue.

The move to 1080p 60fps required new servers as well as new cameras. In addition, the rig that the cameras are mounted on also had to be redesigned: the two cameras sit next to each other, feeding separate signals into a single server. Those two signals are merged to create a single very high-resolution stitched panoramic image.

Current developments for the system, he adds, include creating a true multicam system with, say, sideline cameras and tactical cameras. With improvements in artificial intelligence, he says, that system will be able to move beyond following the ball or object of interest and could also automatically switch from one camera to the other and also produce automatic replays.

Pixellot has been working with ESPN for two years, according to president, US, Dave Shapiro, with tests at UT Austin, UC Irvine, and, like Mediapro, the NBA Summer League. Pixellot Prime is the automated production system being used by America East, and Shapiro notes that, once the system is installed and setup, it can be supported remotely.

“America East has people announcing, etc., but the video part is 100% automated,” he said. “And we have technology that hooks into the scoreboards so we can pull all the stats from the scoreboard and have the bottom line that you’re used to seeing on ESPN that shows the logos of the schools, the score, and the clock. Then the audio feed is tied into the broadcast.”

Pixellot Prime uses four cameras located at mid court, and one of the new features the company is working on is the ability to offer multiple angles via cameras placed at the baseline or end zone. Coming soon is the ability to use a GoPro or off-the-shelf camera for things like youth sports.

“We are now up to 6,000 systems that we have installed on fields and courts around the world,” added Shapiro. “In September, they produced 55,000 hours of live sports content. A lot of those hours are coming from high schools and multisport facilities that use Pixellot Show.”