There were more than 4,000 eSports tournaments globally in 2018, a number that will rise this year thanks to a total prize pool of some US $200m, comparing favourably with the $135m for ATP Tour tennis. This makes it a major draw for competitors – the highest paid eSports star is estimated to earn about $6m per year.

It also had a global online and TV audience of 410m last year, with more than 165m enthusiast viewers (each consuming more than five hours per week). There are also large crowds going to live events, such as the 173,000 that attended the Intel Extreme Masters in Poland over one weekend.

There is “a huge base now of users, of viewers, and of professional sports people” in eSports, Carl Hibbert, associate director, Consumer Media & Tech, Futuresource Consulting, told delegates at the DTG Summit in London this week.

Futuresource has spent the last six months working on a research report on eSports, which will be released shortly. Hibbert defines eSports as “a monetised video gaming competition with an audience,” and both the monetisation and audiences are rising rapidly.

Gaming is already one of the main consumer spends. In the UK, almost as much is spent on video games as on music and home video put together, and it is growing faster than both.

“It already dwarfs certain other mainstream sports,” he said. Ginx is the world’s largest linear TV eSports channel, reaching 55m homes worldwide, operating ten channel feeds in nine languages. It is distributed via Zixi online, with its library stored on the cloud and playout via edge servers, and has a staff of only 40, creating about 1,000 hours of content a year. Its investors include Sky and ITV. 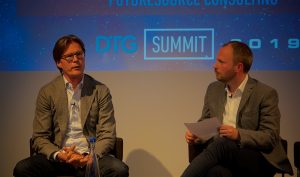 One barrier to eSports growth would be too few hours in the day, but Hibbert argued that this is less relevant to the younger audiences that eSports often attracts, as so many children already multi-task while they watch TV (more than 60% in the UK according to one of its surveys), with 55% of those playing games, 36% chatting online, 26% watching other video on second screens, and 16% listening to music at the same time. This trend is particularly noticeable in the US, UK and Germany.

However, eSports is not just something for kids, as another of Futuresource survey showed that 25% of all people in the UK watch eSports each week (compared to 48% watching Netflix). In the 16-25 demographic these figures are 55% and 74% respectively, with viewers in that age group watching an average of seven hours per week – compared to nine hours of Netflix. Although viewing of eSports dropped off considerably amongst older people, there were still about 8% in the 46-55 demographic, and even a few percent in the 66+ group.

This is why the global market for eSports should break $1 billion next year, with an estimate of $922m this year and a predicted compound annual growth rate over the next four years of 18% per year. Currently, 41% of that total comes from sponsorship (of events, teams and individual players), 21% from media rights, and 20% from advertising.

These advertisers have changed from being purely PC/game focused (such as Intel) to general consumer goods (such as Coca-Cola, Mercedes and McDonalds) seeking to engage this elusive demographic, who are less likely to view linear TV.

In terms of rights, the Amazon-owned Twitch network paid $90 last year for the Overwatch League (one of the main games). Hibbert admitted that is still “relatively small change” compared to traditional sports, but could prove to be a bargain for Twitch.

Global audiences for eSports are expected to almost double (to 800m) by 2023, and should be given a further boost by the Paris Olympics in 2024, when eSports will be a demonstration sport, helping to move esports from being an “isolated niche, slightly nerdy eco system” to gaining wider acceptance in the mainstream media.

One Chinese city plans to invest $2 billion over the next five years in eSports, including a dedicate university campus, esports zones and funding for companies.

Hibbert expects virtual reality headsets to be a major growth area for eSports. Not only are they far better suited to gaming than to pure video, there is a lot of investment in them for gaming, including as “an immersive spectator experience” – dropping the spectator in to the game play.

Ginx is a payTV channel, with advertising, but is also moving towards supplying eSports content to other platforms. “We are beginning to help organise local, white-label or Ginx-branded leagues. We are helping digital engagement with online tournaments, so we are seeing ourselves both entering the physical space of tournament organisations and the digital space of tournament organisations,” and becoming a partner to other distribution platforms, explained Bakker.

As its business model evolves, it is also developing its own direct-to-consumer platform, which will launch in late Summer. “Obviously, we have an advantage there, because eSports is a digital native phenomenon, so for us to deliver a platform we know the vernacular that people are looking for. Our platform will be bespoke. It will contain lots of gamification and itemisation to incentivise play” and improve engagement, he said.

Bakker believes that eSports sees television as its pathway to “Premier League sums of money”, but its model will never be 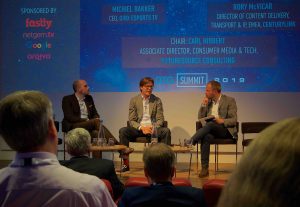 Rory McVicar, Michiel Bakker and Carl Hibbert made up the eSports panel at the DTG Summit 2019 in London

the same as traditional sports as it already makes all of its content available online simultaneously, so “those rights are valued in a different way to exclusive Premier League or European football rights.” However, there will certainly be more rights coming to market, as well as bigger consumer brands spending increasing amounts of money in eSports (such as Audi, Vodaphone and Mercedes), and traditional TV is getting interested.

“There are multiple ways for broadcasters to engage with eSports,” said Bakker. For example, Turner has created its own league, which has been very successful, “with very television-centric staging and better production values than anything that has gone before.” Japan’s Nippon TV has bought a team and NBC/Universal runs an Open championship.

“Television is very good at telling stories and then focusing on the human aspect of something, and eSports (and gaming in general) is not about that at the moment.”

While there are some stars, like Tyler “Ninja” Blevins who is reputed to be the highest paid gamer in the world, the creation of personalities in eSports is developing slowly, and it will take greater TV exposure to make them famous and tell the stories around the events. “There is a lot of value that can be brought there,” he said.

He also sees great “shiny floor potential” for eSports, particularly in the Battle Royale games, where 100 players are whittled down to one winner. “You could see a phenomenal shiny floor production where this is all playing out live,” which could really take eSports mainstream.

eSports distribution is a lot like traditional television, but without many of the legacy problems, according to Rory McVicar, director of content delivery, Transport & IP, EMEA, CenturyLink, which is a tier 1 internet backbone provider with 450,000 route miles of fibre around the world.

Like television, the internet is a constraint on eSports, as it wasn’t designed for video. “There was always the challenge of latency and bandwidth,” and this applies just as much to eSports. Companies like CenturyLink have addressed this through content delivery networks, which McVicar looks after, handling particularly latency-sensitive distribution, like video.

However, one problem is that “everything is a latency-sensitive application now. If you are in your office you are generally using tools which are not on your computer any more, they are not on your phone, they are somewhere else, and you are expecting a level of performance which is at parity with what you knew before,” he said.

“At the same time we as broadcasters and content producers have moved to the cloud, there has been an interesting schism that has opened up. We’ve become increasingly centralised in how we transform, process, deliver [and] acquire content,” so that consumers are causing a roundtrip of data and content every time they interact with their devices and expecting it to be instant. To counteract that, the network has had to become the new data centre, allowing as much as possible to be done as close to the user as possible.

In eSports, it means that something that was previously isolated (playing a computer game) has become an entertainment that hundreds of millions can take part in and interact with. To help with this, CenturyLink is looking at rendering workloads, which is “super-important in gaming but also important in remote editing of productions,” and the acquisition of content using SMPTE standards (such as 2110) for remote productions – an area that is just as applicable to eSports as it is to broadcast. “It is basically just different flavours of TV,” said McVicar.

“One of the advantages for eSports is it doesn’t have the legacy of broadcast and it doesn’t have massive business with its linear broadcast underpinnings, which it is trying to build on with the growth of OTT,” he said. This allows companies like Ginx to build out something quickly to a massive scale, delivering to multiple territories with just 40 people.

“It is similar to how you’ve seen the rise of platforms like Netflix, where they didn’t have any legacy so they had the luxury of starting afresh, but there are unique lessons to be learned [from eSports for traditional broadcast], such as ‘What is TV for a young audience?’

“Ofcom mentioned [in an earlier session at the DTG Summit] how interactivity is an important component part of the viewing experience for a younger audience,” and McVicar can see how a highly interactive form of content like eSports can deliver these audiences in ways traditional TV cannot.