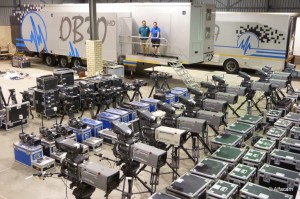 Euro Media Group has acquired the technical resources of Alfacam.

The European sports production industry has been waiting to see what would happen to Alfacam’s fleet of OB units and technical resources after it filed for bankruptcy protection last October and today there is resolution as Euro Media Group acquired them this week. Euro Media says the move reinforces its presence and makes it uniquely positioned at a worldwide level, most notably with RF wireless technologies, and with the take over of Alfacam operations in Brasil.

“Since its creation, Euro Media Group has contributed to accelerate the market consolidation in order to provide broadcasters and producers with more and more technology, innovation and expertise,” says Thierry Drilhon, CEO of Euro Media Group. “The acquisition of these technical resources will contribute to support our long-term growth. With the Tour de France coming soon, and the FIFA World Cup in Brazil in 2014 Euro Media Group confirms its strategy and its industrial business model.”

The Belgian subsidiary of the group – Videohouse – will be in charge of leading the integration together with group management. The deal expands Euro Media Groups assets by 12 HD OB units as well as two mobile sound units, and other facilities as well.

Euro Media Group managed to acquire the assets after one of India’s largest industrial groups, Hinduja, was unsuccessful in its attempt to close a deal earlier this year. The Commercial Court of Antwerp granted an extension to Alfacam Group regarding its ongoing negotiations to become part of Hinduja until 5 May, with Alfacam.