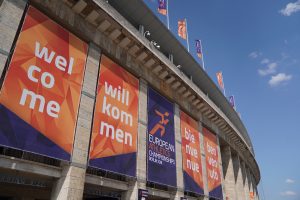 The inaugural European Championships took place in Berlin and Glasgow during August 2018.

Taking place in Berlin and Glasgow during August, the first-ever edition of the European Championships was widely declared to have been a triumph of organisation and sporting achievement. But the multi-sport event was also notable for its extensive, EBU-masterminded technology trials involving the capture, processing and distribution of live UHD content with High Frame Rate (HFR), High Dynamic Range (HDR) and Next Generation Audio (NGA).

The trials revolved around the live distribution of UHD content with both HDR and HFR. In Berlin, a 2160p100 HLG/BT.2020 production workflow was established in collaboration with EBU members BBC, France Télévisions, IRT, RAI, ZDF and multiple technology partners. The 2160p feed was used to derive two additional 1080p100 and 1080p50 signals. The resulting three feeds were then encoded in HEVC and multiplexed for a live transmission via the the Eurovision satellite network to RAI’s experimental test bed in Italy’s Aosta Valley, and via the fibre infrastructure of host broadcaster Eurovision to the European Championships Broadcast Operations Centre at BBC Glasgow.

Eurovision Media Services CEO Marco Tinnirello reflects on the video side of the demos in a far-reaching interview published by SVG Europe in August, but the audio component was also critical. For this, activity focused on the 1080p100 programme, which included NGA sound in the form of 4+7+0 channel and scene-based beds. There were also four additional interactive mono object signals for two commentaries and audio descriptions, underlining the capacity for interactivity and personalisation heralded by NGA.

The NGA project came together quickly, with the first email exchanges between the EBU and its collaborators taking place as recently as March. Mason recalls that “from fairly early on in the process we knew that we wanted to explore two main aspects of NGA – the immersive, three-dimensional spatial audio; and the object-based, interactive component. It soon became clear that 11-channel spatial audio (7+4+0) and four objects would give us the scope that we required.” 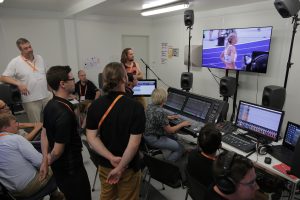 The team also determined that there would be three NGA streams: one in Dolby’s AC4 immersive and object-based audio technology; one compliant to the MPEG-H standard; and one acquired with Qualcomm technologies to produce the scene-based bed, but with the final mix compressed with MPEG-H once again.

With extensive technology trials already in motion on the video side, De Jong says there was a strong impulse to be “careful about adding complexity, but the Eurovision team was extremely welcoming and supportive of the entire trial. We were very happy with the cooperation – and the end-result.”

Not surprisingly, there was an extended “process of refining our plans and drawing up schematic diagrams – working out where the additional microphones were going to go, how we would get the signals to encoders, and so on.”

One early setback was the realisation that “our dream of interoperable metadata was not going to be available in time,” says Mason. “We had the idea that we could define the loudspeaker and object configuration at the start of the production process, then have that signal flow throughout.” But with the relevant metadata standards still some way off completion there was no alternative other than “to redraw the diagrams and make provision for the metadata to be added later on”.

Impact within the stadium was relatively minimal, “with only a couple of extra microphones added”, including the Schoeps and Areitec ORTF-3D microphone outdoor set. Meanwhile in mix world, an SSL System T S300-32 mixing console with 3D panning and network I/O provided the centre of operations. “So of course there was a lot of dialogue between Dolby, Fraunhofer, Qualcomm and SSL about how to connect everything together – whether to use MADI, HD/SDI or AES67,” recalls Mason.

Ultimately, although some IP-based transport was deployed, the bulk of the responsibility fell on the 64-channel MADI connection established between the stadium and the broadcast centre. “With the three NGA streams we had three parallel workflows going on, which obviously made the set-up quite complicated,” says Sunna.

Nonetheless, Mason notes that “once we were into the actual period of the Games everything was pretty ‘smooth sailing’.” As the trials took place the multiple audio streams could be viewed internally on-site in Berlin, Glasgow, and at the RAI facilities in the Aosta Valley; there was no public accessibility for the NGA production, or indeed any of the trials on the video side.

Sunna confirms that the project teams have still yet to sift through the results of the NGA trial in great detail, but already a number of key observations have come to light. For Mason, “the metering and monitoring of loudness was not as good as it could have been. We were relying on one screen at one end of the console; it was a bit small and we had to keep turning sideways to see it! So in future I would definitely factor in more prominent metering.” 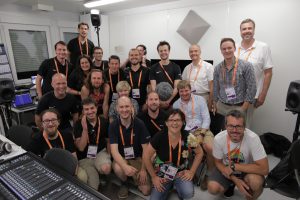 The multi-broadcaster, multi-vendor team that worked on the EBU NGA trials in Berlin

The trial also brought home the fact that “panning in 3D space does mean an extra dimension in which to get things wrong, as well as the new creative possibilities that it represents!” More thought also needs to be given to “the incorporation of the PA into [NGA mixes], which is picked up very well in a spatial audio production. It does offer new opportunities in terms of presenting events, and these can be explored further.”

In addition to the aforementioned efforts around metadata standardisation, future NGA trials are also likely to benefit from additional progress in the development of user interfaces. “I think we are all in agreement that user interfaces have not been standardised yet,” says Mason. Some aspects are already clear – “from the audience perspective, yes, there is immersive audio and there is the possibility of changing the relative level of the commentary, selecting your language, etc, but [this has to be delivered in a way] that is accessible and avoids confusion.”

Although there is a general consensus that NGA is still in its formative stages, there is also palpable excitement about its possibilities. Further trials at other landmark sporting events, including those in 2020, seem likely. In the meantime, Sunna notes that the European Championships project “provided us with a really nice, safe environment in which to try out different things. The result is that we have a really great legacy of knowledge and understanding that we can apply in the future.”