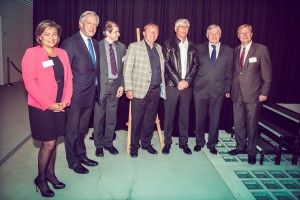 EVS has been settling into its new 22,000 square metre facility in Liege, Belgium, for the past few months, but it wasn’t until this week that it really became a ‘home’. Local government officials and others came out to check out the new and expanded facility that not only gives EVS room to grow, but also brings operations that were formerly spread out in different buildings up to a kilometer apart under one roof.

“The new building facilitates interaction between people and the sales, support, and R&D departments,” says Nicolas Bourdon, EVS, SVP of marketing. “That kind of exchange is part of our DNA, but the configuration of the previous buildings could not allow it.”

Philippe Prince, EVS facility manager, says that the previous operations were spread over three sites that were up to a kilometer apart and also seven buildings.

“Even when they were close to each other it was not convenient, especially if it was raining,” says Prince.

The new building increases office and facility space three-fold and also gives the company room to grow from approximately 330 employees on site today to more than 500. At the centre of the building is a large atrium with three floors above ground and two floors below ground (plus a parking level). Most importantly, there is plenty of flexibility with the space as it can be rearranged to create more office space or more space for training, production, or quality control.

Visitors to the building are greeted on the groundfloor where an auditorium for about 75 people is located as well as six training rooms. The -1 level includes the production area, product support, hardware R&D, and system and hardware integration. The -2 level is where the warehouse is located, as well as testing of up to 80 racks of EVS hardware.

That is no small accomplishment considering how much computing power is going on in a facility where dozens of EVS servers are constantly running in quality control, production or test mode.

“That is the biggest challenge regarding being green as we have engineers working here,” says Prince.

Getting to that point includes the use of solar panels on the roof that can offset 5% of electrical needs. But the real trick was making use of the heat generated by three data centres located in the corners of the building, as well as servers that are running in the production area, R&D and training rooms.

The building also features floor-to-ceiling glass on every floor that is above ground, resulting in a large amount of sunlight entering the building, something that also lowers the need for lighting and, in turn, electricity. And by simply having all of the departments under one roof the amount of energy (and time) spent moving equipment and people from one building to the next results in a more “green” operation.