EVS operator to director: Nikki Beers on her path from sports broadcasting in Holland to the Tokyo Olympics 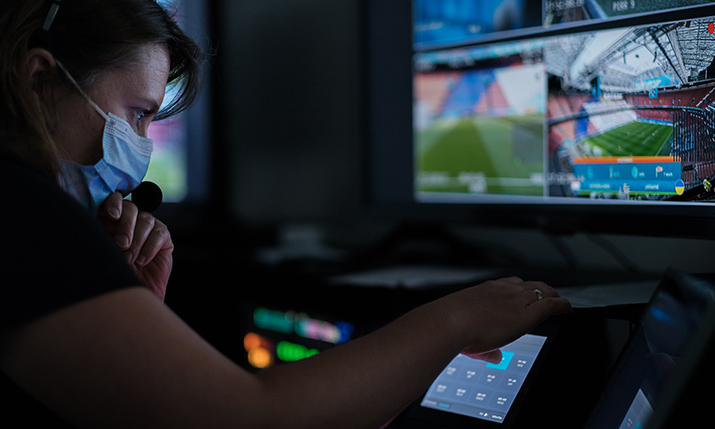 “It’s a bit of an odd story how I got into the TV broadcasting world,” writes sports director, EVS lead and assistant director for entertainment shows at Argus Productions, Nikki Beers. Right now Beers is in Japan working for Olympic Broadcast Services at the Oi Hockey Stadium as assistant director on the South Pitch.

“I was studying International Organisations and Relations (IOR) at university in Groningen, the Netherlands, (with the dream to become the next Kofi Annan), and I was working in a restaurant to pay the bills. One day I was talking to my grandmother and I told her about my part time job and that I didn’t like it. My grandmother told me that her neighbor, “did something in sports and television” and that I should call her, so I did. The neighbour, Sonja, was an EVS operator living in the Hague. After a short conversation she asked me if I was interested in a job as EVS operator. I was a big sports fan and television held something magical for me, so it was a win-win situation.

Loving life in the OB

“I had no idea what an EVS or replay operator was, but I said yes. The first moment I walked in the OB van I loved it.  It was at a football match of FC Groningen and I directly loved the vibe, the speed, the concentration, that excitement that what you do will be seen by so many people. There is no way back when you make a mistake and that sort of stressful work attracted me.

“I finished my studies in IOR (2009), but knew then organisations like the United Nations aren’t as pure as I thought and I was definitely not going to be the new Secretary General. So I choose to do the Master studies in journalism, specialised in Radio and Television broadcasting. After working in in this crazy TV world for almost two years, I knew that was the path I was going to follow. 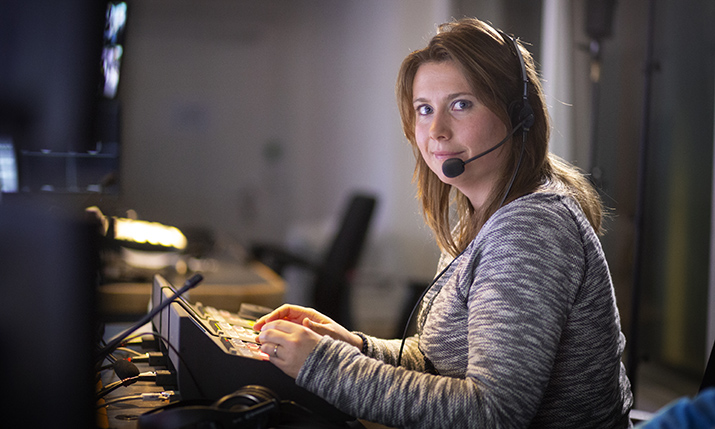 “There was no doubt anymore, I wanted to become a sports director and for that I started working hard as EVS operator, assistant director, lead EVS and now as director of Dutch talkshows”

“In 2008 I started as an EVS operator, but soon I was interested in the role of the director, so I combined the two worlds – studies and work – and wrote a master thesis about the role of the director in live sports registrations. I wanted a scientific view in how directing decisions are made so I interviewed 16 sports directors in the Netherlands. Talking to them about our discipline made my interest in the job even bigger. Why they make the decisions they make, and why are their ideas so different? And what makes a decision a good one? How you combine storytelling, entertainment, arty shots and hard journalism?

“I have the honour of being the assistant director for hockey. With 17 cameras, five replay operators and 28 matches on our pitch, it will also be a great challenge at one of the most beautiful sporting events out there. Especially in this time when everything is different than usual, this Olympic Games will be unique”

“There was no doubt anymore, I wanted to become a sports director and for that I started working hard as EVS operator, assistant director, lead EVS and now as director of Dutch talkshows. When I started working in 2008, I worked for Eyeworks and I was a freelance replay operator for a while. My clients were all Dutch companies. But in 2015 I joined Argus Productions and they helped me a lot with my career. Argus Productions is an international enterprise residing in The Netherlands, Belgium and Germany and contributing to the world’s biggest events. We work with UEFA, OBS, TV Skyline, NEP, EBU, HBS, ESPN, Southfields, NEP, United, NOS, Videohouse and many more.

“You will understand that this was a very good decision and that suddenly there were so many more opportunities for my career. In addition to that, my colleagues are very involved and can also give me just that little push that is needed, giving me more certainty and self-confidence. And with questions about jobs where they have more experience, I can always call them and thanks to their experience I get very good advice.

“But why sports director? Simple, I love sports, to do and to watch. As child I was practising judo, played tennis, did gymnastics and I played football for a quite some time. Related to work; I love it that you have no idea what is going to happen, that you can’t rehearse the show, that it will never go the way you expect and that it is always live. You can’t make up for a mistake, because it was already on air, so you need to have full focus and that gives adrenaline.

“And I need to be honest, besides sports I also like to work at big live events like election day, Kingsdag and all kinds of memorials for our national TV. Besides sports my interests are in politics and history and I’m so lucky I can work in television and mix those interests. But most important, it needs to be live, I love the thrill.

“Now it seems I only like the job as a director. That is not true, for example at the UEFA Euro 2020, I was EVS lead in Amsterdam and that was one of the best jobs I ever did. With 44 camera’s and 12 operators it was amazing to do the four matches. Or a month ago I had the combined function of assistant director and editor-in-chief at an athletics game, the FBK Games. I was nervous and it was a puzzle. But when everything fell into place it was such a nice relief. And there are so many more great jobs I had and have as an EVS operator.

“But my dream is to become a full time sports director. And I’m really lucky I already had some awesome jobs. One of my first jobs as sports director was at the European Championship Athletics in Berlin in 2018. I was an assistant director during the marathon, the speed walking final and the pole vault tournament. At some point there were two disciplines at the same time so I got the chance to direct pole vault myself. A great experience in the beautiful Olympic stadium of Berlin.

“I believe in a ‘never stop learning’ principle. And for that, you sometimes have to say yes to things that make you really nervous. But if it’s been successful, it’s a fantastic learning process”

“Another highlight in my career is the UAE Tour. I was asked to direct the start of the Tour. For that I had to work with local people from Abu Dhabi and Dubai. To be honest, I was nervous for this job. What if they didn’t want to work with me, a short woman from Holland? What if it is a problem I’m a woman? What if there’s a language problem, that we don’t understand each other? Some of those problems did exist, but to overcome these uncertainties and problems, felt awesome. It was a great experience and I learned so much of it and it makes me eager to do more. 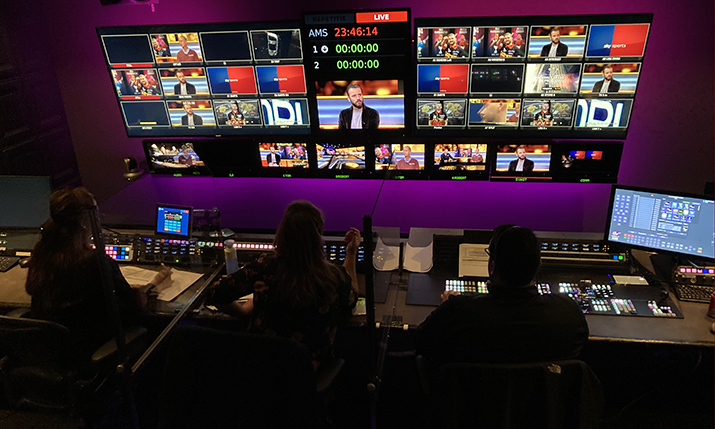 “Another job I don’t want to leave unmentioned is my work as studio director of darts shows. It’s probably not what you expect but I love darts and those evenings in the studio are great. The vibe is good, everyone from cameraman, to editor in chief, to audio engineer, is in the mood for a night of darts. That makes the role as director even more fun, you can create new shots, new light shows, new audio effects, because everyone wants to get the most out of it.

“Now I’m really looking forward to the Tokyo Olympics. I have the honour of being the assistant director for hockey. With 17 cameras, five replay operators and 28 matches on our pitch, it will also be a great challenge at one of the most beautiful sporting events out there. Especially in this time when everything is different than usual, this Olympic Games will be unique.

“And the future, who knows. Of course I hope for more and bigger jobs as a director and I’m going to commit myself to that. I don’t have a specific match I’d like to direct yet. I do hope that I will become a good director, a valued one, whom everyone likes to work with. I also hope that I can make my own mark and take the lessons from my thesis with me and find my own balance between art, entertainment and journalism in a registration. 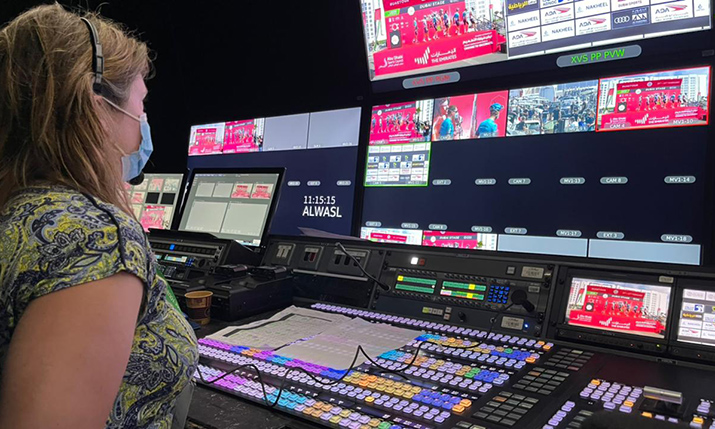 “Of course it is not all perfect, great, brilliant and exciting. There are some big challenges in working in the live sports broadcasting. The late hours, the weekends, the flexibility you need to have in a world based on a nine to five mentality. Since I have children this is more challenging then ever. But take a break in your career is not really an option, if you say no to a job, someone else will take it. And you might lose great opportunities. At least that’s a fear I always have.

“Even when your child’s birthday is coming up or they have their swimming exams or they have – out of the blue – a day off, it is difficult to make the right decision. It happens so often that other mom’s ask me if I’m away again? Do I not miss my children? Do I never feel guilty? Of course I miss my children when I’m on a trip abroad, but I think I make the right balance between my private live and my work. But somehow, it still feels like it’s not fully accepted yet, if you as a woman, value your work more than average. But my husband and children are not complaining, they are doing really good, and for me, working in live television makes me happy and I believe that’s really important in the role as a mother and as a colleague. Besides I can never work behind a desk from nine to five; I would be the most unhappy person in the world.

“My advice to other women; that’s a tough one. My own goal (and that’s also the spirit of Argus) is to improve myself constantly in order to become better and better every single day. I believe in a ‘never stop learning’ principle. And for that, you sometimes have to say yes to things that make you really nervous. But if it’s been successful, it’s a fantastic learning process.

“In addition, you always have to be yourself, be honest and don’t become the mean, arrogant director, because you feel you have to be so, to get there. I hope eventually honesty, being nice, having talent and begin knowledgeable will overcome the conceited, bluffing people. Although reality shows that it probably takes a little longer.”