EVS serves up aces aplenty at the French Open 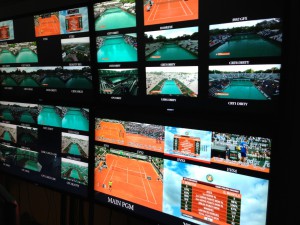 The skies were inauspiciously bleak and so it proved: the players had barely warmed up before the heavens opened. But all was dry and (relative) calm inside the broadcast compound at the 2013 French Open, where France Télévisions, Input Media and various clients of Presteigne Charter are undertaking complex workflows with the assistance of EVS technology – including, for Input Media, a potentially significant test that uses EVS C-Cast to deliver highlights footage.

First stop was the FTV logging room, where EVS’s IPDirector software is enabling personnel to execute an average of 300 logs per match. In total, some 14 units of IPDIrector are being used across the FTV operation at the French Open, while 20 XT/XS servers are deployed for the live production and ingest of multiple feeds.

On the largest court, Philippe Chatrier, FTV’s 14-camera operation sees all content being ingested into four XT servers, configured 4-in, 2-out. Ops are scaled down on the second largest court, Suzanne Lenglen, but not by much; here, content from nine cameras is ingested by a total of three servers, again from EVS’s XT/XS series.

The EVS servers are controlled by LSM remote control panels for the highlights creation and live slow motion, as well as by IPDIrector. The content management suite is also used for live logging, browsing and to send material to Avid systems. In addition, FTV is making use of Nano Air for graphics insertion.

FTV has been running tapeless at this event for six years while maintaining a tape-based workflow in parallel. But so confident in its tapeless operation has it become that tape will disappear altogether after this year, with future French Opens to be recorded solely to EVS XFile hard disk drives. 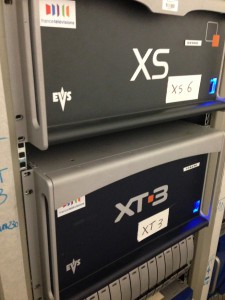 Whilst FTV masterminds the domestic feed, Input Media is overseeing international duties. From approximately 50 discrete feeds delivered to the MCR, 15 independent feeds are fed into the EVS servers – again drawn from the XT/XS series. Edit suites equipped with Avid Unity MediaNetwork and Interplay MAM systems along with EVS IPDirector are utilised to deliver a daily 52-minute highlights programme that is produced in addition to approximately 10 hours of live coverage per day. The majority of equipment being used by Input Media at the French Open has been supplied by Gearhouse Broadcast from its warehouse in Watford, England.

This year’s French Open also sees Input Media undertaking an interesting test using EVS’s C-Cast additional content delivery technology. Cognisant that, as Input director of technology Nick Symes remarks, some broadcasters are “interested in reducing access costs to the signal distribution chain”, the company is testing a workflow that incorporates C-Cast to deliver a three-segment highlights programme in low-res. Individual takers can then download the high-res version from the cloud service being used. If successful, the workflow could lead to reduced satellite uplink and access costs.

Finally, our tour of the French Open broadcast compound took us to Presteigne Charter – the UK-based rental company that is providing facilities for the Tennis Channel, ESPN and NBC – which has brought an EVS inventory of 18 XT/XS servers, 24 IPDirectors and two Xedio Dispatchers to Roland Garros. Once its work in France is complete, the company will immediately commence set-up at Wimbledon’s All England Club – home to the next Grand Slam on the calendar, taking place between 24 June to 7 July.