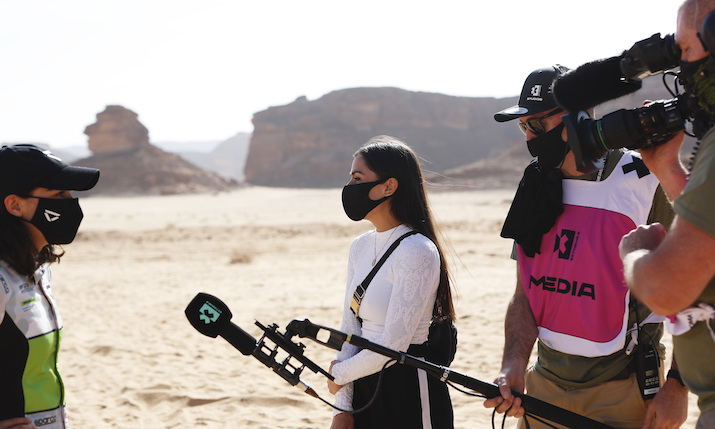 Jamie Chadwick (GBR) of Veloce Racing talks to the TV crew during the Desert X-Prix on 3 April in AlUla, Saudi Arabia. Photo by Sam Bloxham/LAT Images

The first three episodes in Extreme E’s magazine show Electric Odyssey are available to watch now through a variety of global broadcasters in 180 countries. This includes ITV in the UK, Fox in the US, Canada and Asia, TV2 in Hungary, Cosmote in Greece, ORF in Austria, SuperSport in Africa and TVNZ in New Zealand.

The 26-minute shows, of which there are 20 in total, feature behind-the-scenes access to the creation and progression of this new motorsport and take the audience on a journey through all of Extreme E’s race action and sporting insight as well as its stories of climate change, science, sustainability and exploration to keep the conversation alive between each X Prix.

Ali Russell, chief marketing officer at Extreme E, said: “Electric Odyssey is a great series creating additional depth to the storytelling of the championship and extending the conversation outside of our five events in 2021. The plethora of behind-the-scenes sports shows focusing on football, basketball and Formula One, for example, show the appetite for this kind of content. But more than that, launches of channels like WaterBear – home to Extreme E content – demonstrate the importance of telling the wider stories of the series outside motorsport.

“I’m delighted that so many of our global broadcast partners are airing this unique content that gives a true insight to the people and personalities behind our unique sport for purpose.”

The shows are being created by Extreme E Studios – a joint venture between Aurora Media and North One – and run from now until January 2022. Using a host of informed voices from drivers such as Sébastien Loeb, Carlos Sainz Snr, Timmy Hansen, Catie Munnings, Jamie Chadwick and Laia Sanz, team owners including Nico Rosberg, Lewis Hamilton, Jenson Button and Chip Ganassi, plus Extreme E spokespeople and its Scientific Committee, the episodes will tell stories of each of the race locations, the St Helena – Extreme E’s floating centrepiece – the climate crisis and the environmental issues each race aims to highlight.

Chris Carpenter, senior producer at Aurora Media, said: “Extreme E isn’t like many other sporting properties, there’s so much more narrative than just the racing. Electric Odyssey series gives us a fantastic opportunity to delve deeper into the many other aspects of this championship.

“It’s not just a sports magazine show – it’s a hybrid of content. Along with the incredible racing, we’ll be including features about climate science, adventure travel, sustainable technologies, and cultural and historical insights. All with the incredible natural back-drop of each event location.

“It’s going to be quite the adventure to make the series but a challenge we are relishing.”

The next stop for Extreme E is Lac Rose in Dakar, Senegal for the Ocean X Prix. Electric Odyssey episodes around this race will highlight environmental challenges in the region, the ocean crisis, the Legacy Programmes which include planting 1 million mangroves and supporting local community project EcoZone, plus all the racing action.