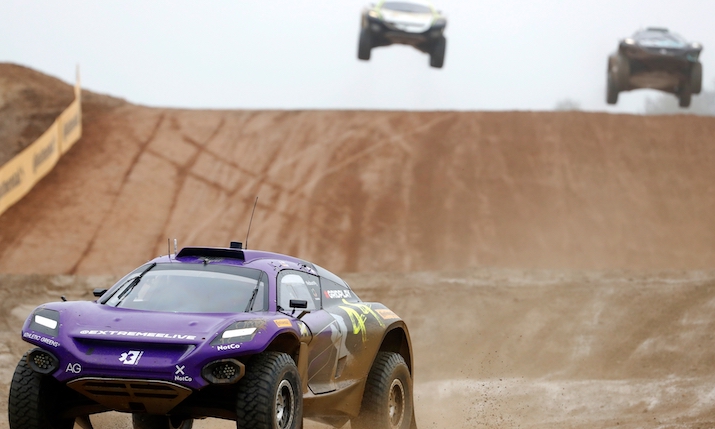 Rosberg X Racing (RXR) were crowned champions of the first season of Extreme E, securing the title after finishing fourth in the season-ending Jurassic X Prix in Dorset in December. RXR drivers Molly Taylor and Johan Kristoffersson took the title after winning three of the five events of the inaugural FIA-sanctioned all-electric SUV rally championship.

The Jurassic X Prix capped what’s been a very positive first year for the new sport, perhaps exceeding even the expectation of its founders. The second season drives off in just over a month.

In data supplied by Extreme E, live races were watched on average by 18.6 million people around the world, with a global audience close to 100 million across the season. Some 57 broadcasters aired the action, including Discovery, Sky Sports, Fox Sports, ProSieben Maxx, RDS, ESPN in Latin America, TV Globo in Brazil and Channel Zero in China. Interest was strongest in Europe, particularly from the UK, Germany and Spain.

Across social media the sport attracted one million followers, a total of 10.7 million engagements and 141 million video views. Of the 30,000-plus media articles it generated in 2021 (versus 13,957 in 2020) coverage was 97% positive (according to Kantar Media) with the main concentration being on environmental issues (35%) and electrification (32%).

“This is mass market here and now,” says Extreme E chief marketing officer Ali Russell. “The product has captured people’s imagination and proved the world was ready for something new. It’s been a huge success.”

The combination of motorsport competition and climate change evangelism is what Russell calls “sport for purpose,” speaking to SVG Europe.

He says: “We’re creating a bedrock for innovation and new technology and to use sport to communicate a topic that has failed to cut through with many people.”

Bravely going ahead and launching in the teeth of a global pandemic actually helped the product’s presentation on screen, he adds, “since people didn’t question why there were no fans at the tracks – which was our biggest concern at the start”.

COVID-19 did however impact the production behind the scenes as the inaugural event in Saudi Arabia, initially planned for March, was pushed back to April and a proposed event in Nepal had to be cancelled due to the complexity of getting to the region. A replacement X Prix in Argentina and another planned X Prix in Brazil also had to be cancelled as a result of the crisis in South America.

“We made a pre-emptive strike [in cancelling South America] because we felt that the pandemic was going to get worse and we didn’t want to all get there and find ourselves caught in another strain [of the virus]. What it enabled us to do was stick to the Mediterranean and closer to home where there were just as many options for creating stories.”

The season ending finale at Bovington army base was preceded by an X Prix on Sardinia.

Russell adds: “It’s clear that the impact of climate change is a challenge for Europe just as it is for the Amazon or the Sahara, so moving forward we’ll probably have more races closer to home than we envisaged before.”

Indeed, Scotland remains a possible host location on the 2022 calendar with Sardinia inked in for a return along with Neom – the green energy city being built in Saudi Arabia – northern Chile and Uruguay.

“Getting and in out of environments was very challenging and if we hadn’t owned our own ship it would have been impossible,” Russell says.

Extreme E used its own ship, the St Helena, which  acted as floating transport system, paddock, science lab and COVID bubble. Although running on a form of diesel, this mode of transport is a major contributor to the enterprise’s bid to lower the impact of the travel logistics compared to flying.

Production in all terrain

Production partner Aurora was involved from the championship’s inception and among other things shared responsibilities (with NEP and Al Kamel Systems) for presentation and design, the spec and delivery of facilities on site, and the design and integration of VR and augmented graphics.

“It was a challenge building a very forward-looking set of facilities and programming under a compressed time frame and amid COVID-conditions, but from race one onwards everything came together as expected,” says David O’Carroll, Aurora’s operations director.

“Our production team was amazed by the level of detail that Unreal worlds can be crafted in,” says O’Carroll. “The flatter desert setting perhaps didn’t show this off to its best extent but in Senegal, where the course featured trees and rocks, and in Dorset the detail in the graphical overlay was incredible.”

Extreme E worked hard to weave environmental education and information alongside the on-track competition in what has been described as a hybrid programming format.

“From a production perspective the team worked really hard to make the two consistent and equal –  and in a way that the audience didn’t feel was contrived,” he adds. 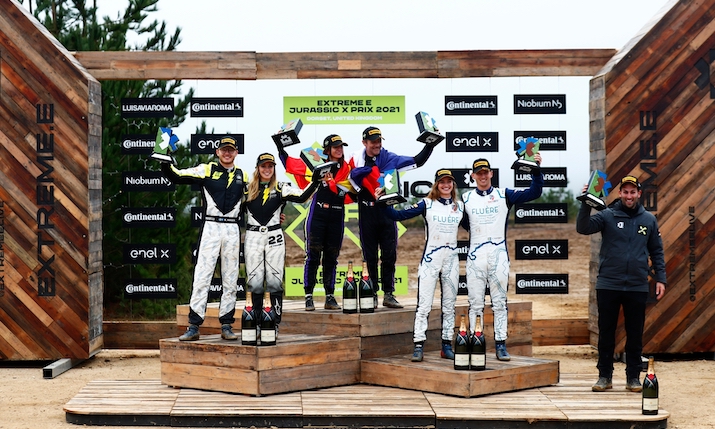 Connectivity at certain locations proved tricky but not insurmountable. Together with Spain’s Al Kamel, Aurora had built telemetry gathering systems that would work for all terrains.

“In Saudi we were racing in a valley and the RF coverage was a challenge and in Dorset, which had a tree-lined course, we were challenged with line of sight but our systems were up to the task,” continues  O’Carroll.

With the first race of season two only a few weeks away the team has taken the time to upgrade the kit (with the latest software) but believes there’s no time or real need for any fundamental overhaul.

“We want to evolve the production to enable us to get more content more quickly back from location to increase the depth of the programming,” O’Carroll says. “We also want to further reduce the number of people who travel to each site.”

Part of this involves more efficient use of satellite bandwidth to bring more feeds back to the London gallery and to extend network coverage between London and remote locations.

“We’d like to better control more kit on location remotely. It is easy to control a router for example remotely over fibre but not so easy over satellite. That is the trajectory we are taking,” he adds.

Russell points to the environmental legacy of season one, including the planting of one million mangroves in Senegal; and the creation of a climate education syllabus for over 3,500 school children across Greenland with UNICEF.

Another plus that should not be devalued by the focus on climate is the sport’s gender equality. Unique in the world of motorsport, each team has to field one male and one female driver, with equal roles for both.

“If you’ve got a product and only targeting half of the world it limits your growth potential so we’ve made an extra effort to develop equality in the racing environment,” says Russell. 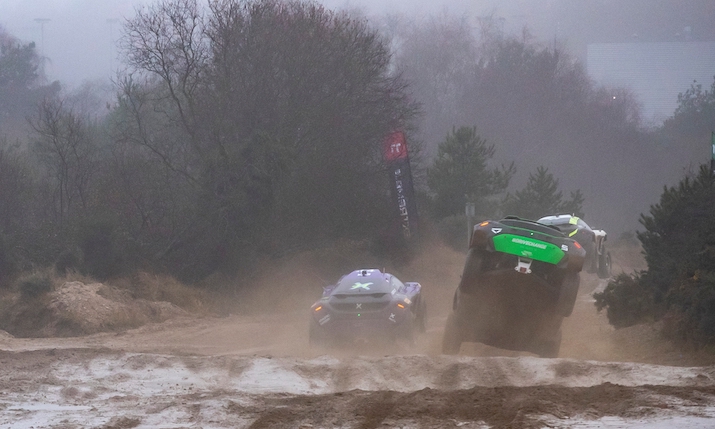