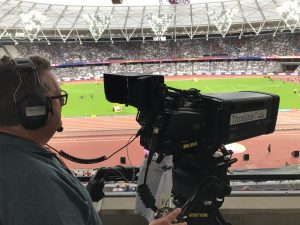 On site with Timeline Television at the World Para Athletics Championships

Channel 4 has excited audiences with coverage of world class performances over 10 nights of the 9th World Para Athletics Championships, from 14-23 July. Presentation for the broadcaster at the iconic Olympic Stadium is the responsibility of indie producer FilmNova, which aimed to build up to all the big moments and ensure that viewers learn about the personalities of those competing. In particular, and in a first for any major athletics championship, a Roving Presenter Camera is offering heart-of-the-action coverage right from the track and in the field.

“The Roving RF field camera, presented by Lee McKenzie, has been seen as a real innovation,” agrees Phil Sibson, FilmNova, managing director and event executive producer. “It has enabled us to be at the start line with Jonnie Peacock, David Weir or Liam Malone giving their expert view on how athletes prepare in the final seconds before their race, while we can see those athletes in the background of shot just a few metres away. Or we can react at the finish line as pundit Stef Reid celebrated with her husband after he won Gold. In addition, we’ve been able to speak to people in the crowd and present from the heart of the field competition on the in-field.”

None of this has ever been possible at a major athletics championship before. This is largely because with cameras pointing in all directions, any extra bodies trackside or on the in-field are likely to be noticeable in coverage.

However, FilmNova worked with the IPC and host broadcaster Sunset + Vine as well as Timeline Television to ensure that they only entered positions that wouldn’t impede on main coverage.

“It is also fair to say that there are less rights holder broadcasters present for the World Para Athletics in London, so our request wasn’t mirrored by lots of others,” notes Sibson. “The IPC are keen to help Channel 4 innovate athletics coverage, so were warm to our request.”

“From a production point of view getting permission to run a presentation operation from the field of play is a major scoop,” says Simon Fell, project manager, Timeline. “There’s been quite a lot of negotiation about where they can and can’t go. Mainly they’ve been around track perimeter areas because of course it is very tricky to stay out of shot. They have taken interviews though right next to athletes on the blocks which is a very unusual angle.”

There are, in fact, two RF camera operations: one radio cam for field event coverage, hubbed out of the Timeline’s UHD2 scanner, and a presentation truck built in a portacabin to accommodate a ramp for wheelchair access into which the roving pres camera is fed.

Vislink links are taken from a Sony HDC4300 and received in two orthogonal positions up in the stadium for good coverage. These are then fed over fibre to the OB units. Wisycom MCR42 radio mics are recording audio.

Early sight of the Sunset + Vine camera plan enabled FilmNova to strategically place additional cameras that supplemented the host coverage with shots of the British athletes. These include head-on cameras that provide both pre-race close-ups of British Athletes and SSM replays from the race.

“This means that even if the British athletes are not the main focus of the host coverage, we can still focus on them for our C4 audience,” explains Sibson. 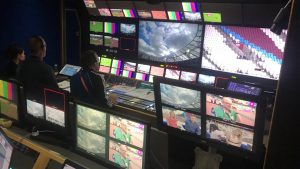 Also in partnership with Timeline, FilmNova developed and gained IPC approval for an RF wheelchair camera, which according to Sibson, would have provided fantastic live POV coverage during wheelchair races.

“However, we needed to persuade an athlete to agree to wear the camera and unfortunately this wasn’t possible, which is understandable given the fine margins in performance that they look to achieve,” he explains. “We are optimistic, though, that the work we have put in will mean this will become a real possibility for coverage at Tokyo. The recorded footage that we gathered from our testing is being used in features within coverage.”

The proof of concept – including a camera offering reaction shots back to the competitor and another facing onto the track with radio transmit and receive – was tested along with remote switching. It was all good to go but ultimately the athlete’s management decided they didn’t want to risk compromising his performance.

Although FilmNova is not producing a highlights package for the event, on rare occasions it has to take a commercial break meaning that the live broadcast is not back in time for the start of a race.

“Where that happens, we use EVS to show the race on a very slight delay,” says Sibson. It also has three networked Premiere Pro edit suites cutting feature material and closing montages. The field competitions by their nature are not fast moving enough for live coverage and so are condensed into updates that are played in from EVS and commentated on live.

In addition to the host feed carrying graphics with all the timing and data on it, FilmNova’s graphics provider, Moov, supplied a host graphics terminal that enables the production to generate graphics in the host style as needed for its own start lists or results. An additional Chyron in the presentation gallery produces all the Channel 4 presentation graphics, such as timetables, medal tables and social media.

While UHD2 is wired for IP, the event is a standard OB in practice. All the camera signals are SDI and with neither Sony nor EVS yet to introduce native IP sources, the signals remain SDI until they are turned into an IP stream for transport around the truck.

“As soon as we’re able to do that we can handle many more streams in the network switch meaning we can add to our system hugely in future,” says Quinn Cowper, lead vision engineer. “From a production point of view it’s business as normal. They are still cutting on the same mixers, pressing the same buttons but it’s a massive improvement for us in terms of scaling workflows and being able to take on larger jobs and contracts.”

UHD2 is also 4K primed, but the event is operating in HD. Timeline is fielding nine cameras, including RF, and mixing those with the host feed. Sony HDC-4300s with Fujinon UHD lenses are trained on Channel 4’s presenters, Ade Adepitan, Sophie Morgan and Arthur Williamsin situated in the studio, as well as Jeanette Kwakye, Sonja McLaughlin in the mixed zone. The truck combines host broadcaster feeds with these cameras and supports two transmission galleries including EVS XT3 servers and edit suites.

Around 1300 athletes from 100 countries are competing in 213 medal events.