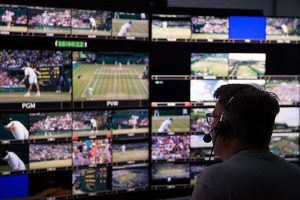 As first revealed at SVG Europe’s Future Sport conference in November, NEP UK and Fletcher Group have won a three-year contract to install and operate a robotic camera system that will provide automated coverage of the outside courts during the Wimbledon tennis championships.

The deal will see Fletcher Group implement its Trace tracking system on seven outside courts meaning that coverage of all 18 championship courts will be available to broadcasters for the first time.

The Trace system uses Light Detection and Ranging (LiDAR) sensing to pick up fine details on each player, allowing the robotic cameras to then track the action. SimplyLive’s ViBox system will be used for switching and replays.

In previous years, six of the outside courts at Wimbledon have been covered remotely using technology from Hawk-Eye.

Paul Davies, the head of broadcast and production at The All England Lawn Tennis Club (AELTC), said: “With the NEP/Fletcher remote camera system we have found an exciting and innovative solution to deliver robotic coverage of seven of our outside courts”.

Speaking at Future Sport (29 November 2017), at the Oval cricket ground, Davies said of the deal: “We had some fantastic pitches [but] we were very taken with Fletcher’s vision in this area of automated coverage, and they’re doing some exciting work. Their passion and vision won the day for them.”

The BBC still retains exclusive broadcast rights to show the tournament live in the UK.