Speakers from Perform Group and Premier League Productions took to the stage in Paris on March 14 to discuss the rapid evolution of league TV production around the globe.

The session was titled ‘League Production Perspectives: What’s Next for Football?’ Coverage of club football continues to evolve in a myriad of different ways, from additional cameras and new graphics packages to fresh approaches around presentation, commentary, workflow, audio and the use of data. 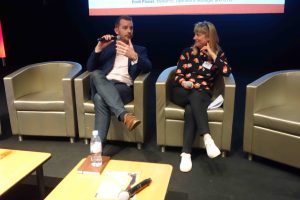 Asked about how Perform Group approaches production of Japanese league football David Rees said, “I think the way in which people approach our content is different. From our perspective we want concurrent viewers and concurrent content.

“We signed a ten-year deal to produce every single J-League game from their top three divisions live – which is 1044 matches per season. When you think there are 26 matches across the weekend there’s a high degree of concurrency there. You want fans of the different teams to be watching their team every single week,” he said.

“For 10 euros a month you know you can watch your team every single week, rather than having one great big appointment-to-view. You’re appealing to a wider audience at a decent price point, to come in and watch their team,” said Rees.

Does HDR, for example, figure yet in the production process for J.league? “As it stands no, we haven’t done any tests yet with HDR. It’s definitely something we’ll look into and is of interest, but at the moment it’s not something we’re involved with. UHD has to be of interest; it has to be. You can’t afford to ignore what’s coming, those technologies and advances. You have to decide when and where you take it on board,” he said.

Premier League Productions, based out of IMG Studios in west London, services 730m homes in 185 countries every matchday. There is a dedicated 24-hour channel available to licensees, and every single Premier League match is shown live across the globe with the same production values as any game screened by BT Sport or Sky Sports in the UK.

Given this background, session moderator Will Strauss asked Anna Ward if IMG has much lassitude to experiment with technologies while delivering this workload each week.

“We service all the international broadcasters on behalf of the Premier League, so we’re driven by what they want. Last year I think we distributed 76 UHD matches and this year there was less demand, dropping down to 40,” said Ward.

“However we do think that demand will grow next year following the World Cup, because a lot of licensees are using that as a driver to launch their UHD channels. We don’t have any control over that – but we think it will be a growing market. It’s hard for us to get information out of the licensees,” she added.

Does IMG receive any interesting, innovative requests from the licenseess around the globe?

“We do work a little bit in the dark, to be honest,” Ward admitted. “The licensees all want different things. It’s one of the challenges we have, in terms of delivery and standardisation.

“Are you going UHD-HDR; UHD-SDR; HDR 1080i? In terms of the technical environment we are doing some testing on HEVC high efficiency video codec, because obviously with that you can deliver to the same standard using less bandwidth – we think it’s about 25-30% better. We are in talks with suppliers to test that,” said Ward.

“Audio over IP is another area we’re looking at, obviously, with ISDN no longer available after 2020. We have a lot of connectivity with the football grounds, which allows us to have data channels – so audio over IP and HEVC are really the two we’re looking into at present,” she said.

What about remote production, another hot topic in the industry: are there any opportunities to go remote for the J.League in Japan, for example?

“Our Head of Football Nick Turner recently went to NEP Australia in Sydney to look at a match coming in from Melbourne,” said Rees [Ed Note: read Ken Kerschbaumer’s recent report on this innovative production here].

“Given the length of the term we’ve got with the J-League – we’re just now starting season two of ten – and given the volume of matches and the size of the country, it seems like the ideal opportunity to explore remote production further. Maybe with a central hub in the Tokyo area,” he said.

“It means from a talent perspective we could maybe pool a more condensed group of talent and keep the quality high among production staff – rather than having to travel the length and breadth of the country. It would be great to know that even if we lost one or two directors it doesn’t dip, and the QC remains high,” said Rees.

What about Artificial Intelligence; does football coverage lend itself to any innovative AI applications? “I think it’s very early days,” said Ward. “It’s definitely one to watch. There are roles that are repetitive, such as logging, where there could be an application. In terms of automated cameras, there is the opportunity to [produce] clips and highlights packages – but in terms of football, where the ball is in play for long periods, it’s a little bit harder than in other sports such as basketball. It’s definitely on the radar, but it’s not something that’s on the immediate horizon for us,” she said.

“I agree with Anna that you couldn’t have automated cameras as your primary coverage,” said Rees. “It is something you could use as a supplemental tool.”