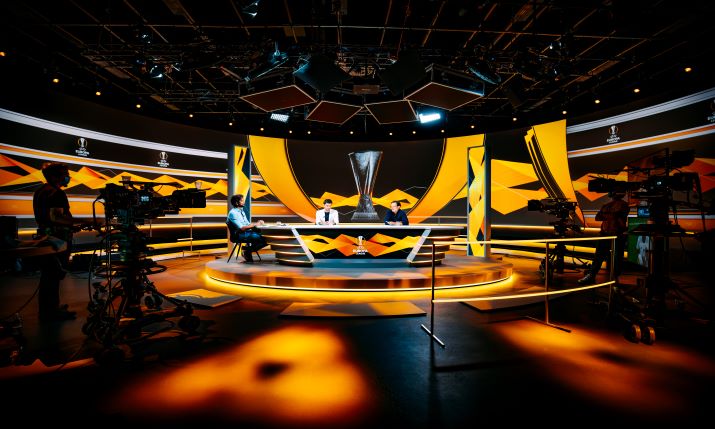 Fox Sports has ripped out its studios and galleries based at the MediaArena in Amsterdam and with the aid of NEP Netherlands, rebuilt them using a completely flexible, cloud-based system, all done while remaining on-air throughout the coronavirus lockdown.

The broadcaster has also switched out its live production studio cameras in favour of a cinematic kit set up that changes the look and feel of presentation for viewers.

NEP Netherlands – Fox Sports’ technical partner – is using its centralised production platform based in Hilversum as the host for all the new studio equipment. Fox Sports’ studio, around 50 miles away in Amsterdam, contains no active equipment anymore, which means it has a completely adaptable cloud set up.

Speaking to SVG Europe, Henk Van Meerkerk, head of production at Fox Sports Netherlands, The Walt Disney Company, says: “We’ve been rethinking our whole set up. We have new contracts with all our facility companies for our [football] games. We changed the whole studio, the whole infrastructure, hardware, software, and also lightning, new cameras, everything.”

The studio refit had been in the pipeline before the COVID-19 outbreak, Van Meerkerk states. “Everything was already planned but because of Corona, we [were able to spend a little more time on the set up].”

One of the new galleries at Fox Sports, Amsterdam

Theo Stam, senior solutions consultant at NEP Netherlands, helped Fox Sports Netherlands with the new studio set up and the connections between the studio and venues.

Says Stam: “We can easily scale [the production] on busy days with a lot of matches with adding additional EVS channels, for example. But on the days that we don’t need that power on the studio, we can easily use it for remote productions of matches.”

The previous system, based on 1080i, was delivered by NEP. Fox Sports spoke to NEP in early 2019, requesting an upgrade that would enable the broadcaster to produce in 1080p and UHD HDR, improving and futureproofing its coverage for viewers. Van Meerkerk says Fox Sports wants to be ready to switch to HDR when its affiliates request it.

Says Stam: “That was the main driver to do a completely new platform, and now we have made the step to a full IP 2110 infrastructure to make it as flexible as possible. Being part of the NEP centralised production platform means we can use all the resources we have available as well.”

Connectivity in the Netherlands is better than in many countries, so NEP does not need to compress content often, Stam comments: “With the bandwidth we have available in the Netherlands we can do a lot of uncompressed signals. Between Amsterdam, Hilversum, and the remote location, [we can use] mainly uncompressed signals. So for the operator there is no [latency]; there’s no compression so there is no additional latency at all.

“If we have to go for compression because there’s a bandwidth limitation, we use a unique compression technology with dead low latency that’s still within a video field of delay, so within 18 milliseconds; that’s not different than when you’re working in a traditional OB truck,” continues Stam. “So when the director is not on site, technically his shoes completely feel the same, like it is in an OB truck.” 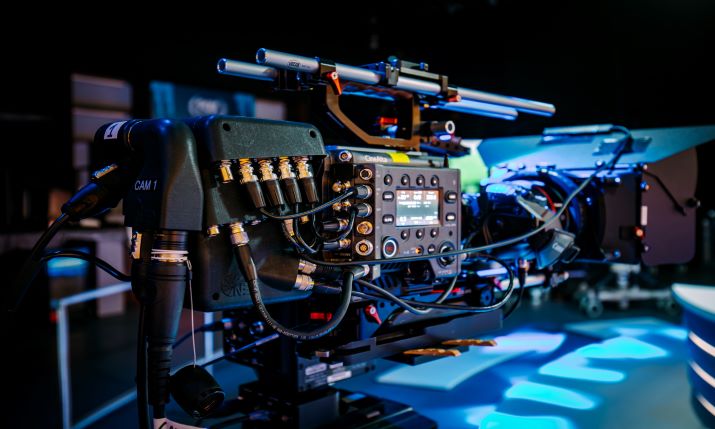 As well as moving to a completely cloud-based workflow and production set up, Van Meerkerk had grand designs on the studios themselves. He planned to move to a more cinematic feel for live studio output.

The idea for this came about around three years while he was in London. Van Meerkerk was flicking through TV channels in his hotel room when one drew him back; a news channel called London Live. The quality of the broadcast from the small news studio mesmerised Van Meerkerk.

He says: “I thought, wow, this looks amazing. The quality of the picture was so good. So I started to figure out how they worked. They were using photo cameras with photo lenses, fixed lenses, with Mark Roberts Motion Control [kit to control] the cameras.”

Van Meerkerk and a team from Fox Sports went to visit the “tiny” London Live studio around 18 months ago. He says: “It was really nice, but the only thing to worry about were all the cables,” from the set up, which were an obstacle for Fox Sports and its larger studio plan. However, Van Meerkerk loved the quality of the pictures being produced, so filed the thought away for future perusal.

Earlier this year Fox Sports began running tests as part of its upcoming studio refurbishment to find new cameras that would give Van Meerkerk the picture quality he was after. It ran a multitude of tests with different cameras from the likes of Grass Valley, Arri and Sony.

In the end, the Sony Venice with Canon CN7x17 and CN1025 cine prime lenses won through, including a zoom and view finder for the camera operator so they could operate the kit as usual.

The way in which the camera was chosen was, said Van Meerkerk, “quite funny”.

He explained: “We had two pictures, one was the Grass Valley UHD camera, also a beautiful camera, and the other one was the Sony with the Canon Prime lens. Then I asked Jinne Tania, broadcast specialist at Fox Sports – he’s a great guy and he knows so much – if you want to buy the jacket of our host, which camera would you buy it from? Which [picture] do you like the most?” He chose the Sony.”

He went on: “I think we were one of the first [broadcasters] in Europe (other than London Live) to start using these kinds of cameras, especially in a live broadcast environment,” noted Van Meerkerk. “It’s a more kind of a cinematic look and feel. That’s what I like, and I like depth in my shots, even in the studio. So we always try to create a lot of depth. With Prime lenses you automatically get more depth, combined with all the possibilities inside of the camera.” 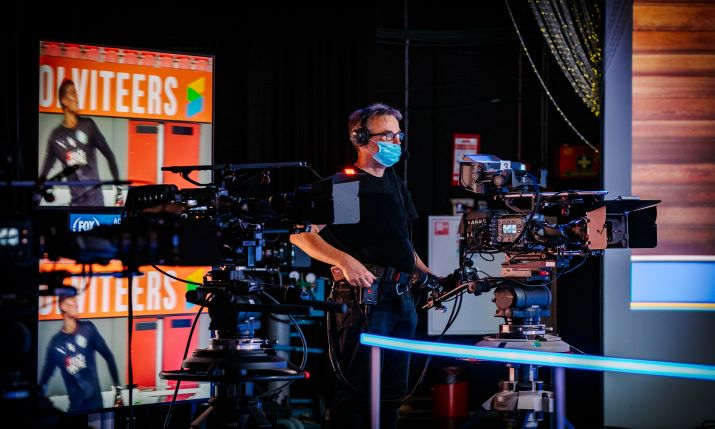 Meanwhile, the cables were still an issue, but NEP came up with a solution that was actually aimed at solving the issues of integrating a cinematic camera into a live production environment.

To do this integration, NEP developed a box that attaches to the Sony Venice. It was working on the box development right up to the wire, finishing just as Fox Sports prepared to go live with the Dutch multi-division football friendly matches being played from 31 July.

Docked on the camera mount, the box gives a camera originally built for the film industry the features that are required for live production. Those features are: external input (preview of the programme picture); intercom talkback; live shading; and an IP SMPTE2110 live output. The box is capable of SDR, HDR and HD and UHD productions.

Also, a fortuitous result of using the click-on box is there are only two cables coming out of each set up, solving the cabling issue.

To go with the new cameras, lighting needed to be considered to increase the cinematic feel further. Van Meerkerk said: “We needed new lighting. So we hired a cinema lighting operator [who worked] together with a live studio light operator. We combined them together to work and create something new for us that works [from a film perspective], but it also works for us in a live environment, because it’s two different worlds, as you know.”

He added: We’re still tweaking because if you start tweaking a little bit on the lights, you need to change the set ups in the cameras as well, which are all software-based. So it’s a mixture of working together with the camera, with shading, and with the lighting crew to get the best picture in the end.”

The studio itself has been further enhanced in terms of objects to allow the new depth of field provided by the cameras to have space to play, with over the shoulder shots.

Commented Van Meerkerk: “We can make more over shoulder shots, [which is] something you normally don’t do in a studio show, or not really often, but they look beautiful now because it’s really defocused in the front while the host is in focus. So it’s really different for our directors and our camera operators.

“Hopefully our audience will say, “wow, this looks great!”,” concluded Van Meerkerk. “I think they will; the sensation I had when I switched [back to London Live that time], I hope our viewers will have the same experience when they start switching to all the sports channels we have. They see our studio like, “wow, what’s this? This looks great!”. So that’s our goal.”

Dutch football returns with the start of the Second Division season on 28 August and the First Division from 12 September.