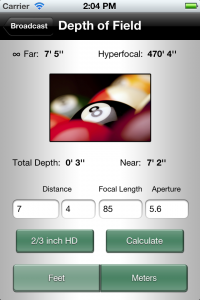 Fujifilm Optical Devices Division has released a new version of its OptCal “Select-a-Lens calculator,” which adds support for a variety of languages, including German, French, Italian, Japanese, Chinese, Spanish, and Portuguese.  This new app is available for use on iPhones and Android devices, as well as iPad mobile tablets.

Customers can access OptCal v4.1 for free.  The new, multi-lingual version became available on the Apple App Store and Android Market as of yesterday, July 11.

Developed in 2005, OptCal is a tool that takes the guesswork out of lens as it helps photographers calculate various lens formulas—such as field of view, angle of view, and depth of field. It can also compare those values when switching between lens formats and camera image sizes. OptCal will allow the user to calculate formulas for 2/3-inch, 1/2-inch, 1/3 –inch, PL mount and CCTV c-mount lenses for broadcast, digital cinematography, and security applications.

“We’ve made OptCal v4.1available in several major languages to ensure that videographers and photographers worldwide can use this utility to full advantage,” explains Thom Calabro, director, Marketing and Product Development, FUJIFILM North America Corporation, Optical Devices Division. “Videographers worldwide can now use OptCal in their native languages to determine how different lenses and focal lengths will impact shooting variables, such as the field or angle of view and the image size at a given distance.  And the ability to access it using the most popular mobile devices on the market means that it’s available whenever and wherever they may need it – especially when shooting on location.”