FutureSport 2015: Sandbox+ project indicates that IP is coming to live, but challenges remain 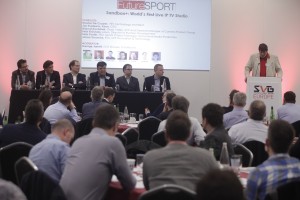 A straw poll of the audience at SVG Europe’s FutureSport (2 December) to gauge whether anyone was using IP for production now – or even in a few years – drew a blank. Yet IP is coming and while there is understandable reluctance to work with it today, the industry had better get ready, not least because it could be the answer to the demands of greater content produced at reduced cost.

IP live is already here – at least in working proof-of-concept at Belgium public broadcaster VRT. A presentation of its LiveIP studio concept was the basis for the FutureSport discussion.

Felix Poulin, senior project manager, networked media production at EBU – which initiated the project with the VSF and ten vendors under VRT’s Sandbox+ technology acceleration programme – explained that the aim was to build a multi-vendor system, to ensure an SDI-style reliability, and to create new, more flexible workflows.

“There are a lot of standards and protocols for transporting the signal, encapsulating the essence, compressing and controlling IP,” said Poulin “This is not the issue. The issue is how can we achieve interoperability when you have this complexity of options.”

Poulin’s team found a way, creating what he called a starter kit for SDI over IP. Boiled down, this meant using open standards for audio (AES67) SMPTE 2022/6 or uncompressed video and PTP to transport broadcast feeds via an SDN. The next step is to separate the audio from the video and the data, an approach titled TRO-3. This is undergoing interoperability tests with a view to being put before a SMPTE standards body.

“What we want to achieve is a plug and play and data rich environment where data is treated exactly like audio and video,” Poulin said. “All this data can be fed back in realtime to the control room, which is when we can really scale to the full potential of the new technology.”

The project is in three stages. Stage one was single camera, stage two was multi-camera, and stage three, which VRT is about to initiate, is to produce a multi-cam TV show, live streamed and broadcast using IP.

“The mission was to build a real TV studio used by real operational staff, not engineers,” explained Wouter du Cuyper, technology architect for VRT. “We can make a programme in this IP studio. It works. It is multi-vendor and we had great vendor collaboration. It was really a simple set up which we achieved in just three months.”

Sensing that the sports production community needed convincing of IP’s advantages, several speakers advocated the benefits of IP in futureproofing infrastructure to easily accommodate incoming transmission requirements like 4K, HDR, 8K and so on.

“Higher quality (i.e. 4K resolution images) is not the only factor driving the industry to IP,” said du Cuyper. “We are confronted with a lot of questions from producers and directors about doing more. They want more data to tell stories another way; they want more content to fuel digital and social first video strategies. But we must also be mindful of creating more media on a budget, to do more with less money. Maybe IP is the answer.”

Jeff Strößner, director of global events at LiveIP Project collaborator Lawo, also suggested that it was the demand for more content which will propel sports into IP. “We’re moving away from pure linear consumption of broadcast to nonlinear devices where people expect to get more content,” he said. “There needs to be an infrastructure that supports that. The infrastructure needs to be easily scaleable and that is what IT provides us.”

Marcel Koustaal, SVP and GM camera product group, Grass Valley, said the LiveIP Project was important because “instead of talking about IP live we took steps to make things happen”.

He noted that standards will evolve and that hardware, such as cameras, should be able to keep pace since the equipment is programmable to receive updates rather than having fixed standards baked into the chipsets.

Nonetheless, migration to IP will be no big bang with standards the main bugbear. In the meantime SDI and IP solutions will coexist.

“You need a bridge to both worlds so the industry can still use the investments it has made, in kit like production servers, and still connect those to an IP network,” said Johan Vounckx, SVP innovation & technology, EVS.

He tasked the industry with working on joint reference designs and implementations “to prove that IP works,” and to increase the common knowledge about how to deal with IP. “The solutions exist, the elements are there,” he insisted. “We need to know how to combine the elements.”

Standards are necessary to drive interoperability, he argued, since once interoperable you can tap into the power of industry as opposed to purely proprietary designs; “Your customers can genuinely combine best of breed solutions,” he said.

Another step, Vounckx said, is to adopt more COTS equipment, especially for networking. “I know there’s some reluctance to adopting COTS but there are many real case examples showing that COTS kit works.”

Jan Eveleens, CEO, Axon – another participant in the LiveIP Project – suggested: “We are still in a phase where some big companies are trying to set the market with their proprietary systems and the standardisation is trying to catch up. […] Everyone feels that IP is the direction to go and that SDI and cable will disappear, but it will take time. Standards are a complicated matter in our industry. We have ended up in many areas with dual or triple standards. We have multiple solutions for one single problem which, for a manufacturer, is unsustainable.”

He suggested equipment which had been proven to work in an IP live environment be badged with some certification. “There are very strong examples in the IT world where this has worked well,” he said.

“If we are honest we’d admit that IP technology is not really developed for live broadcast,” added Eveleens. “If you send an email no one really cares if it takes a second too long, but if you go to black in the Olympics for a second or more than a lot of people will suddenly care. The migration will take time. We cannot expect the same quick change we had from analogue to digital to be replicated from digital to network. Manufacturers, broadcast and IT experts need to make this technology useable for live broadcast.”

Education about the whole IP/IT piece also needs beefing up. “From an operations perspective we have to train our broadcast engineer to have more IT knowledge,” noted du Cuyper. “We need GUIs to analyse when something is going wrong and we need a new language to talk about these things.”

Vounckx felt that the IPLive Project had shown that operators don’t know and need not know the difference between the SDI or IP fabric. However, he said, broadcast engineers need to be more IT knowledgeable “and IT engineers who help the industry transition need to become aware of the reality of broadcast.”

Finally, there is security, an issue which Poulin admitted there was insufficient clarity on. “Even if we go in this direction we have to be very careful when connecting core infrastructure to the outside world,” he said. “This is something we really have to keep in the back of our mind otherwise security can become a real nightmare.”