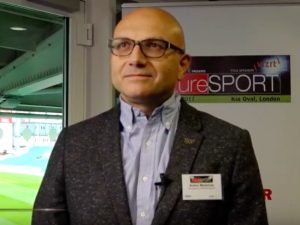 A new series of videos uploaded to SVG Europe’s YouTube channel feature reflections on IP, remote production and the year to come in sports broadcasting. They were all recorded at the FutureSport conference at the Kia Oval, London, on 29 November.

The four new videos are as follows:

Panasonic’s Andre Meterian on 4K innovation: The director of the manufacturer’s Broadcast & Pro-AV operation discusses the latest 4K camera innovation – on display at FutureSport – and looks ahead to 2018.

Hitomi’s Russell Johnson on new SVG Europe sponsorship: This interview covers the recent decision by Hitomi to become an SVGE sponsor, as well as some of the broadcast alignment technology specialist’s latest innovations.

The new videos – along with many others captured at other SVG Europe summits – can be found here: https://www.youtube.com/channel/UC23Sr4x-Oyxsr2wXaSKloeQ/videos.

The interviews were conducted by SVG Europe Editor David Davies and filmed by James Cumpsty.