FutureSPORT 2019: Breaking the deadlock for virtualised hardware in sports production 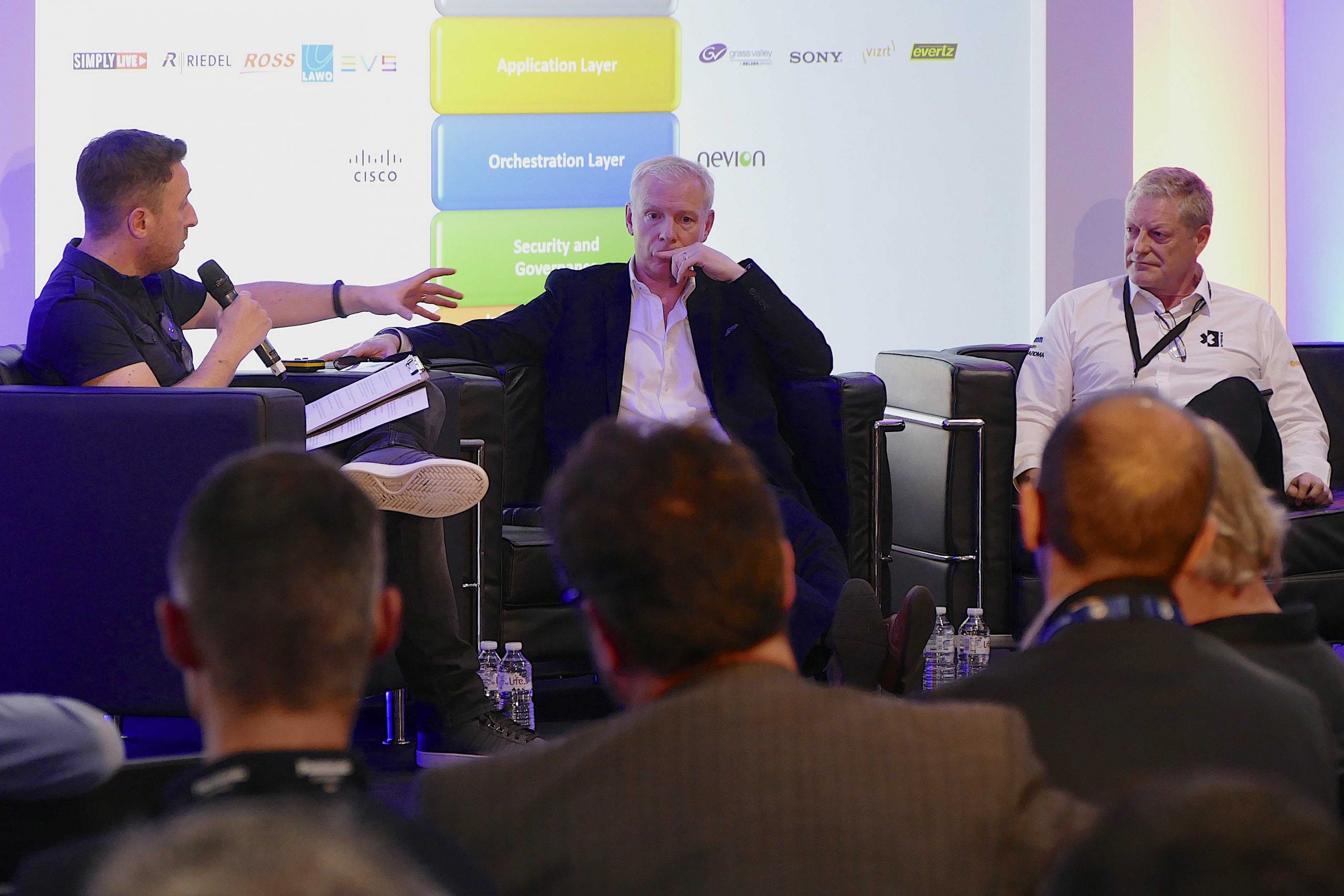 The next step for IP-based remote production from an event using a centralised gallery? Ditch the centralisation. That was the main message from the FutureSPORT 2019 session: ‘Virtualised Hardware for Sports Production: Breaking the Deadlock’.

Ditching the centralisation sees everything running on the cloud, using virtual hardware that can scale rapidly to allow multiple productions to take place on a Saturday afternoon, for example, without the expense of owning a lot of dedicated hardware for the rest of the week.

It will require the traditional broadcast hardware manufacturers and service providers to concentrate more on software (something many are already doing) and probably to change their business model as well. However, the change is coming too slowly for some rights owners, service providers and broadcasters who see considerable opportunities in virtualised hardware.

“The danger, for me, is that if we don’t understand what the timescales of this move to virtualisation are going to be then, potentially, we’re going to end up stuck in a cycle of investment which is effectively going to kick this can further down the road.”

As global sales, broadcast production and distribution arm of the ATP Tour tennis, ATP Media looks after some 41 tournaments globally, fed back to the production centre in London. It is “a travelling circus” that has benefitted considerably from centralisation. Now Warden is looking at how to take that further, and what partnerships it needs to have to progress.

Its tournaments can last seven or 14 days, often back to back, sometimes running concurrently, which puts great pressure on everybody, and on its centralised hub. “We can only build so many of these centralised facilities before utilisation is pretty much maxed out with the way all the sports are trying to juggle their own time zones,” said Warden.

It has found that being in different time zones can affect the quality of its product with staff having to work through the night in London and then heading home in the rush hour. To ensure its staff are rested it has often had to house them in hotels near the facilities. A more flexible way of working could avoid this.

“What IP starts to give us is the opportunity to decentralise what we do, and the decentralisation of this is the key thing for me, and the opportunity as we get closer is how can we actually get over the hill towards the virtualisation that is really going to liberate us to do this,” he explained.

“Then we can just simply place the people where they need to be. If that just happens to be on site, because there is greater value to them being there, or if there is greater value in being able to choose people from different parts of the world working collaboratively together with the kind of connectivity that will come in time.”

He believes the infrastructure to enable it is now ready. ATP has been using its own fibre network for the last five years, and he is seeing industry efforts, such as that from NEP (which was detailed in another FutureSPORT session) and the public cloud networks, beginning to provide a good platform from which to build. 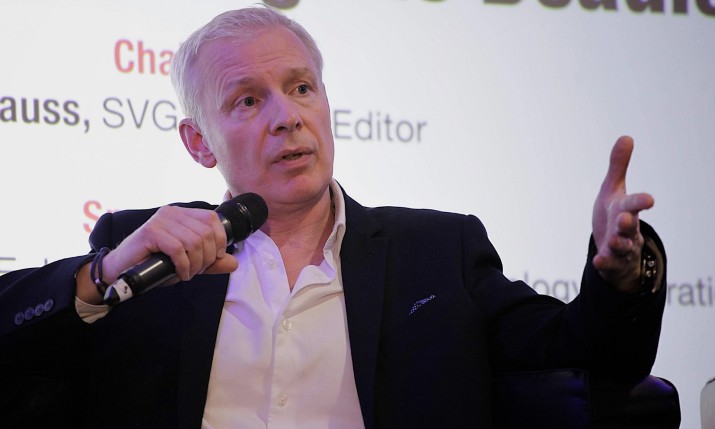 There are discussions still to be had about security and governance, but the next layer in the virtual tech stack he detailed, for orchestration, is also pretty much ready – allowing broadcasters to quickly “test and spin up resources at the time we need them and then spin them all back down.”

By being able to use these resources only when needed, and even share them, it reduces waste and power consumption, making production more sustainable, a requirement that was a recurring theme at the conference.

Being able to cut and paste that orchestration would be ideal for when Warden has to handle concurrent tournaments “all requiring the same resource, but twice or three times.”

The area he is struggling most with at present is the application layer, where he is waiting to see what broadcast manufacturers are going to do next as they move from the hardware-only world to a more managed, software-as-a-service model.

Over the next three years or so, there will be more than 50 major broadcast rights deals in play, “which will determine the majority of the cap-ex and hardware spend” for a lot of broadcast companies. “The danger, for me, is that if we don’t understand what the timescales of this move to virtualisation is going to be then, potentially, we’re going to end up stuck in a cycle of investment which is effectively going to kick this can further down the road and get us much further away from where I believe we should be going.”

He admitted that all the investment in hardware over the years “has served us incredibly well,” but if the manufacturers are to continue to be our partners in future we need to know that “they really understand that my pivot needs to be happening soon so that I can change my strategy going forward and align it with those strategies that I know the other layers in this [tech stack] are putting together themselves.”

Extreme E is a new motor sport series involving “the world’s most powerful off road electric vehicles competing in a championship staged on the world’s most remote race tracks” to highlight climate change – a bit like an electric version of the Dakar Rally, taken to extremes. 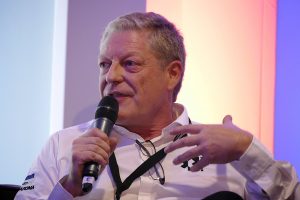 It is “quite different from many other sports. We don’t have circuits or stadia to visit – or connectivity,” explained Dave Adey, Extreme E, head of broadcast and technology. “We’ve chosen to go to these ridiculously remote places,” such as the Brazilian rainforest, a Greenland glacier, the Himalayas or the middle of the desert. “So, we have to be very self-sufficient. There is no infrastructure there – whether power or connectivity.”

As a start-up company, it wants to outsource much of its facilities, and is looking at an op-ex rather than cap-ex model.

It will have five events in its first season, each run over three days. “The amount of time we’ll be using that equipment, it makes no sense for us to be cap-exing that,” he said.

Warden believes that the managed service layer in the tech stack has a lot of potential. Having heard from NEP in an earlier session about its offerings for remote production, and talking to ATP’s own partners Gravity Media, he feels these are very positive developments. It will involve considerable investment on the managed services part, but it could mean they offer the complete tech stack.

“In defence of these service providers and manufacturers, you are asking them to do something that fundamentally changes their business model”

“The opportunity that I get with virtualisation gives me all sorts of things I never had before. We could centralise all our production in one place, but no matter how much spare power and cooling capacity [and redundancy] we’re sticking in, ultimately we’re still doing everything in that one vulnerable place. The opportunity is to spin up these resources in different continents around the world and then we can work in the least latent environment towards that data centre where the processing is happening.” Localisation and delivery can also be done there, so all the production can be completed in that one cloud-based environment.

He has been talking to manufacturers about where their roadmap is going for virtualisation for three years, and is beginning to see “some elements of real movement in this”, but no real timeline for when these elements might be delivered. There are also other answers needed, such as what happens with licensing models for this?

“In defence of these service providers and manufacturers, you are asking them to do something that fundamentally changes their business model,” said session chair, and SVG Europe editor, Will Strauss. “Is there a danger that some of these companies will become irrelevant if they don’t change?”

While Warden admitted that is a possibility, just the same as how a lot of hardware editing manufacturers disappeared after non-linear editing came in, he believes that “nobody need lose, ultimately, if we all plan and engineer the pivot that we all ultimately need to make. This is a small enough industry, and by working together to engineer that pivot I think we will all get there.”

Adey believes that any manufacturer that isn’t able to offer this SaaS model will risk others coming in to fill that void.

However, not everyone is going to adopt “this sort of relatively complex model that suits big events,” he added. “There is still a market for vendors that want to go through the life cycle of their hardware, but they need to, as that’s declining, increase the whole software model.” For those broadcasters who have invested in hardware, he feels they should continually redefine the ecosystem, to ensure it works best for them in the short term. “Every six months, you’re re-evaluating it, and that rate of change of technology is easier to achieve on a software-based ecosystem than hardware,” he said.

“It is a bit ‘adapt or die’. That sounds a bit harsh, but these are the challenges – and opportunities.”

Adey would like to see everyone get involved in shaping this transition, from the client layer through to the service providers, box manufacturers and connectivity providers. “Here’s an opportunity to re-define how we take sports broadcasting into the future,” he said

Warden is hoping to see more software-based versions of equipment at NAB. He knows some of this development is happening, “but there is not enough of it. It is making me, and many others, in this critical time with all those rights deals coming up, really seriously evaluate; and the knock-on effect is: what partner do I choose to be service provider based on whether or not the hardware I can use is virtualisable or not, because that’s the direction of travel I want to go in.”