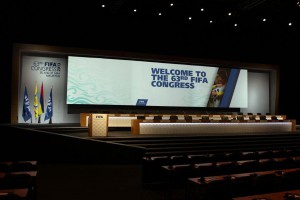 The Gearhouse Group of companies recently took charge of all technical requirements ahead of the 63rd FIFA Congress, which took place in the Swami Vivekananda International Convention Centre (SVICC) in Mauritius. The opening was held on 30 May and the congress took place on 31 May, and Gearhouse’s involvement included technical duties for the Opening Ceremony.

Originally, Pieter Joubert, technical director of the opening ceremony, was briefed to advise on the technical and set aspects of the Opening Ceremony only, but it soon became apparent that the actual Congress would require extensive support as well, due to the limited resources available on the island. As both the opening and the congress were to take place on the same stage, in the same venue, with only 12 hours and a rehearsal in between, this became quite a challenge.

What ensued was a lengthy planning session involving David Bloch, Zurich-based events company Rufener Events (represented by project director Lisa Tschanz) and the Gearhouse team. Together they pulled the event together successfully with planning commencing as early as September and Joubert joining the second series of site inspections in October.

Gearhouse and Sets, Drapes, Screens (SDS) were appointed as service providers, while all set designs were produced by Bob Klenk of OceanSalt Set Design. The result was an island-themed look and feel, complete with palm trees and a volcano, utilising a panoramic screen for background visuals. The Opening Ceremony was inspired by the creation of the island itself and specifically the five elements: water, earth, wind, fire and air.

All technical specifications were managed by Bullitt Productions, headed by Marco Gutensperger. Gearhouse SA supplied all lighting, rigging, audio, generators and power infrastructure, as well as content editing of the Opening Ceremony visuals. Projectors were supplied by PRG, Switzerland.

For the Congress set-up, the room was completely turned around to accommodate 2,500 delegates seated schoolroom style as well as 32 committee members seated at custom built desks. A variety of Gearhouse companies were involved in the entire planning and execution of the congress.

Given the tight turnarounds involved, both lighting and audio rigs had to be designed to service all technical aspects of both these very different events without any changes between events. The set was all pre-manufactured in South Africa by Sets, Drapes, Screens from designs by Ocean Salt, and needed to be fully assembled in three days. Transforming the set after the Opening to suit the congress required crucial planning at the manufacturing stage, but thanks to effots by SDS the transformation was made easier by a 24m x 4m wide screen that was removed after the opening to reveal another screen of the same size, built into the proscenium at a different position, which set the stage for the congress.

“Having the group of Gearhouse companies involved always make your life easier. They have the knowledge of doing big events abroad and the infrastructure to manage these types of events successfully,” comments project manager Pieter Joubert. “Of course, for the client, having single-source access to all disciplines is the key to a stress free experience. That is truly the advantage of contracting this group.”