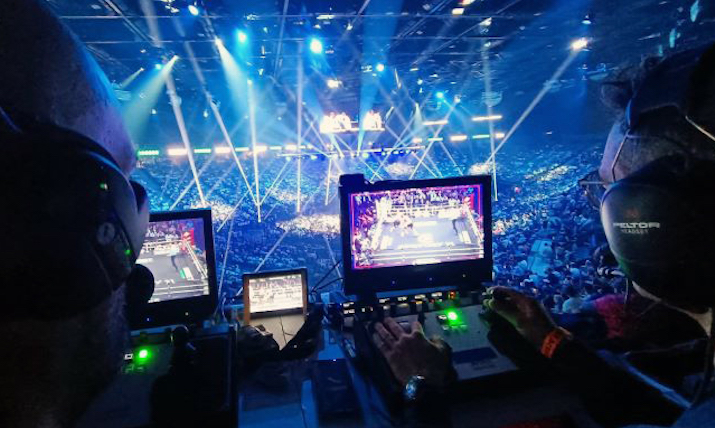 On May 14, Tony Yoka and Martin Bakole met at the Accor Arena in Paris for a much anticipated, and twice-delayed, boxing match. The event was dubbed ‘La Conquête’ in France. Yoka, the winner of multiple Olympic gold medals and the European Union heavyweight champion, was on his 12th professional fight and fighting in his hometown. Viewers around the world joined the capacity crowd to eagerly enjoy the event.

Canal+ handled the live French broadcast which was directed by veteran Laurent Lachand. The production was organised by System Event, a local provider of technical and logistics services. Thanks to the participation of Groupe TSF, a Paris-based provider of television and film products and services, Movicom’s Robycam cable suspended camera system was involved in covering the event as one of several specialty cameras.

The Robycam system can be used in either 3D (4-point) or 2D (2-point) configuration. As the production team decided to use the 2D system for this event, it was easily rigged to truss that was strapped to the existing infrastructure of Accor Arena. To ensure safety for the system, just like all the other specialty camera systems, the install and operation was checked and verified by Bureau Veritas, a world leader in testing, inspecting and certification.

Lachand said: “The COVID crisis, and its empty sports arenas, gave the Canal+ group time to rethink how we approach our productions. We were intrigued and looked carefully at aerial cable camera systems, we decided to go with the Robycam. Robycam is a very flexible tool. It gave us a chance to re-envision our flagship events. On boxing it’s the centre of our broadcast. We chose to use it in a 2D configuration, allowing not only the traditional lateral movement of a cable camera but also the option to go up and down in elevation. This degree of functionality made shots from the Robycam a must. These are more powerful and spectacular than crane shots, especially for times when the boxers aren’t in the ring – such as when they enter the arena and approach the ring. The Robycam is most useful in the shooting of fights for a top-down perspective in coverage. It is very immersive; we could easily follow the chosen boxer to his corner and watch what happens between rounds. Within the framework of a production, this multitude of possibilities of positioning becomes a real asset, much more so than traditional capture tools.”

The system was able to span the entire arena, covering more than 115m, which allowed for incredible over-head wide-angle shots of the arena, including the capacity crowd. The Robyhead (the gyro-stabilised head of the Robycam system) carried a Sony HDC-P1 camera with Canon 14x HD wide-angle lens providing full HD broadcast pictures for the production, which was beamed worldwide and on pay-per-view.

It took only a small team to assemble and run the Robycam system at Accor Arena – the pilot, a rigger, a tech and a supervisor. The system’s two winches were placed discreetly in the upper decks of the arena around unused bleacher seats. Even in 2D configuration the Robycam system has the advantages of blocking out safe zones and pre-recording moves to play back at any time.

Despite all the tech on display and much to the disappointment of his hometown crowd, Yoka lost the fight, in a decision, to challenger Bakole after 10 brutal rounds of combat. Despite Yoka’s loss the fight set records for pay-per-view viewership online and in several world markets.