Hitting the cricket highlights: how Channel 5 puts together its evening show 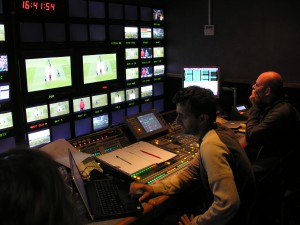 Highlights of international games involving the England cricket team are shown in the UK by Channel 5. Taking output from Sky Sports, but utilising its own commentary team and cameras, the terrestrial broadcaster has been responsible since the 2006 season for the, generally, hour long evening programme. Production for the programmes is handled by Sunset + Vine, part of the Tinopolis Group.

“We cover 47 days of cricket each season,” explains Naveed Raja, programme producer. “We receive a clean feed of the Sky Sports transmission, alongside the output of several of their cameras and a clean audio effects track so we can produce our own cut of the games.”

Supplementing those feeds, Sunset + Vine employs its own camera with various cable drops around the ground for Channel 5 introductions, interviews, links and exclusive shots. It is also used for the exclusive analyst’s view provided by Simon Hughes.

Raja’s production team is located in a truck provided by NEP Visions. This vehicle has been recently branded with a Cricket on 5 logo, so that maximum publicity can be gained as it travels the country between grounds.

He goes on to say that Sunset + Vine receives its own Hawkeye feed independent of Sky’s use. “It comes to us with our own Channel 5 branding. In addition, we can call up different deliveries and other information, if required, for our analyst pieces.”

During play, Raja notes each incident that could make the highlights programme with a description and time code. These are passed to James Boyd who is responsible for overseeing the edit needed to produce the evening transmission. 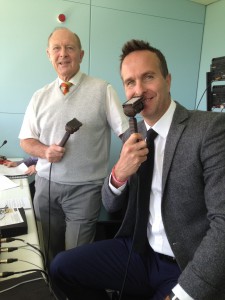 Raja continues, “We use an IP Director MAM for logging/searching/archiving material. For editing, we use a linear system based on a Sony 9100 controlling an EVS. We start editing the opening sequence soon after play starts and then carry on editing throughout the day going directly on to HDCam tape. This system is used because of the time constraints we find it is still the quickest and most efficient way of turning the coverage around – especially if play goes on late and we are already on air with the first part of the programme.”

When it comes to graphics, Sunset + Vine uses Alston Elliot – utilising the same Vizrt system as the Sky Sports coverage. “Although we have our own design and branding, we do share the graphics database with Sky.”

Sunset + Vine’s own production team and graphics operator compile and enter player and match statistics. “Our commentators receive a ‘stats-pack’ ahead of each game which is a mixture of material from their own research and data provided by the producer.”

Where the game is a Day/Night fixture with play starting at 1400 hours and extending into the evening, the highlights programme is aired at midnight. In most cases, Channel 5’s playout facility will receive the tapes ahead of transmission. On occasions when this is not possible the edited programme will be played ‘live’ from the OB truck, although this means the vehicle cannot leave for its next location until very late!

For the more traditional match time frame, the programme on Channel 5 is transmitted at 1900 hours. That turnaround is still tight, especially if play continues beyond the anticipated finish time of around 1800. If necessary, Sunset + Vine has the ability to provide closing comments ‘live’.

“It has happened, but very rarely,” confirms Raja. “In 2013, in Durham when the Ashes series was not decided until play finished at about 1950 hours, we needed to wrap up the edit, do an interview and come off air by 2000 hours. That’s pretty tight, but we made it.”