New features announced at IBC 2019 for Limelight Networks’ Video Delivery Services include expansion of the company’s global network to almost 50 Tbps of egress capacity and its edge-server capacity by more than 40% since January.

This increased capacity ensures that critical quality metrics — such as rebuffer rate, startup time, and bitrate viewed — are improved when Limelight’s Content Delivery Network (CDN) is deployed for live and on-demand video delivery.

Live Push Ingest (LPI), a new service functionality available in Q4 for live streaming over HTTP, will allow customers to send their packaged HLS and DASH streams directly to the Limelight CDN for onwards delivery to the end user. 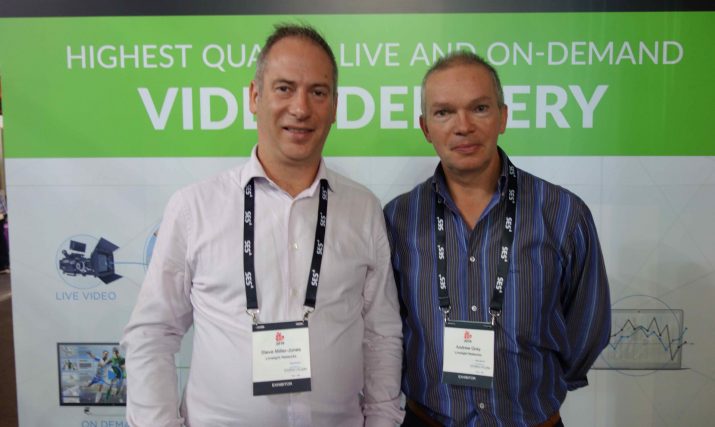 Steve Miller-Jones: “We’ve consolidated our position as a leader of high quality global video distribution. Looking at this year we’ve been heavily involved with the Cricket World Cup and we’re strongly engaged with major events next year.

“I think we’ve done a really good job of solidifying our position in high quality CDN video delivery. There’s a white space there for us, which we are occupying.

“We’re now at over 100 locations, with growth from 30 to about 50 terabits per second capacity in the network. Still a single network: we’ve maintained our philosophy of a dense architecture and distribution into the right network locations, giving us this ability to drive quality through the video delivery workflow.

“Time and time again, where we compete on quality metrics, we come out on top. We are architected and built for scale, and we’ve consolidated some of our security positions.

“As we move forward to next year, in addition to being a high quality video provider, we’re also looking at latency – not just from a video perspective but where it matters for the pipeline and workflow around video. So we’re going to be launching some edge services, where, if you need to bring your watermarking with you, we encourage you to come and do it in the network as an application in our distributed compute platform.

“We’ll be talking about taking your workflows to the next step in broadcast distribution, bringing your components and deploying them alongside us in our Fog player — in between the last mile and the cloud. We’ll be launching a distributed computing application platform in that layer – probably before NAB. Alongside being a CDN at scale we’re a compute platform at scale as well.

“Broadcast workflows have gone to software processes,” continued Miller-Jones. “The digital transformation is that the broadcasters and sports producers are software people.

“What we’ve found in the video workflow is that, at the point of packaging, usually the CDNs come and get the stuff. What people are saying to us now is that they want to own the last step.

“So here at the show we’re launching Limelight Live Push Ingest, which is an environment to push content for live broadcast streaming. It brings more robust redundancy to that service layer; puts the broadcaster firmly in control; and gives us a scaled environment to work with for distribution.”

Some of the trends we’re seeing at the show include content personalisation, remote production and even virtualised production. At Limelight Networks are you happy that the positioning you describe here is in line with the changes in the way large live sporting events are being produced?

Steve Miller-Jones: “We’re seeing personalisation and data layers in sport. In addition to just sending the picture, content owners are sending other information that allows them to innovate – and we’re right there to support them.

“So yes I think it’s a sign of the maturity of that evolution, and a sign that the standards are good enough and the content producers are confident in their own capability to drive that kind of innovation.

“It’s an exciting time for sport. There are so many events, and so many rights available to make it more accessible with more direct to consumer platforms. There’s a lot of excitement about how to make the content personalised and how to innovate around consumption.”

Andrew Gray: “The other piece for us is about geographic expansion. We’re focusing on two or three main regions in EMEA at the moment, but also we’re now diversifying more and getting stronger in areas like Italy for example.

“We’re penetrating further into the Scandinavian through our relationship with Media City Bergen, and on a more ad hoc basis in the Middle East as well. So not just UK, France and the German markets – but beyond that and wider as well.”

Steve Miller-Jones: “We’ve had some good conversations with the sports community here at IBC. Obviously, where the rights are held and who has the distribution rights largely drives our conversations.

“But bringing the technology to life in live sports workflows makes sense, as the area of online video is going to drive the most growth. So it makes sense for us to be able to describe how this works into the workflows of the content owners, rights holders, producers and platforms. We are a key part of the distribution channel,” he said.