Inside Wembley: Froch-Groves 2 packs a punch for Sky Sports 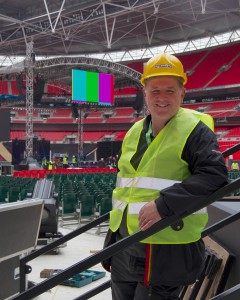 The Froch v Groves rematch was one of the biggest boxing matches in UK television history. You’d have to go back to 1939 for a fight that attracted more than the 80,000+ spectators that turned up at Wembley Stadium, and a million or more watched on Sky Sports Box Office.

However, while the week-long build up to the event created high anticipation, there was at least as much tension involved in the overnight rig that turned the stadium around from hosting an England v Peru football game on Friday night to doors opening to the public at 5.30pm on Saturday.

The football was broadcast by ITV (using Arena Television OB trucks), which had to be derigged, including pitchside advertising, before hard standing, including an access road was installed to allow the ring and some 7,500 seats to be put on the pitch.

The stadium has a lot of permanent cabling that is great for football, but new cabling had to be brought in for 20 of the 23 cameras for the fight. With so little time to install everything, they couldn’t bring in anything that required a lot of rigging, such as a Spidercam. “It’s low on gimmicks, but big on coverage,” said Sky Sports’ Production Manager, Martin Knight.

“We’ve tried to keep it simple technically,” because of the time constraints, added Keith Lane, Director of Operations, Sky Sports. “We’ve not added a lot of extra features that would take too long to set up”.

Because of the risk of rain, there had to be a canopy above the ring, which also held the lighting and big screens for the sell-out crowd. “All that had to be in place before we could worry about putting in cameras and commentary,” explained Knight. It meant there was a very little margin for error. 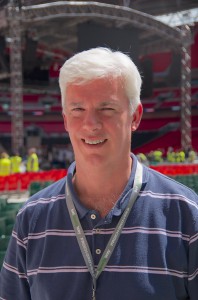 They had done a rehearsal, after the FA Cup semi finals with Wembley, to build the canopy, screens and lighting, “to see how fast it could be turned around. Then we had to work out if, after that, there was time to cable it and put all the facilities in place,” and to get them working, said Knight.

On Saturday there were “some complications we hadn’t foreseen,” with the simultaneous cabling, seating, pyrotechnics and presentation installation — and extra people — adding difficulty. When cabling through ducts in the floor began about 4.30am, some essential hard standing was still unfinished.

Considering all the different companies that had to combine to get everything done on time, with some 500 people working on rigging and production, Knight said “their co-operation has been exemplary” and “I haven’t heard a cross word. It’s been a real team effort across the board.” At 2am the first vehicle was allowed in, but the facilities check had to be done by 2pm, with the first match at 6.30 and the main fight about 10pm, as the final bell had to happen by 11pm — due to noise restrictions.

It was the first boxing match Wembley has hosted since the new stadium opened in 2007 and “our requirements are quite different from the concerts Wembley is used to,” said Lane. Indeed, the One Direction concert this Saturday will have had five days to set up.

Even if ITV and Sky used the same OB company, almost everything would have had to change. “The cable infrastructure put in for the football wouldn’t have been relevant for the boxing,” he added.

“Boxing has been a mainstay of Sky Sports coverage for a long time now,” said Lane. “For a few years it’s gone quiet in terms of big fighters, but a new deal with Matchroom has resulted in going to bigger venues because it’s becoming more popular again.”

Although Matchroom is the event owner, Sky does all of the production — “it’s a real crossover between the two companies,” he said. “Our intention is always to do the biggest fights we can in the biggest arena we can, but these sorts of fights don’t come up very often.

“It was a great fight the first time round between Froch and Groves, so there was a lot of interest in it,” particularly after the way it ended. “It was a controversial stoppage, which enhanced the appetite.”

Sky did a lot of promotion in the build up to the fight, including anchoring all of Sky Sports News from Wembley on the day, and boxing is doing well in the ratings. Sky is doing fewer fights per year than previous years, but they are now bigger events. “A big fight like this has all the components for a pay-per-view event,” he added.

Although covering the fight is the priority, Sky also wants to do more analysis, with high frame rate cameras, hot heads and miniature cameras. It used 23 cameras at Wembley, “which is a considerable amount for boxing,” centred, as it is, just on two people in a ring, he admitted.

“We’ve always tried to get close audio, but this is difficult when there are 80,000 people screaming at the same time.” They used 5.1 surround sound to try to capture the atmosphere, while retaining the visceral sounds of the fight.

Being an outside arena, there were more challenges trying to get the balance right. “It’s always a challenge in boxing, but more so here,” he added. The stadium was packed, with people eager to soak up the atmosphere, “but they also want to see the action close up,” said Lane. This required big screens installed above the ring (by XL Video), something that it initially seemed mightn’t be possible to rig in time- – one reason for the rig rehearsal.

Lighting was provided by HSL, which specialises in concert and event lighting and does all of Sky’s boxing events.

They used ACS for some specialist cameras, “because they are used to Wembley and all the infrastructure — because time is against us,” explained Lane. ACS provided the hot head in the ring, another static camera high up and one looking down Wembley Way to get the crowds coming in.

Lane would have liked to cover the fight in 3D. “We really did consider doing this in 3D, but putting the additional cameras and infrastructure in was considered a step too far. We didn’t want to compromise our HD coverage,” he explained. “Boxing in 3D looks fantastic,” but without a requirement from international broadcasters for it, the fact that it would have really needed another day to rig and test went against it.

Saved by the bell 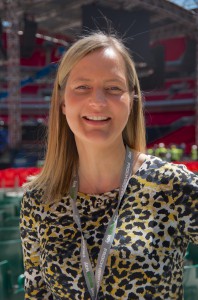 The production took a lot of planning, and lots of people, to get everything done on time, but “we’ve also had to radically modify how we work on this, especially the lighting, as there’s no roof to attach it to,” said the show’s director, Sara Chenery, a boxing specialist.

“Our challenge was how to bring it up to our production standard. We’ve only done very basic ring lighting and we’ve tried to do as much periphery pyrotechnics lighting as we can. We would always check this the night before, in darkness, and we’ve not been able to. We had to rely on people’s experience.” However, she thought the end result brought “a little extra pizzazz” to the production, and said the experience of pyrotechnics provider BPM “showed through.”

To match the occasion, they also put in more cameras, including one above the ring and two jibs, and put a presentation platform on the pitch, to have them as close to the action as possible. “It’s about bringing as much atmosphere to the audience as possible,” she said.

Getting the screens in place was “a logistical nightmare. We were originally told it wouldn’t be possible in time.” The time constraints also meant some things, such as the ring walk, were essentially unrehearsed. “That’s why we rely on people who know what they’re doing,” she added.

“We had a few little technical hitches,” she said afterwards, but the audience and spectator reaction was very good. “We were told it was mad to try it, but it worked.”

If there had been more time, they would have put in more moving lighting, and more audience lighting to capture the atmosphere. However, she was really pleased with the ringside presentation and the helicopter shots (there were two passes of the helicopter — early on and from about 9.30 to 11pm for the main fight).

Despite the time constraints “it went very well, with no technical issues at all,” said Lane afterwards. “It was always touch and go in hitting all the points, such as the facilities check. We were 45 minutes behind at one point, but got everything tested.”

The ring walk, as the fighters came on, happened slightly faster than expected, as the boxers were so keyed up. “All the pyrotechnics, flames, and special effects did as we expected, but it was a bit quicker than planned.”

Lane would like to have done a few things differently, “but considering the timescale we were up against, everyone made a magnificent team effort.”

Telegenic provided 54 technical crew, plus its T21 truck, which does most of Sky’s boxing, an edit vehicle running Premiere, and a technical trailer. It also provided the international feeds, including commentary for TV in Argentina and BBC Radio 5. Also on site was CTV, looking after HBO.

Broadcast RF provided Telegenic with three wireless cameras, compared to just one for most fights, with additional infrastructure, such as extenders in the dressing rooms for the walk to the ring. 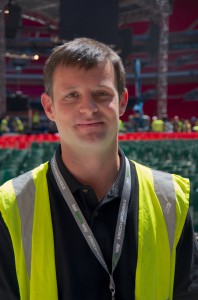 “There is little SMPTE fibre in the stadium — just six points installed for 3D — although there is single-mode fibre and triax, and it’s a very difficult stadium to rig,” said Telegenic’s Unit Manager Martyn Edwards.

Everything that was ringside was SMPTE fibre, with runs of about 100-110m, which is short enough to run power. The longest run was 250m to the reverse Sony 3300 3x high-speed camera. There were also two NAC Hi-Motion II cameras, from Fletcher UK. The rest were Sony HDC-1500 and 2500 cameras.

There was also an extensive wireless audio installation, from VME, including four handheld mics with lazy functions (so the presenters could talk direct to production). The NAC cameras were in the corner of the ring, so “they get really good coverage. They are at the height of the fighters,” said Edwards.