Joshua vs Klitschko: Overcoming the logistical challenges of a huge international OB 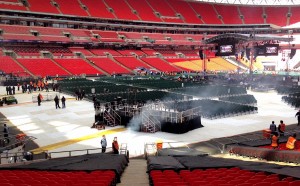 The HBO and Showtime presentation areas in the foreground at Wembley, with the Sky Sports platform in the background

Last Saturday’s title fight between Wladimir Klitschko and Anthony Joshua attracted huge international interest, but trying to fit three international broadcasters plus the host broadcaster and a world feed broadcast into a packed arena created huge logistical challenges that were compounded by two demanding promoters and a full undercard.

The last time Sky Sports did a major boxing event at Wembley (for Froch vs Groves) it was essentially an all-English affair. This time, there was “quite a bit more international interest. We’ve got HBO and Showtime from America, and RTL, all on site with full commentary facilities, their own cameras and their own trucks, so it’s quite a big logistical feat to put everybody’s requirements onto the camera plan, on to the OB parking, on to all the feeds around stadium,” explained Jennie Blackmore, Production Manager, Sky Sports.

This had to be done “without compromising our own coverage, which is difficult,” added the OB director, Sara Chenery. “We’ve been the host broadcaster several times, but the problem with this one as Jenny said is that we have everybody else’s requirements and they’ve all paid a lot of money for the event and they are all major stakeholders that have quite a lot of demands, so they’re not just taking our feed.

“It’s important that we try our best to facilitate them and give them what they would expect, what they feel they’ve bought from the promoters; but at the same time we can’t compromise what we expect and what we need to do because it’s such a big pay-per-view event for us and for Sky as a business.”

It was a matter of juggling what each broadcaster wanted, which was tricky. “We’ve had to say ‘no’ a couple of times but then try and come up with other solutions for them because they have their expectations and their agreement is obviously with the promoters as a third party as ours is with the promoters. But we can’t then say ‘right well you can’t do that’, because they’ve obviously bought the fight as well, so it’s a logistical nightmare for Jenny to organise it all and to make sure that everyone has everything that they expect and at the same time making sure that everything for us is the same standard that we would always have.”

A further potential obstacle was that there were two joint promoters (Matchroom for Joshua and KMG for Klitschko). “You’ve got to take into consideration their views, their feelings about things and time scales and arrangements and meetings and so liaise with two separate parties as opposed to the one,” added Blackmore.

“Their main thing is that everything is 50-50,” whereas often in a fight, there is one big name, one boxer who is expected to win. “It’s not that often you get completely 50-50 fights, so they’re both 100% as promoters invested in their man having the same treatment; the same special effects; the same exposure; the same amount of promos; not to be kept waiting in the ring longer than they should be. We’re completely impartial, but you still have to make sure that you are making everything for them exactly what each promoter wants and we’re not compromising ourselves,” said Chenery.

There are also the demands from the other broadcasters 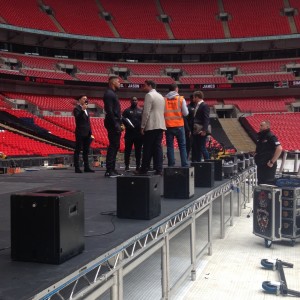 Typically, there would just be two cameras on the main platform, perhaps three if there is another broadcaster, but in this case there were five. “That’s quite difficult and also with there being two broadcasters from America who are effectively rivals of each other, then everything one of them would like, [the other] would like as well because everybody has paid a lot of money for the event, so everybody wants to make sure they have the same standard of everything.” This can prove difficult where there might be room to squeeze a single extra camera in somewhere. “We’ve had to have a lot of site meetings with them to say ‘this is what we can offer – this is what’s physically there. We’ll compromise, you know, and we’ll make our studio a little bit smaller and we’ll move it slightly so you can fit one in as well, but there’s only so much space’ and it’s not always up to us as well. There’s obviously the health and safety side,” she explained.

Fitting in all the presentation positions was another problem, as the capacity 90,000 crowd meant the arena was filled with ticketholders who spent a lot of money. But “broadcasters still want their presentation to look the same as it would back in their home country, so they’ve got a certain size desk that they want to fit in, they’ve got a certain look to their pres platform that they want to fit in, so therefore they need a certain amount of space. That was quite a juggle,” said Blackmore.

RTL had to build a platform quite high in the stands, while Showtime and HBO had similar sized platforms on the floor level. “But, of course, the site surveys take place after tickets have gone on sale,” so finding positions within the space that was left proved “a bit of a challenge but everyone’s got what they wanted.”

Besides its own output, and one for the screens at Wembley, Sky also produced a super clean feed with Sky presentation elements, but no graphics or replay transitions on it for the other broadcasters. The international feed (based on the super clean but without the presentation elements) was provided to some 144 countries by Matchroom, which used an OB from Links Broadcast. 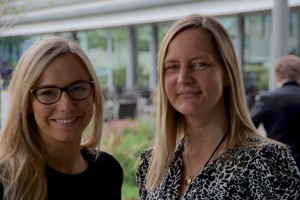 As the host broadcaster “we’re a little worried about having other cameras doing something that would impact on our reputation,” said Chenery. “Our cameramen would never go in the ring until I say it’s okay but, of course, you get someone who’s over-exuberant working for someone else – we don’t have control of them.”

Fortunately, all the planning paid off, and this wasn’t a problem on the night, but there are differences in how the boxing authorities handle these things with broadcasters in other countries, so something that a German or American broadcaster is used to doing at home, may not be allowed in the UK.

For example, in the UK, nothing is allowed to be on the ring, and unlike in the US, no one can step on the bit of ring outside the ropes, which is why there is a box built out on two of the corners for the handheld cameras — whereas in America cameramen can walk up and down the side of the boxing ring.

Sky had three floor managers in the arena: one on its presentation platform; another one covering ring walk and ringside; and a third based with the international broadcasters to “make sure that their lights aren’t up during boxing, and they’re not bringing people to and from the ring and doing interviews ringside,” said Blackmore.

There was a problem at a previous London event, at the O2, “where when we do the main event we have everything blacked out and you see this amazing shot of everyone on their camera phones with their lights on, and it just looks fantastic,” said Chenery. However, one international broadcaster left its studio lights on, “so when our jib camera does this amazing panning shot. It looks fantastic and then there’s [broadcast] lights on, and it’s just so frustrating.” Which is why they “bullet-proofed ourselves this time” and said “just to avoid any confusion there will be a time when we say everyone’s lights have to be off now and we will have people available to make sure that that happens.”

However, they do have “very good working relationships with HBO and Showtime and RTL so we’re very lucky like that we’re not at loggerheads with them,” plus “an amazing relationship with the British Boxing Board of Control” and with Matchroom as promoters.

“We go over to America and Germany quite a bit ourselves as the foreign broadcaster, so when I’ve got them asking me for help with parking and accreditation and power requirements and positions I’m very conscious that very soon I’ll probably have to do the same to them, so we’re keen to help them out as much as we can,” added Blackmore.