Don Ohlmeyer, a singular force whose creative vision and talents reshaped not only sports broadcasting but the entertainment side as well, has died at the age of 72. He began his career at ABC Sports and as a producer there transformed shows like Wide World of Sports and helped Monday Night Football set a template for big-time prime-time productions. 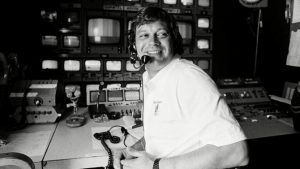 “From the first day I went to work at ABC Sports, it was like giving heroin to an addict,” Ohlmeyer said in 2008 during an interview for his induction into the Sports Broadcasting Hall of Fame. “I just absolutely loved it; I couldn’t wait to go

to work. I was mesmerized by how shows were put together.”

Spreading his talents across multiple sports, networks, and genres, Ohlmeyer took chances with personnel, production choices, and technology, constantly pushing for new ways to better tell the story. In 2008 he was inducted into the Sports Broadcasting Hall of Fame and his speech and a tribute video can be seen here.

Ohlmeyer’s own broadcasting story begins at the University of Notre Dame, where he spent his college Saturdays working as a gopher for ABC Sports.

In the early 1960s, ABC had no rights to the big-ticket championships, so, as the underdog of sports broadcasting, Ohlmeyer was charged with turning second-tier events profiled on Wide World Of Sports into first-class productions.

As producer of Monday Night Football, Ohlmeyer began telling those stories to a mainstream audience. Introducing the first in-game updates, the consummate risk-taker paved the visual path to the modern football telecast.

Ohlmeyer’s vision had always been to touch his audience, to make them feel something, from the pain of the massacre at the 1972 Munich Olympics to the ironic hilarity of comedian Dennis Miller on Monday Night Football. Lured out of retirement by Howard Katz, then president of ABC Sports, Ohlmeyer returned to his roots in 2000 to produce Monday Night Football for one final season.

“Don was the one producer who could transform the show into something magic and get people talking about Monday Night Football again,” Katz said. “Don was unique in his ability to bring not just sports knowledge but true showmanship to a primetime program and make it something out of the ordinary.”

In his second stint with the show, Ohlmeyer dramatically changed its visual and graphic look, added a healthy dose of his trademark controversy, and put the template in place to return Monday Night Football to its glamour days.

In the two decades between his Monday Night Football stints, Ohlmeyer produced and directed three Olympic Games, served as executive producer of NBC’s sports division, formed his own production company, and returned to NBC as president of its West Coast division, bringing the network back to primetime dominance with “Must-See TV.”

Still, “I never really left sports,” Ohlmeyer says. “Even when I went to NBC as president of West Coast, I made part of my contract that I could still direct the Indy 500.”

Sports continued to infuse Ohlmeyer’s life as well as his curriculum in his final years where he was an adjunct professor of communications at Pepperdine University. Having found a way to give back to a business that gave so much to him, Ohlmeyer ended his career teaching a new generation of television professionals to touch their audience, as he did so brilliantly for 35 years.