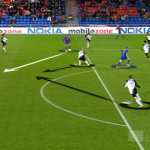 The Euro 2012 kicks off in about a month, and a number of new technologies are being prepped to make their debut during the event. LiberoVision’s next-generation of its Highlight system, Highlight 5, for example, is already slated to make its debut for at least eight broadcasters. Dr. Stephan Würmlin Stadler, CEO for LiberoVision, says the new version has four important additions, beginning with “virtual run.”

Virtual run brings full-motion video to post-play analysis. The previous version of Highlight allowed the video frame to be frozen and then have player images that are frozen in time to be moved around like chess pieces to denote where a player began and ended during a play. But the new version allows the video frames of the player moving from point A to point B to be run while the other players remain frozen in the frame.

“It allows the viewer to see the player in motion and then add other players in motion,” says Stadler, adding that it will take about 30 minutes to an hour to render out a highlight clip, making it suitable for post-game analysis.

Also new is “panorama stitch,” which stitches together different camera angles to create a complete pitch or field of play. With the complete field visible, analysis of a specific play can be more complete and offer a better perspective of where the players are relative to each other on the pitch or field.

“Greyboard” is another new feature, allowing the entire field and all players to be greyed out with the exception of the player or players who are the object of analysis interest.

The final advance does not have an application for football, but it does expand the market for Highlight. Volleyball, a sport which will be front and center during the Summer Olympics in London, will now have a set of LiberoVision analysis tools, giving commentators a variety of new ways to diagram plays and educate viewers.

“When we look at new sports, we have to see a value for broadcasters and viewers to tackle a sport,” says Stadler.