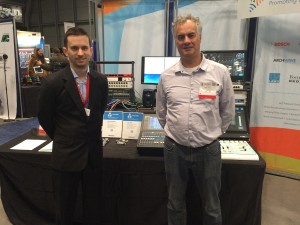 The AES67 standard – which has been devised to provide interoperability between various existing IP-based audio networking technologies – reached another significant milestone at AES 2015 in New York over the weekend with a major live demonstration featuring no fewer than 22 networked-audio devices.

Whilst AES67 can support both unicast and multicast transmission, the AES 2015 showcase was primarily multicast-oriented – mirroring the approach taken during the PlugFest testing carried out by the AES, in cooperation with the EBU, in Munich last year.

Speaking to SVG Europe, Kevin Gross – technical working group chair of the AES67-promoting organisation the Media Networking Alliance – highlights the involvement in the demo of multiple Dante-based products following Audinate’s recent adoption of the standard. “This is the first time there has been a public demo involving both Ravenna and Dante[-using] devices, so it’s a great opportunity to showcase the benefits of the AES67 standard,” he says.

Marketing Working Group chair Will Hoult emphasises the “amount of work that has taken place by manufacturers to deliver products which actually adhere to the standard” since it was ratified and published in September 2013. The current sense of momentum behind AES67 has also been fuelled, he believes, “by the general acceptance of audio-over-IP. We see many different implementations of that, but essentially what the customer wants to be able to do is take product A and connect it to product B – whether those products are using Dante, Ravenna or whatever – and know that they are going to work together. That factor has really helped to drive the conversation about AES67.”

As well as numerous manufacturers drawing attention to their AES67-compliance on the showfloor, the standard was also the subject of multiple conference sessions as MNA members continue to raise awareness.

Meanwhile, the AES and the OCA Alliance revealed that the OCA (Open Control Architecture) project – established to provide a public standard for the control and monitoring of professional media applications – is continuing to progress as planned. Hitherto referred to as AES-X210, OCA is now moving towards the final phase of ratification as proposed standard AES70.

“This has just reached the stage where everyone on the committee has agreed that it is ready for publication. That means there are now two steps left: internal review by AES executives and then a six-week period for public comment. I think everyone is hoping for a good Christmas present,” smiles Gross.