The Champions League Final in Berlin features the beginning of a new era for the NEP Group as NEP recently acquired Outside Broadcast. This is the first event where the NEP Group’s divisions NEP Visions and Outside Broadcast are on site (the latter in support of Canal Plus Spain) together. And already it paid dividends operationally. 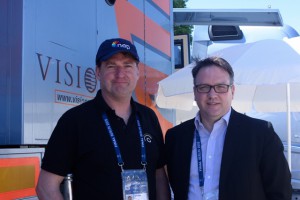 Marc Convents (left) of NEP Outside Broadcast with Brian Clark of NEP Visions at the Champions League Final.

For example, NEP Visions is supporting Fox Sports U.S., Deportes, and Latin America (both North and South) as well as BSkyB. The Outside Broadcast trucks were stuck in traffic and delayed due to an accident, costing valuable set up time. Says Brian Clark, NEP Visions, commercial and technical projects director: “We bottled up about 10 of our riggers and utilities to help them put cables in. Having about 16 people pulling cable is pretty unique.”

BSkyB is also on hand at the Champions League Final and the UK broadcaster will rely on NEP Visions Atlantic OB, bringing the total number of OB vehicles on site from Visions to nine.

The interaction between NEP Visions and Outside Broadcast is still in its early days according to Clark but he fully expects the European expansion of NEP to benefit the group and also bring a new dynamic to clients.

“We have to maintain the relationships with clients we already have and continue to give the best service,” says Clark. “It is what we and others in the group excel at. We want to acquire good companies and build from there.”

“This is pretty much a separate operation from the Women’s World Cup as the studio in Los Angeles will be used for pre-, halftime, and post-match coverage for Champions League,” says Kenney. Fox Sports U.S. will also use BSkyB commentary as its top broadcast teams will be in Canada. Fox Sports Deportes and the Latin American networks, meanwhile, each have their own commentators on site in Berlin.

NEP Vision’s Gemini remote production unit, with two trailers, is on hand for the Fox Sports coverage. Gemini 1 has two controls rooms, the first of which will be used for the North and South Latin America feeds, each of which will also have separate audio commentary. The second control room in that unit will be home to Fox Deportes. Fox Sports U.S. will operate out of the second unit, Gemini 2.

“We no longer have to split one control room in half [for Fox U.S. and Deportes],” says Clark. “That gives everyone more freedom to do things as there will be in excess of 20 feeds coming in from the technical operations center and then presentation and commentary will be patched in.”